The world's biggest coal miner and consumer produced 3.84 billion tonnes of coal in 2020, data from the National Bureau of Statistics showed on Monday. 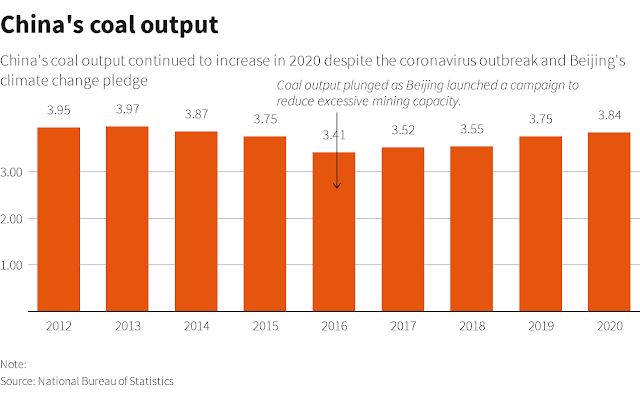 LAST Wednesday the wind died, and Britain’s fleet of thousands of wind turbines mostly stopped turning. The engineers at National Grid had seen the problem coming: temperatures and wind speeds had been low all week, and were forecast to fall further. Their response was to issue a ‘margin notice’ – a warning to generators that extra capacity was going to be needed. Prices rocketed from their normal £40 per megawatt hour to over £100. Some held off taking this remarkable price, and when the grid still couldn’t balance supply and demand in the evening peak, were rewarded with even higher sums.

On Thursday, with wind speeds even lower, prices for balancing during the evening peak shot up again, reaching £1,400. By Friday’s peak, that figure had risen to a record-breaking £4,000.

The reason is the strong expansion of volatile renewable electricity generation and the elimination of large backup power plants in Europe. The output of 50 gigawatts going offline in Europe corresponds to “more than two hundred Danube power plants”. According to Wien Energie, the electricity grids are exposed to ever greater fluctuations. The number of emergency operations has increased from around 15 to up to 240 per year in recent years.

As a result of the “phasing out of nuclear energy and coal power”, a considerable amount of secured output will be shut down “without replacement” in Germany in the coming years, according to Seyfert. Regionally and throughout Germany, this leads to considerable challenges in terms of security of supply, to which political answers must also be found.

According to Tichys Einblick, a number of industries have been on the receiving end of “peak smoothing” efforts for some time now. Cold storage facilities and aluminum smelters have to put up with being disconnected from their power supplies for limited periods. However, the publication noted: “It’s a dangerous game [for aluminum smelters] because after three hours, the molten metal has solidified and the factory is ruined.”

Berlin On The Brink! Winter Blackouts Loom As Coal Plants Run At 100% Capacity, Struggle To Keep Lights On In
By P Gosselin on 28. January 2021
https://notrickszone.com/2021/01/28/berlin-on-the-brink-blackouts-loom-as-coal-plants-running-at-100-capacity-struggle-to-keep-lights-on-in/

According to Prof. Schwarz:

“With this supply of wind and photovoltaic energy, it’s between 0 and 2 or 3 percent – that is de facto zero. You can see it in many diagrams that we have days, weeks, in the year where we have neither wind nor PV. Especially this time for example – there is no wind and PV, and there are often times when the wind is very miniscule.  These are things, I must say, that have been physically established and known for centuries, and we’ve simply totally neglected this during the green energies discussion.”
-------------