China Watch 42, ASEAN leaders' view of China and US

A good column today by a friend, Dr. Mangahas of SWS,

Amen to this, good points, Mahar. The CCP and Xi Jinping are seen as untrustworthy by ASEAN people. 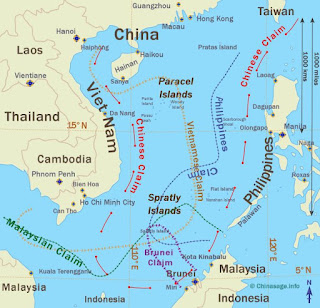 (This map from chinasage)
So Trump is correct in pushing back hard on CCP/Xi on many fronts.

Any backtracking by the Biden administration on any of these four impt policies will be seen as Biden appeasement of CN communista.

Meanwhile, this paper by a Fellow at the Brookings Institution, is shrewd.

A Superpower, Like It or Not
Why Americans Must Accept Their Global Role
By Robert Kagan  March/April 2021
https://www.foreignaffairs.com/articles/united-states/2021-02-16/superpower-it-or-not.

"The Chinese believe that the United States is in decline, and so do many Americans. The danger is that as Beijing ramps up efforts to fulfill what it has taken to calling “the Chinese dream,” Americans will start to panic. It is in times like this that miscalculations are made."

In his concluding paragraph, he wrote,

"...the purpose of NATO and other alliances is to defend not against direct threats to U.S. interests but against a breakdown of the order that best serves those interests."

Wrong. The raison d 'etre of NATO is political and military defense of members vs that big power in Europe that's not a member. Which is USSR, now Russia. NATO was formed in 1949, after WW2 and when there was aggressive East Germany vs West Germany, when Poland, Estonia, other East Europe were not friendly to West Europe.

That's why I said that Kagan is shrewd. He indirectly praises CN and blames the US. He indirectly advances the Dems and US arms industry agenda in supporting US endless spending in NATO, never mind US taxpayers.
-------------

Posted by Bienvenido Oplas Jr at 11:33 AM