* This is my article yesterday in TV5's news portal,
http://www.interaksyon.com/business/47182/fat-free-economics--anti-capitalism-fanaticism-and-the-poor
---------- 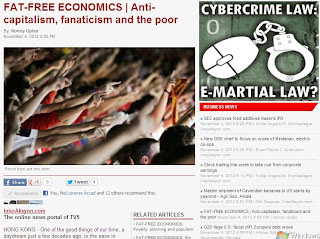 HONG KONG - One of the good things of our time, a daydream just a few decades ago, is the ease in communication among people from different countries and continents, the ease in getting information in just minutes without leaving our house or office. Online news portals like Interaksyon.com is one such product.

These are all products of entrepreneurship, innovation, risk taking and capitalism. The profit motive under this system has pushed and inspired so many individuals and private enterprises to keep innovating and improving on previous products and models, which benefit us, consumers. And yet we hear plenty of sentiments and proposals to abandon capitalism, the profit motive and enterprise competition, to be replaced by socialism or state ownership of various means of production, or other hybrid of such system. Or at least to have plenty of government regulation, taxation and prohibition.

"The characteristic feature of modern capitalism is mass production of goods destined for consumption by the masses. The result is a tendency towards a continuous improvement in the average standard of living, a progressing enrichment of the many. Capitalism deproletarianizes the 'common man' and elevates him to the rank of a 'bourgeois'.

"On the market of a capitalistic society the common man is the sovereign consumer whose buying or abstention from buying ultimately determines what should be produced and in what quantity and quality. Those shops and plants which cater exclusively or predominantly to the wealthier citizens’ demand for re-fined luxuries play merely a subordinate role in the economic setting of the market economy. They never attain the size of big business. Big business always serves—directly or indirectly—the masses."

Mises’ book is among the e-books and long articles that we read before coming to this famous Freeport economy for the “Populism, Reading Club Salon” organized by the Lion Rock Institute, a free market think tank in this city.

There were two sessions yesterday, one on “Anti-capitalist mentality and the religion of the all-powerful government”, and on “Fanaticism and mass movement.” Mises’ book, along with Friedrich von Hayek’s The Road to Serfdom (1944) and Robert Nozick’s Why Do Intellectuals Oppose Capitalism? (1998) were the reading materials in session one. Two books were the background materials for session two, Eric Hoffer’s The True Believer (1951) and Mao Zedong’s Little Red Book.

"A man is likely to mind his own business when it is worth minding. When it is not, he takes his mind off his own meaningless affairs by minding other people’s business.

"This minding of other people’s business expresses itself in gossip, snooping and meddling, and also in feverish interest in communal, national and racial affairs. In running away from ourselves we either fall on our neighbor’s shoulder or fly at his throat."

When I was an undergraduate student at UP Diliman in the 1980s when Marcos was still in power, believing in the writings of Karl Marx, Vladimir Lenin and Mao Tse Tung was rather common among many activists. Mao for instance, wrote or quoted in his “Little Red Book” these things:

"Classes struggle, some classes triumph, others are eliminated. Such is history; such is the history of civilization for thousand years. To interpret history from this viewpoint is historical materialism.

"In the final analysis, national struggle is a matter of class struggle. Among the whites in the United States, it is only the reactionary ruling circles that oppress the black people. They can in no way represent the workers, farmers, revolutionary intellectuals, and other enlightened persons who comprise the overwhelming majority of the white people."

Having abandoned Marxism and belief in socialism nearly two decades ago, I realized how hateful and inciting to violence those words were.

The discussion yesterday was lively. There were several explanations why there is high anti-capitalist or anti-free market sentiment among people in various societies. Like the itch to regulate and control other people, high belief in forced collectivism as against allowing more individual freedom and diversity, the social engineering mindset, the desire to have forced equality in society, and the corresponding expansion in the legislation and institutionalization of various “rights” and entitlements.

There is a difference between equality of social and economic outcome, and equality before the law or simply the rule of law. The former calls for equality among people regardless of their industriousness or laziness while the latter is to have the same set of laws apply equally to unequal people. Thus, the law on stealing should apply equally to all, from the rich to the poor.

Today’s sessions will be on “The New Left” and “Propaganda” and we are done. This small group round table discussion will be followed by a big conference on Tuesday and Wednesday also on populism and welfarism, to be sponsored by the Friedrich Naumann Foundation for Freedom in another hotel in this city.

The desire for more populist and entitlement policies has corrupted individual values. Some people would rather be professional street demonstrators and political rabble-rousers than become efficient entrepreneurs who create various goods and services that people need. In addition, politicians tend to pander to the noise of this group of people and hence, public spending tends to rise much faster than public revenues, resulting in ever-rising public debt that is creating havoc and discomfort in several rich and welfarist economies. 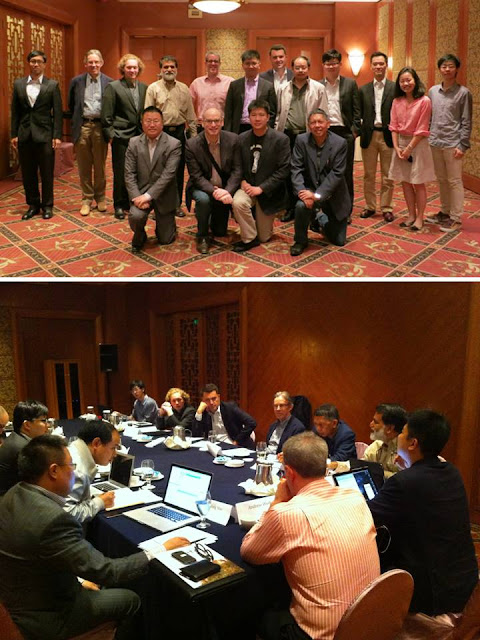