Busiiness 360 1: Nepal and the Philippines

My friend in Kathmandu, Nepal, Charu Chadha, is into publication. I have met her first in Phuket, Thailand, in 2005, during the Atlas colloquium on Friedrich Hayek's book, "The Constitution of Liberty". 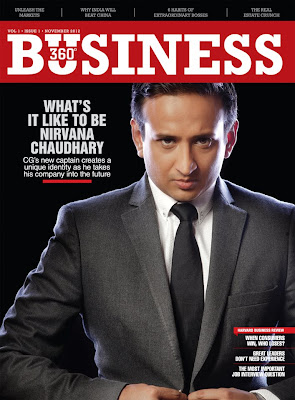 Charu recently rolled out the first issue of her new mgazine, Business 360. The magazine hit the newstand last November 01 in Kathmandu and other cities of Nepal. In its facebook page, it says,

"Business 360 is a magazine that promises to deliver on quality business news content, profiles of entrepreneurs and leaders, features on issues that matter, articles that assess and analyze policy and delivery mechanisms in the world of trade and commerce."

Charu invited me to be one of the guest columnists in her new paper, a request that I quickly accepted. I would write once a month only. So in the first issue, my first article also appeared.

Below is my article. A friend and batchmate from UPSE, Leo Riingen, who is in Kathmandu for a vacation, saw the magazine. He scanned a copy of my article, below. Thanks Leo!
--------- 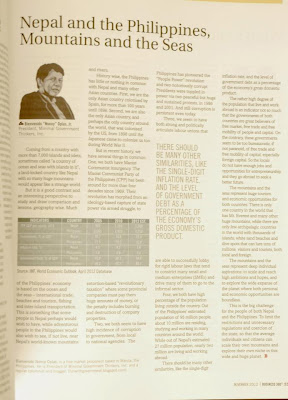 Nepal and the Philippines, Mountains and the Seas

Manila – Coming from a country with more than 7,000 islands and islets, sometimes called “a country of ocean and seas with islands in it”, a land-locked country like Nepal with so many huge mountains would appear like a strange world.

But It is a good contrast and an interesting perspective to study and draw comparison and lessons, geography wise. Much of the Philippines’ economy is based on the ocean and the seas – international trade, beaches and tourism, fishing and inter-island transportation. This is something that some people in Nepal  perhaps would wish to have, while adventurous people in the Philippines would also wish to see if not live near Nepal’s world-known mountains and rivers.

But in recent history, we have several things in common. One, we both have Maoist Communist insurgency. The Maoist Communist Party of the Philippines (CPP) has been around for more than four decades since 1969. Their revolution has morphed from an ideology-based capture of state power via armed struggle, to extortion-based “revolutionary taxation” where some provincial companies must pay them huge amount of money, or the penalty includes burning and destruction of company properties.

Two, we both seem to have high incidence of corruption in government, from local to national agencies.  The Philippines has pioneered the “People Power” revolution and two notoriously corrupt Presidents were toppled in power via two peaceful but  huge and sustained protests, in 1986 and 2001. And still corruption is persistent until today.

Three, we seem to have both strong and politically articulate labor unions that are able to successfully lobby for rigid labor laws that tend to constrict many small and medium enterprises (SMEs) and drive many of them to go to the informal sector.

There should be many other similarities, like the single-digit inflation rate, and the level of government debt as a percentage of the economy’s gross domestic product.

The rather high degree of the population that live and work abroad is an indicator not so much that the governments of both countries are great believers of free market, free trade and free mobility of people and capital. On the contrary, these governments seem to be too bureaucratic if not paranoid, of free trade and free mobility of capital, especially foreign capital. So the locals do not have enough jobs and opportunities for entrepreneurship, so they went abroad to seek a better future.

The mountains and the seas represent huge tourism and economic opportunities for both countries. There is only one country in the world that has Mt. Everest and many other huge mountains, while there are only few archipelagic countries in the world with thousands of islands, white sand beaches and dive spots that can lure tens of millions  visitors and tourists, both local and foreign.

The mountains and the seas represent deep individual aspirations: to scale and reach high ambitions and hopes, and to explore the wide expanse of the planet where both personal and economic opportunities are boundless.

This is the big challenge for the people of both Nepal and the Philippines. To limit the restrictions and unnecessary regulations and coercion of the state, so that the average individuals and citizens can scale their own mountains and explore their own niche in this wide and huge planet.
Posted by Bienvenido Oplas Jr at 2:08 PM