* This is my article yesterday in TV5's news portal,
http://www.interaksyon.com/business/47956/fat-free-economics-in-demonizing-bpos-obama-barking-up-wrong-tree
-------- 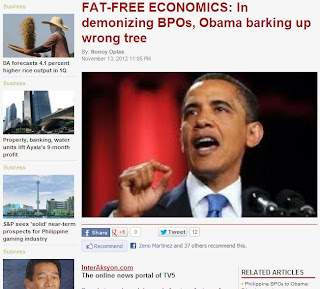 If market supply and demand of various factors of production – labor, capital, technology, etc. – are left to seek their specific and unique values worldwide, there will be factor price equalization (FPE) across countries and across sectors and sub-sectors through time. Globalization and international mobility of such factors of production would make this possible.

This is what happened to the business process outsourcing (BPO) and many other sectors around the world. Where wages and other labor costs, where office lease and rental, as well as cost of capital are much higher in one country than in others, there will be a tendency for businesses to move to countries with lower costs of production. The chart below is a simple conceptual illustration of changes in wages if global mobility of labor and capital is not hindered.

Recently, the re-election of US President Barack Obama has rekindled the old fear here of bringing back to the US those BPO jobs. The Obama administration is planning to entice American companies operating here and in other countries to head back to US soil by giving them a 20-percent tax deduction on costs associated with closing outsourced operations and bringing back jobs to the US.

There is reason for this apprehension by the Philippine-based BPO companies. Last year, estimated direct employment of the BPO sector here was 640,000+ while indirect employment was estimated at 1.3 million. Some $11 billion revenues were also made in this sector last year.

These are huge numbers. Compare those numbers to nearly $20 billion in remittances by the OFWs, who are working outside the country. BPO employment is considered good because people are working here in the country, not far away from their families. This is not to say of course that working abroad - as what the OFWs do - is bad. 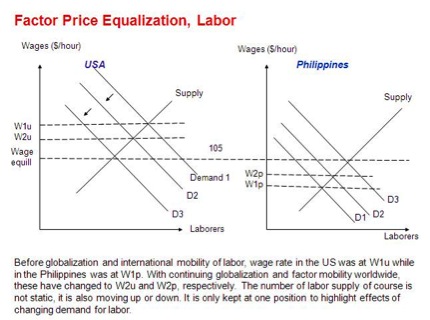 The US is the largest market of Philippine-based BPO companies, and the latter have already set an ambitious goal of generating some $25 billion in revenues in 2016.

Obama should consider at least three ways by which more American BPO companies in the Philippines and other countries can help the US economy.

One, an American company that has outsourced its BPO needs abroad at a lower cost will make that company become more competitive and profitable. It may expand its operations within the US and hire more workers there.
Two, a rise in average wages in developing countries like the Philippines as a result of new jobs created by US multinational companies here would mean that more Filipinos will have higher purchasing power to buy more American products and services, or visit the US as tourists.

And three, these economic activities involving American companies and businessmen would mean more tax revenues for the US government.

Thus, the Obama administration should focus its efforts and energy on cutting its huge public debt that results in large interest payments. It should also consider bringing down some taxes and regulatory fees there that drive many US companies to operate and do business abroad.

On the part of the Philippine government, it should offer more incentives to multinational companies to set up businesses here. It should also encourage local entrepreneurs and business professionals to stay and create jobs here. This incentive package would include a reduction in corporate taxes and fees, and a drastic reduction in corruption and red tape.

Globalization means sharing of social and economic opportunities among different people in different countries. Governments should limit or reduce their intervention in business decisions, avoid populist quick fixes. Allow people and companies to do what they want so long as they do not physically harm other people and private enterprises.

Wealth is created in the private sector. Laws and regulations are created in the public sector. It is important that laws created by governments do not restrict the wealth-creating capacity by people and private enterprises.
----------