This is my article last Friday in the online magazine with the original title, "Tolerance, Co-existence and the Middle East Conflict", http://thelobbyist.biz/index.php/perspectives/less-government/item/125-tolerance-co-existence-and-the-middle-east-conflict
-------- 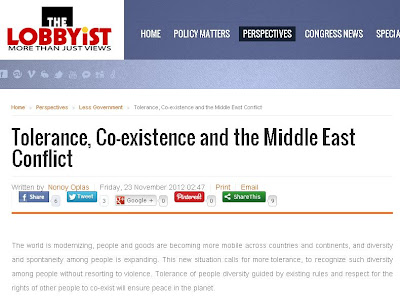 The world is modernizing, people and goods are becoming more mobile across countries and continents, and diversity and spontaneity among people is expanding. This new situation calls for more tolerance, to recognize such diversity among people without resorting to violence. Tolerance of people diversity guided by existing rules and respect for the rights of other people to co-exist will ensure peace in the planet.


This is not happening in the Middle East as shown by the recent eight-days war between the Palestine in Gaza and Israel. A truce became effective on November 22 brokered by the governments of Egypt and the US. But this seems to be another temporary respite from another war.

The main problem in the Middle East conflict is the lack of respect or recognition for peaceful co-existence between the Palestine and Israel. While the latter recognizes the former’s right of existence, the latter, especially the Hamas militants, does not show the same attitude.

After the six-days war in 1967 where many Arab nations simultaneously attacked Israel but they were all defeated and they all retreated, Israel could have abolished Gaza from the map and allowed only the West Bank as the homeland for the Palestinians, but they did not. In contrast, Hamas wants nothing but the total abolition of Israel from the map and the whole of Israel will become a homeland for the Palestinians. Peaceful co-existence is a strange or even a non-acceptable word for Hamas and other Arab militants.

As long as Hamas and other Arab militants want the total abolition of Israel, war in that area will be endless as Israel will defend itself and its people. And since Israel has the economic and military superiority over the Palestinians, then in any war between the two, damage and casualty will always be larger on the Palestine side.

When Israel conducted those aerial attacks and bombings, many Palestinian civilians, most likely family members and neighbors of Hamas militants, were injured or killed. To avoid or minimize high civilian casualties, Hamas militants should have their own military installations away from houses and schools. They can fire rockets from there, not from houses, schools or other civilian structures.

A quick look at the Middle East map would show that Syria and Jordan, next to the West Bank, have huge lands. Can they donate a portion of their lands for their brother Palestinians? 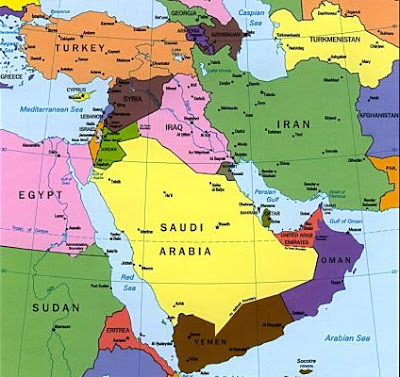 Egypt too has a huge land area, can they also donate some land to their brother Palestinians in Gaza? Why insist on the abolition of Israel from the map? Israel land area is actually very small compared to those of Jordan, Saudi, Iraq, Egypt, Syria and Iran.

Israel must also temper the fundamentalists among its citizens like those who expand Jewish settlements in contested territories or those considered neutral grounds with the West Bank.

A friend from Pakistan, Zubair Malik, argued that “Victory has many fathers, defeat has none! I wish you should have seen the plight of Palestinian before commenting. Houses destroyed, innocent women and children killed. Have Fear of God and this applies to both Israel and Palestinians . Every Human Life irrespective of color or creed has a right to peaceful existence.”

I told Zubair that like him and many other people around the world, I also wish to see PEACE anywhere in the world. No more rockets to land anywhere, no more jet fighters dropping bombs, nor tanks and ground fighting. I even wish that the Armed Forces of the Philippines (AFP) be abolished someday along with the evaporation of armed revolution by the communist New People’s Army (NPA). We need to have more tolerance, more respect for human rights, more respect for the right to existence of other people other than our color, religion, or cultural belief, and settle disputes in non-violent means.

The old formula of "banish Israel from the planet" is formulation of deep intolerance, of deep hatred and non-recognition of diversity among people, So long as such intolerance and desire for physical annihilation of another group of people persists, the war in that region will be endless. And when there is war, there is high casualty of civilians, their houses, schools, other structures.

I stumbled upon this document, the Hamas Charter.

"The time will not come until Muslims will fight the Jews (and kill them); until the Jews hide behind rocks and trees, which will cry: O Muslim! there is a Jew hiding behind me, come on and kill him!" -- Article Seven, Hamas Charter (1988) .

Why is there such explicit, categorical exhortation to hatred and murder? Why this deep intolerance?

The Palestinian Authority in the West Bank seems to be more tolerant compared to Hamas in Gaza. From the Hamas Charter of 1988, there was heavy reference to Allah, their literature can mislead non-Muslim readers into believing that the explicit hatred and categorical violence that they espouse is consistent with the Muslim faith, which is not true.

Now that a truce and ceasefire is in effect, we can sigh with relief that the rockets and air attacks on both sides have stopped. Let us hope that a lasting peace can prevail in that region, whether it will take a thousand years or more. Respect for diversity among people is our key to building a prosperous and peaceful planet.
-----------