* This is my article yesterday in the online magazine,
http://thelobbyist.biz/index.php/perspectives/less-government/item/122-welfare-populism-and-poverty
------- State-mandated welfare populism or universal welfare, is creating more dependency and mendicancy rather than independence and self reliance. It is encouraging more corruption rather than curing it, expanding the spend-tax-borrow policy, bloating the public debt and the economic uncertainty that comes with it. Therefore, politicians and the public should avoid welfarism trap and steer government to focus on promulgating the rule of law, protecting property rights, making social and economic rules apply equally to all and not making favoritism and cronyism.

This is the main message in the two-days Economic Freedom Network (EFN) Asia 2012 conference last November 6-7, 2012, here at Crowne Plaza East Kowloon, Hong Kong. The event that attracted more than a hundred international and local participants was sponsored by the Friedrich Naumann Foundation for Freedom (FNF) and co-sponsored by the Lion Rock Institute (LRI), Hong Kong’s first and only free market institute.
Among the speakers in the two-days conference were Wolf Dieter Zumpfort, Deputy Chairman of the FNF Board of Directors in Germany;  Abhisit Vejjajiva, former Thai Prime Minister, Rainer Adam, Regional Director of the FNF Southeast and East Asia, Bill Stacey, Chairman of LRI, and John Tsang, Finance Secretary of Hong Kong.
The various speakers have reiterated the importance of setting markets free – rich and poor, men and women, young and old, to have access to various employers and consumers of their skills and talent, products and services, in a competitive and non-monopolistic or non-oligopolistic environment. The role of government is to protect the property rights of the people, that the fruits of their hard work and efficiency, are protected and not forcibly taken away from them by bullies and cheats. This necessitates upholding the rule of law, that regulatons apply to all, exempts no one and no one can grant exemption from the limitations made by the law.
Thus, the law against killing, stealing, kidnapping, land grabbing, extortion and other criminal activities should apply and be strictly implemented. This equality before the law will act as the main incentive for people to become more industrious, responsible and self reliant.
Forcing equality in society via populist and welfarist policies – like high food subsidy, fuel subsidy, housing subsidy, healthcare subsidy, cash transfers – would tend to encourage dependency and mendicancy. Forcing equality of social outcome among the people regardless of their work and efficiency or lack of them, will distort markets, wreak havoc on the fiscal condition of governments, as what is happening now in many welfare states in Europe like Greece, Spain, Portugal and Italy.
Even in Hong Kong, according to local speakers, the government is treading slowly on more welfarist policies that were absent when this free trade economy was developing and has attained a highly developed economic status.

The European speakers in the conference also recognized that Hong Kong's generally free market and globalized economy coupled with the rule of law, is mainly responsible for its economic prosperity while Germany and many European economies are struggling with welfarism trap, massive unemployment, and the need to cut the expensive, huge debt generator welfare programs to help stabilize their economy.

Welfarism is being introduced more liberally in many Asian governments and economies recently. In Thailand for instance, they have rice subsidy, free computer tablets for first graders, and subsidy for first time car buyers. The latter alone cost the government $1 billion and the traffic has worsened further.
In Indonesia, fuel subsidy has further bloated the public debt. In China, there are calls for school free lunch, free school bus.
In S. Korea, there are free child care and universal school meal policy. If these and other new welfare programs are adopted, public spending will rise by around $520 billion more, which will need either new taxes and/or more borrowings. Existing welfare programs alone is projected to contribute to government spending of 45 percent of GDP and the public debt is projected to reach 216 percent of GDP.
In the Philippines, there are various welfare programs supposedly to help “fight poverty”. These include education and books for the poor, healthcare and medicines for the poor, housing and relocation for the poor, credit and tractors for the poor, and many of these do not seem to work as high poverty still persists, so they invented new welfare programs like cash transfer for the poor, and soon, pills and condoms for the poor.
In his keynote address, HK’s Finance Secretary John Tsang said that they are conscious of observing fiscal prudence for three reasons: it is in their constitution, they are aware of the huge public debt problem of many welfare economies, and it is part of their value system of not spending more than one’s income.
Wall Street Journal editor for Asia business, Joseph Sternberg, observed that Mr. Tsang has several new taxes on residential real estate transactions, like a 15 percent tax on foreigners real estate buyers, an increase in “special stamp duty”, and the possibility of the HK government imposing a capital gains tax on property soon.
All new taxes or hike in the rates of existing taxes are meant to expand government revenue to finance in part new welfare spending or expand coverage of existing welfare programs. Politicians, legislators and other policymakers cannot bind themselves and their successors. The itch to intervene, to subsidize and over-spend, is there, resulting in distortion in many sectors of the economy, high public indebtedness that results in high interest payment and siphons resources away from otherwise productive spending.
Rule of law is undermined when government mixes with businesses. Cronyism and nepotism is not far off when government becomes the regulator and industry player at the same time, even in the guise of protecting the poor from “market manipulation by private enterprises” demagoguery.
There were many other important points discussed during the conference. As the Philippine elections is coming closer, just six months away, reminding both the politicians and the voters that welfare populism is a costly policy that can create more dependency rather than independence, is an important task for concerned individuals and civil society leaders.
-----------

Meanwhile, here are  more photos during the conference.
Below, the two guys whom I would consider as the "pillars" of the EFN Asia conference, Dr. Rainer Adam (left) and Dr. Wolf Dieter Zumpfort (right). Without their commitment to hold an annual EFN Asia conference, the network could have been more loose and have no regular regional and international networking.

Then my two photos from Xingyuan Feng's camera. Xingyuan has been a friend since 2004 and I see him every year in various regional and international conferences. Another friend in the picture is Shoulong Mao, another Chinese academic and free marketer, President of the Cathay Institute for Public Affairs (CIPA). 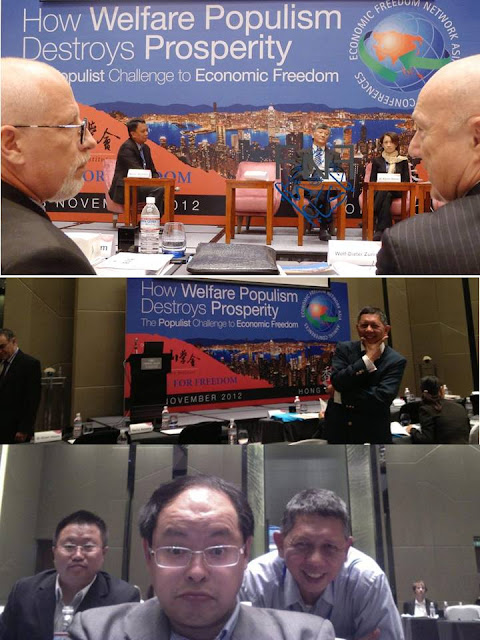 With Barun Mitra of Liberty Institute, India, and Janice Fung, a very efficient intern at Lion Rock Institute (LRI). Below, Andrew Work and Andrew Shuen, two of the co-founders of LRI in 2004. Very articulate and wacky guys. 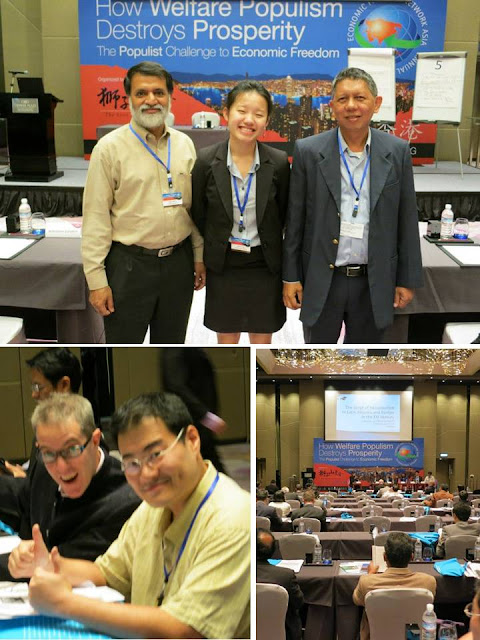 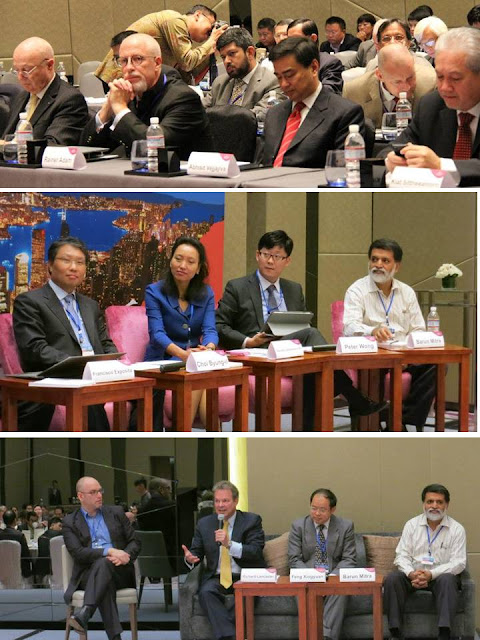