Yesterday afternoon, I attended a lecture by Martin Jacques at Intercontinental Hotel, Makati. The event was jointly sponsored by the Pilipinas 2020 and the Center for Philippine Futuristics Studies. I had the chance to have a photo with Martin during the break. His book is available at National Bookstore. 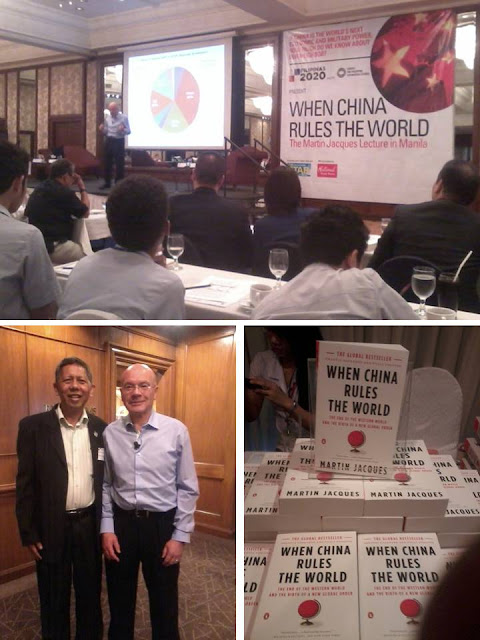 Nice, long lecture, though I did not stay for the reactors' time and open forum. Food was great and a plenty.

Even before going to the lecture, I do not believe that China or any country or government or even the UN can rule the world. The world is too huge and people are too many and diverse to be ruled and regulated, monotonized by any country or government. China can be the #1 economic power in the world in 2030 or 2020 at the earliest, but it does not mean that it can economically rule the world. But I like Martin's presentation, also his argument that unlike previous colonial powers Europe, and expansionist US, China is inward looking, never conquered any country (except Tibet?) as it believed that the Middle Kingdom is a superior land, huge and powerful by itself.

Martin showed certain sectors in comparing China and the US economically, not just the macro picture like GDP size. For instance, China has overtook the US in steel consumption (since 1999), number of mobile phones (since 2001), exports (2007), fixed investments, manufacturing output, energy consumption, number of car sales, patents granted to citizens (since 2009). 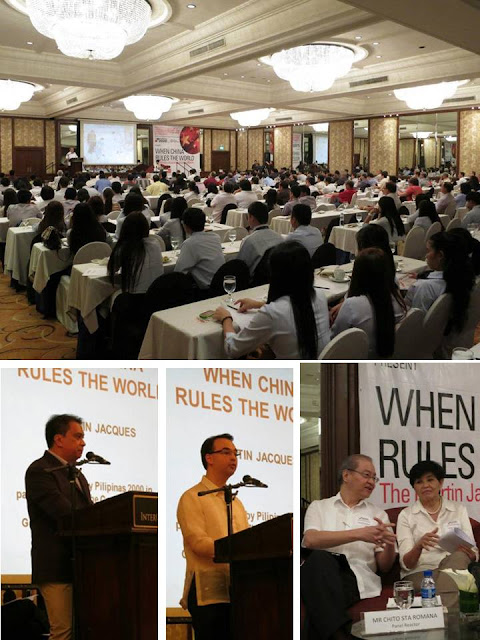 The ballroom was full. I thanked Jose Bayani "JB" Baylon, convenor of Pilipinas 2020, for inviting me to the event. JB was my classmate in one subject in Political Science in my undergrad years in UP Diliman in the 80s. He was the program MC. The Welcome Remarks was given by Sen. Alan Peter Cayetano, a member of Pilipinas 2020. Reactors were Mr. Chito Sta. Romana and Dr. Clarita Carlos. These photos I got from JB's facebook timeline.

Martin also said that in terms of foreign aid and lending to the developing world, China Development Bank + China Export and Import Bank gave loans in 2009-2010 at $110B, vs. the WB's lending of $100.3 B over the same period. But more than foreign aid, it is economic interdependence, trade and investment, among countries and blocs of countries (like the ASEAN) that greatly characterizes today's world economy.
Personally, I believe that the western economy is slowly imploding due to their high public debt and very costly welfare system. The developing world led by China, India, Brazil will dominate the world economy in a decade or two, thanks to their huge population. More people, more entrepreneurs, more workers, more consumers.

He also said that China's GDP size may soon be larger than that of the US, but per capita income, it is small, just one-fifth that of the US.

One thing I like in Martin's lecture is that it was rather heavy on economics and history, low on military conflict. He does not believe that China will go to war with the Philippines over those small islands in the Western side of PH. Rightly so. I really doubt that the China communist government will court displeasing any or all the ASEAN member countries -- now probably 500million people and consumers, bigger than the US, bigger than EU, and next only to India. The probability of a China-ASEAN free trade area (FTA) I think, is probably 20x higher than the probability of a China-some ASEAN military confrontation over those few islands.
-----------