Diseases evolve. These are living micro-organisms -- bacteria, virus, etc. -- that feed on certain organs of the human body. They are part of human and natural evolution, sadly. That is why treatment and cure of old and re-emerging diseases must evolve too, endlessly. That is why drug innovation, medical science and diagnostics innovation, must continue to evolve and modernize.

Below are some stories of drug-resistant tuberculosis, as well as challenges to deal with malaria, an old disease that continues to kill hundreds of thousands of people every year until now. Estimated global death from malaria in 2010 was twice that of WHO estimates of 655,000 people. A BMGF funded study published in The Lancet showed that for the same year, estimated death from malaria was 1.24 million people, mostly children, and mostly in Africa. 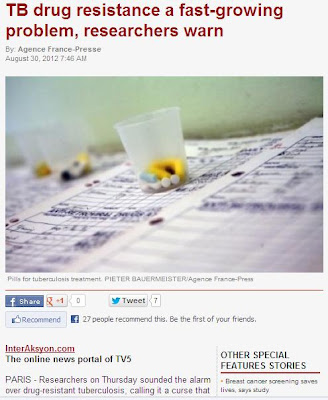 PARIS - Researchers on Thursday sounded the alarm over drug-resistant tuberculosis, calling it a curse that was swiftly becoming more difficult and costly to treat.

In eight countries they studied, 43.7 percent of TB patients did not respond to at least one second-line TB drug, a strategy used when the most powerful first-line drugs fail.

"Most international recommendations for TB control have been developed for MDR (multidrug-resistant) TB prevalence of up to around five percent. Yet now we face prevalence up to 10 times higher in some places," Sven Hoffner of the Swedish Institute for Communicable Disease Control wrote in a comment carried by The Lancet.

The study also found a 6.7 percent rate for an even more worrying form of resistance called XDR -- for extensively drug-resistant -- TB. It means a patient who does not respond to any two second-line drugs.

An airborne disease of the lungs, tuberculosis is usually treatable with a six-month course of antibiotics.

But if patients do not take their medicines as prescribed, the bacteria that causes TB can develop resistance to the drugs. In rare cases, people can also be infected with already resistant strains.

XDR TB requires about two years of treatment with even more expensive drugs that often cause side-effects and offer no guarantee of a cure.

According to the World Health Organization (WHO), 8.8 million people fell ill with TB in 2010 and 1.4 million died. Co-infection with the disease causes about a quarter of all deaths among people with HIV.

"So far, XDR TB has been reported in 77 countries worldwide, but exact prevalence remains unclear," study author Tracy Dalton of the US Centers for Disease Control and Prevention (CDC) said.

XDR TB prevalence in the countries measured ranged from 0.8 percent in the Philippines to 11.3 percent in Russia and 15.2 percent in South Korea.

Further research is needed "since the true scale of the burden of MDR and XDR tuberculosis might be underestimated and seems to be rapidly increasing," said Hoffner.
--------

By HANNAH OSBORNE: Subscribe to Hannah's RSS feed
October 25, 2012 4:53 PM GMT
A potential treatment discovered by disease scientists could eradicate malaria, which kills up to three million people every year.
Researchers at Imperial College London, along with scientists at Institut Pasteur and CNRS in France, have identified a way to rapidly kill the blood-borne Plasmodium parasites that cause the disease.
The Plasmodium quickly develop resistance to current treatments available for malaria. The new potential treatment interferes with an important stage in the parasites' development and kills them.
The researchers found two chemical compounds that are able to kill the parasite during its life cycle, while it inhabits the blood-stream. The molecules were also able to kill off strains of Plasmodium that had become drug resistant.
It was found that the treatment kills 90 per cent of the parasites in just three hours. It killed all the parasites in the laboratory samples of infected human blood cells within 12 hours.


Malaria predominately affects vulnerable people, such as pregnant women and children under five, in tropical regions of Africa, Asia and Latin America.
Speaking about the possible eradication of the disease, lead researcher, Dr Matthew Fuchter, from Imperial College London, said: "Plasmodium falciparum causes 90 per cent of malaria deaths, and its ability to resist current therapies is spreading dramatically.
"Whilst many new drugs are in development, a significant proportion are minor alterations, working in the same way as current ones and therefore may only be effective in the short term. We believe we may have identified the parasite's 'Achilles' Heel', using a molecule that disrupts many vital processes for its survival and development.
"One particularly exciting aspect of this discovery is this new molecule's ability to rapidly kill off all traces of the parasite, acting at least as fast as the best currently available antimalarial drug."
Oxfam recently said that that the Affordable Medicines Facility for malaria (AMFm) scheme, currently being used to treat people with malaria, is not working and could be endangering lives.
Under the scheme, shopkeepers can sell malaria drugs. However, sellers are not trained to diagnose malaria, so may well be providing these drugs to people who do not have the disease.
Dr Mohga Kamal Yanni, Oxfam's senior health policy advisor, said: "It is dangerous to put the lives of sick children in the hands of a shopkeeper with no medical training and to pursue a scheme that doesn't help those people who need it the most.
"There is no cheap option or short cut to combat malaria. The AMFm is a dangerous distraction from genuine solutions like investing in community health workers, who have slashed the number of malarial deaths in countries such as Zambia and Ethiopia."
The researchers now plan to refine the molecules and improve their effectiveness. It is hoped they will be able to develop a cure for malaria within a decade.
---------

The good news is that death from malaria worldwide is generally declining. The bad news is that more than 1 million people still die from it each year when this disease can be prevented with proper treatment.

And this puts question to WHO and many governments' alarmism about NCDs: malaria, dengue, AIDS, TB and other infectious, communicable diseases, remain a serious threat to many poor people. Why do the WHO and national governments put too much emphasis on NCDs, especially on lifestyle-related diseases like over-drinking, over-eating, over-sitting, over-smoking?

NCDs for children like childhood cancer is understandable, governments should help children patients. But alarmism over high death from cardiovascual, cerebrovascular, respiratory tract infections,other adult NCDs should not be much a concern for governments. What those governments should do, is to encourage people who tend to abuse their body, to buy private health insurance. Governments should not get my money, your money, so it can subsidize the healthcare of those who are less careful, less responsible, about their body.

Meanwhile, there was a debate between The Global Fund to Fight AIDS, TB and Malaria (TGF) vs. Oxfam, over a new scheme piloted by TGF, the Affordable Medicines Facility for Malaria (AMFM), implemented mostly in Africa.

TGF says the program was successful, has saved many lives and has brought down the price of anti-malaria treatment to only 1/20 of its previous cost.

Oxfam says otherwise, that many vulnerable groups and people are not saved from malaria, that the program must be stopped, that private sector participation must be stopped.

DFID, funder of MeTA, also pitched in money for the AMFM, along with Oxfam and the Bill and Melinda Gates Foundation (BMGF).  See the news here,

I do not know the details of this debate but offhand, I think Oxfam is wrong here. The BMGF is purely, 100 percent, private sector money. It is donating about $4B per year to different programs like TGF, medicine discovery and R&D, etc. -- at zero govt politics, zero taxes, zero politicians involved. So casting deep suspicion of private sector involvement is wrong.
------------