Volcanic areas are among the most beautiful places to see in the country — Mayon, Pinatubo lake, Bulusan lake, Taal lake, etc. They are beautiful when the volcanoes are at rest, but when they rumble and erupt, they are among the worst places in the planet to be due to the many dangers they pose. Among the most active, most violent volcanoes in the Philippines and their explosions since 1600 are listed in Table 1. 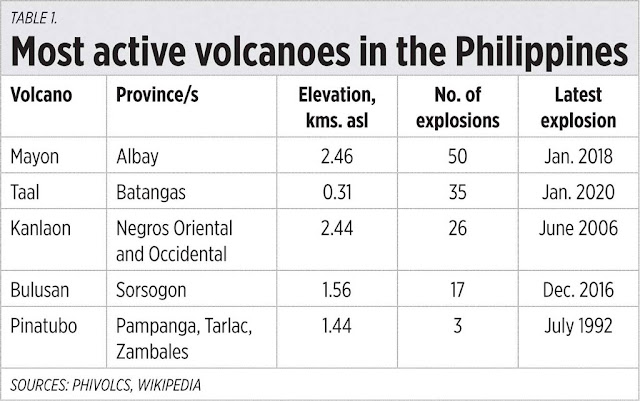 Residents and business locators around Taal volcano and lake in Batangas, Cavite, Laguna, and Quezon are suffering from the heavy ashfall. This is a big setback to business and tourism, but it is Nature taking its regular geological cycle of volcanic calm and eruption over decades or centuries.

Negros island has a huge, tall, active volcano — Kanlaon — that inspires plenty of tourism-related businesses around it. There are many waterfalls, big rivers, hot springs, then hills and flatlands below it.

I am from Cadiz City, Negros Occidental. We are at the northern tip of Negros island and somewhat far from Kanlaon. It has the third biggest land area in Negros island, which is composed of two provinces. In terms of population though, cities in Cebu island are the biggest (see Table 2). 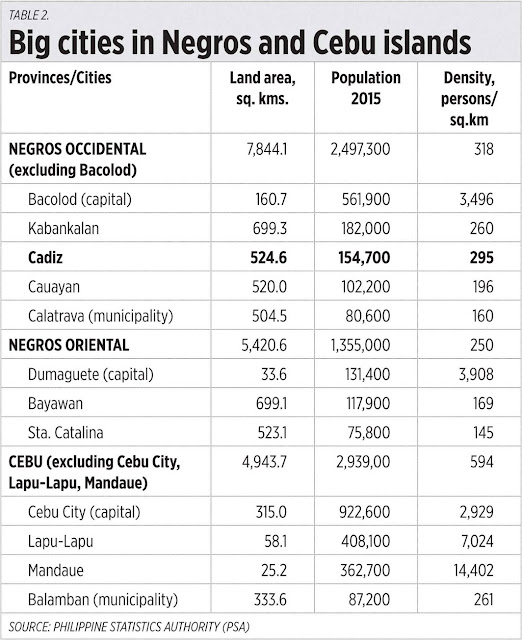 Last December, I spoke with Cadiz City Mayor Salvador Escalante, Jr. in the new City Hall building about the economic environment in the city. He was joined by City Engineer Jose Lauro Napud and City Investment Officer Lyn Regodos. I was surprised to hear of the many private investments, existing and planned, for the city. For instance, the malls that are already there are Citimall, Puregold, and SM Hypermart. Coming soon is Gaisano, and Robinsons has expressed an interest to come in. Some manufacturing and processing plants are being planned because of Cadiz’ huge land area, long coast, and access to the island’s nearly 5 million people and consumers.

Cadiz’ main tourism attraction is Lakawon island resort, with its modern facilities and its white sand beach which is considered the “little Boracay” of Negros.

Water should not be a problem because the city has many rivers. The problem though would be power as Negros island relies heavily on old and ageing geothermal power plants. There are many solar farms but solar is intermittent, unreliable, and non-dispatchable on demand. Negros does not have a single coal plant and is becoming more dependent on power “imports” from Iloilo and Cebu coal plants. I wish that my province mates will soon realize that the real “dirty energy” are candles and gensets running on diesel when there are frequent blackouts — not coal.

I also visited Tapaz, Capiz last December, and spoke with Mayor Roberto Palomar. I was introduced to him by my fellow Cadiznon Niel Defensor who works as a consultant to Mayor Palomar. I was surprised to know that Tapaz has the biggest land area in Panay island (composed of four provinces), and its population density is among the lowest in the island (see Table 3). 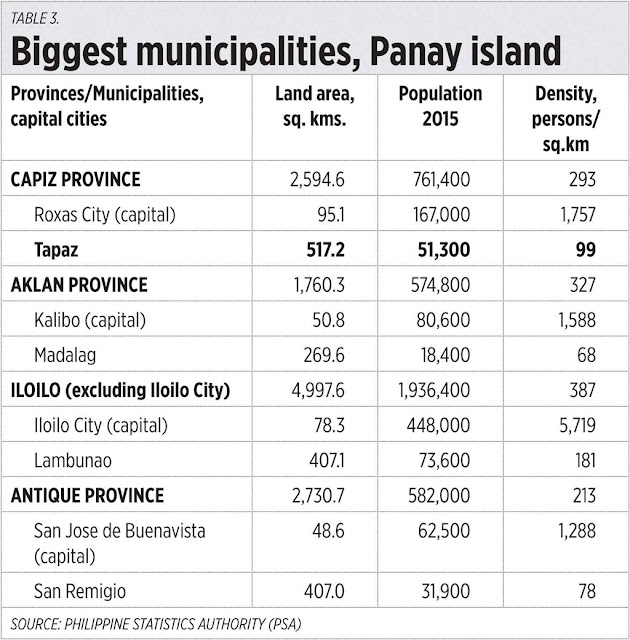 The municipality of Tapaz hosts the beautiful and very peaceful Marugo lake. My daughters and I enjoyed the swimming pool overlooking the lake. Then in the barrios there are four small waterfalls.

Mayor Palomar proudly enumerated the new structures that have been built there in the last three years — a new public market, a bus terminal, a new four-storey municipal hall to be finished this year, and many new cemented roads going to far away barrios. Coming soon is a municipal hospital.

The single biggest project in the municipality will be the construction of the management office of the Panay River Basin Integrated Development Project (PRBIDP), a P26-billion multi-year project that includes the construction of several dams for hydro power, bulk water, and irrigation along the huge and wide Panay River. The 18-MW hydro power plant will help address the problem of frequent blackouts in the province.

Panay island is lucky to have no active volcano and still have many big mountains, many big rivers and waterfalls.

Economic development should start from local businesses and local governments that optimize whatever resources they have, and not be too dependent on the Office of the President and the various national agencies.

Meanwhile, volcanoes and earthquakes, strong or mild, are 100% part of Philippines’ “geological DNA.” No earthquakes and volcanoes, no Philippines. Our archipelago came from under the sea.