Among the stories we hear and read in the debates on higher tobacco/alcohol tax, smoking/vaping ban, are that 1.) smoking prevalence remains high and rising, 2.) vaping is not a smoking-cessation tool but smoking-enhancement, and, 3.) more government taxation and prohibitions are good to protect public health.

These are all myths and not consistent with facts. Here are the numbers and reasons why.

On No. 1, in most countries, smoking prevalence is declining. There has been a big decline of 10-11 percentage points for South Korea, Japan, and the Philippines in a span of 16 years. And as of 2015, only 2% of Philippine adults and 4.5% of youths were users of smokeless tobacco or e-cigarettes, vaping products (see Table). 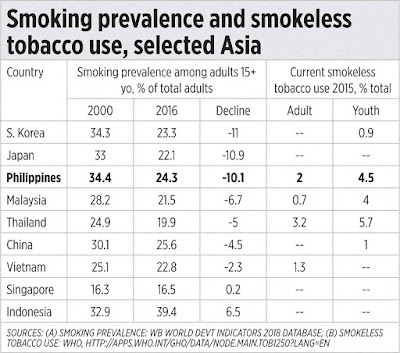 On No. 2, vaping products have actually become smoking substitutes or smoking-cessation tools, leading to a decline in smoking prevalence of five to 10 percentage points in the Philippines, Malaysia, and Thailand as a portion of their smokers shift to smokeless, non-burning nicotine substitutes.

A “gateway theory” that vaping leads to smoking in young people is just a disproven hypothesis. In early 2019, a UK anti-smoking charity, Action on Smoking and Health (ASH), released a report showing that vaping remains uncommon among young people and is almost exclusively confined to current or past smokers, and that most teen vaping is experimental and short-lived.

Recently, the President, supported by the Department of Health, ordered a ban on vaping in public places. Government over-regulation follows the famous Newton’s third law of motion: “for every action there is an equal and opposite reaction.” Restated it becomes “for every government intervention and taxation, there is an equal and opposite distortion.”

Seven examples and cases below show why No. 3 above is wrong:

One, more prohibition means more corruption. Prostitution, drugs, certain gambling, gun running, etc. are prohibited, not just restricted and taxed in the Philippines. And these prohibited activities and products are all around. That implies that the police and government officials themselves, local and national, allow their proliferation in exchange for big bribes, other financial and political favour.

Two, more smuggling. The National Committee on Intellectual Property Rights (NCIPR) reported that full year 2018 seizures of pirated and counterfeit goods jumped to P23.6 billion. Of this, fake or smuggled cigarettes were P20.3 billion or 86% of total. Higher tobacco taxes under the TRAIN law of 2017 resulted in many smokers buying cheaper, smuggled tobacco.

Three, recent cases of coconut wine or lambanog poisoning in the Philippines. At least 23 people died due to suspected methanol poisoning, with over 500 hospitalized. As branded alcohol becomes more expensive due to more taxes, more drinkers shift to cheaper, untaxed, unbranded alcohol like lambanog, where products can include chemicals and prohibited substances.

Four, the Singapore vape ban has been in place for two to three years now. But instead of killing vaping, it sent it underground. There were seizures of $30,000 worth of illegal e-cigarettes in September, another $66,000 worth in November 2019.

Five, with misregulations around e-cigarettes in the US, illicit pods containing tetrahydrocannabinol (THC) oil together with Vitamin E acetate as a thickening agent have become widely available. Around 55 people have died after using these black market products rather than standard vape juice.

Six, when I was in southern Sweden in 2003 for two months, I noticed and read that Swedes who wanted cheaper booze would travel to Denmark to buy lots of beer and alcohol because Sweden’s alcohol taxes are very high. The same in Scotland after “minimum unit pricing” on alcohol was introduced in 2018 — Scot drinkers would go to England across the border to get cheaper alcohol.

Seven, in the UK, smoking data released after the implementation of plain packaging for tobacco products shows that for the first time in seven years, the smoking rate has risen. Illicit and smuggled tobacco became much easier because of the ease of copying the packs and cheaper prices. The same thing happened in Australia after its plain packaging policy was instated in 2012 — illegal tobacco use came in higher starting 2013, shown in KPMG study.

Friedrich Hayek has reiterated that “all-knowing” pretense and central planning of a nanny state can backfire. Thus, the state should step back from over-regulations and prohibitions. People own their bodies, not the state or NGOs. More state prohibitions only send people to seek illicit, even dangerous products and activities.
---------------