The good news about the Philippines’ GDP growth of 5.9% in 2019 is that it is high by global and regional trends. The bad news is that growth is decelerating since 2016 and our GDP size remains small. With a low economic base, if we keep growing by just 5-6% yearly, it will take us many decades to be at par with the per capita incomes of our neighbors Malaysia, Singapore, Hong Kong, and Thailand even if they grow only 2-3% yearly. (See Table 1). 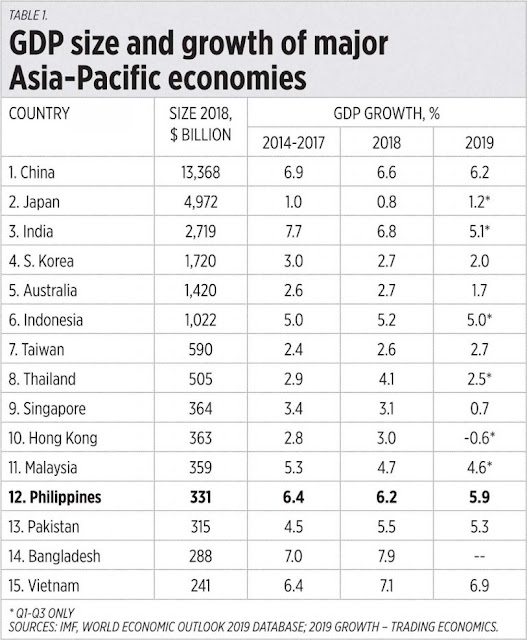 And an ironic thing about growth in 2019 is that while government consumption was sizzling at 10.5% growth, capital formation or private investments was contracting at -0.6%.

Obviously, more politics, more government taxation and interventions were among the big reasons why private investments are contracting and overall growth is decelerating: 6.9% in 2016, 6.7% in 2017, 6.2% in 2018, 5.9% in 2019. High inflation and decline in household consumption (which makes up about 65% of GDP) immediately followed when various tax hikes were implemented under the TRAIN law of 2017.

Now we see the selection of the UP Diliman Chancellorship being colored by more politics. There are only two nominees — Dr. Fidel Nemenzo, Professor at UP Institute of Mathematics and known regionally for his research output and Math leadership, who is also the current Vice-Chancellor for Research and Development, and Prof. Ferdinand Manegdeg, Dean of the UP College of Engineering, who has no PhD.

UP Diliman (UPD) would have the highest concentration of PhD faculty per 100 students in the whole country. Having a PhD is the minimum requirement to be an Associate Professor. So if UPD is at the forefront of advancing academic excellence in many disciplines, how could a would-be head, an aspiring Chancellor of UPD, be non-excellent academically? That is a lousy situation. Only more politics, not more academic achievements, would push this kind of situation.

That is why many units and faculty members are alarmed and they take explicit positions of supporting Dr. Nemenzo. A letter by UPD faculty members submitted to the UP Board of Regents (BoR) had 452 signatories including at least five Professors Emiriti, 70 Professors, 65 Associate Professors, 182 Assistant Professors, 89 Instructors, and 28 Lecturers. The growth of his support base is accelerating — unlike the Philippines’ GDP growth which is decelerating.

Consider also my alma mater, the UP School of Economics — 100% of its faculty members are PhD holders and I cannot see anyone there supporting someone who is not excellent in academics as UPD Chancellor.

Recently two pieces of fake news were being spread by desperate groups who cannot cite academic excellence as an important factor for UPD Chancellorship.

One is red-tagging, saying that Dr. Fidel Nemenzo is a communist and if he becomes the Chancellor, lefties and commies will have a grand time in UPD. Garbage. The Chancellor would be busy positioning UPD in the forefront of advance science and technology research, and teaching to help prepare the country in the current Fourth Industrial Revolution (FIRe) and artificial intelligence (AI) advances. Outmoded claims of commie ideology would be far from his concerns.

The secondpiece of fake news has been dragging former UP President Francisco “Dodong” Nemenzo, Jr. — Fidel’s father — into the UP-Ayala Technohub deal. They say that a “leftist UP President” has produced an “onerous” deal.

I will quote UP College of Law Professor Jay Batongbacal in debunking this. Jay wrote in his public post on Facebook on Jan. 26: “The contract was signed upon authority of the Board of Regents by UP President Emerlinda Roman… These liars and idiots then rely on innuendo, implying that since the process of converting the former idle lands of UP began during the term of UP President Francisco Nemenzo, it was the Left that selected Ayala, and therefore the contract is by the Left.”

More politics, more government taxation and policy reversals midway have resulted in the country’s growth deceleration. We hope that UPD will not be dragged into more politics. Academic track records and vision by the nominee, support and respect by the academic faculty, alumni, non-academic staff and students, should guide in the appointment of the next UPD Chancellor when the BoR meet and decide next week.
---------------