Regional and global inflation has been generally rising over the last two months of 2019. The Philippines reached its lowest inflation since around 2016 of only 0.8% last October, then a quick uptick to 2.5% by December (see Table 1). 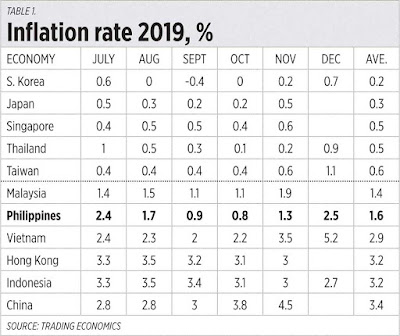 The Philippines’ full year 2019 inflation was 2.5% and the “inflation valedictorian” position claimed by the Philippines with 5.2% in 2018 has been snatched by Indonesia with 3% in 2019.

I checked the commodities inflation of the country, and saw that three groups have experienced significant declines in 2019 vs. 2018 levels: alcohol and tobacco, food, and transport. All other commodity groups have been generally flat or saw mild declines in prices. While this affirms the statement that the rice tariffcation law (RTL) has contributed to a significant price decline in rice and other food items, this contradicts the claim by some government agencies like the Land Transportation Franchising and Regulatory Board and Philippine Competition Commission (PCC) that fares by less-regulated transportation like transport network vehicle service (TNVS) are rising too fast (see Table 2). 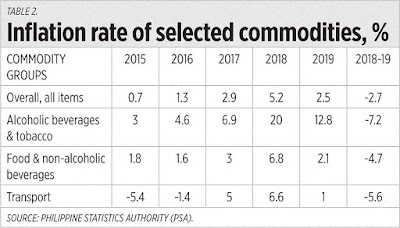 If the PCC in particular thinks that there is “abuse of market power” by the dominant TNVS despite the presence of multiple choices for the passengers, then the PCC should also investigate coffee shops to see why brewed coffee is only P20 a cup in convenience stores like 7-Eleven but P100 to P120 in Starbucks. Or investigate the two dominant local airlines to see why their fares from, say, Manila to Cebu are at least P1,000 more expensive than the smaller regional airline. 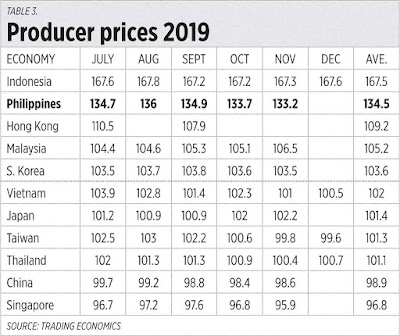 Two headwinds face the Philippines in fighting high inflation in 2020. One is internal: the third part of the implementation of the “expensive energy is beautiful” policy via higher oil-coal taxes under the TRAIn (Tax Reform for Acceleration and Inclusion) law. The other is external: renewed political and military conflict in the Middle East with an immediate impact on world oil prices and the deployment of OFWs (Overseas Filipino Workers) to the region.

So two important lessons here: One, more government taxation of very useful commodities like oil and coal is anti-consumer and anti-producer; and, two, more government fines and restrictions on certain sectors like land transportation are often based on wrong premises and assumptions, and work to limit the supply of services, and are inimical to passengers’ welfare.

Posted by Bienvenido Oplas Jr at 12:14 AM