Philippine universities do not seem to fare well even compared to many of their ASEAN neighbors. The Quacquarelli Symonds (QS) world university ranking is a good annual report, its scoring is based on six indicators: Academic peer review, 40%; Faculty/Student ratio; 20%, Citations per faculty; 20%, Employer reputation; 10%, and International student ratio and International staff ratio, 5% each.

I checked the QS ranking of 2020 — many Asian universities have improved their global ranking from the 2015 to 2020 reports. The University of the Philippines (UP) ranked only #356 and the three next famous schools in the country ranked 600+ or lower (see Table 1). 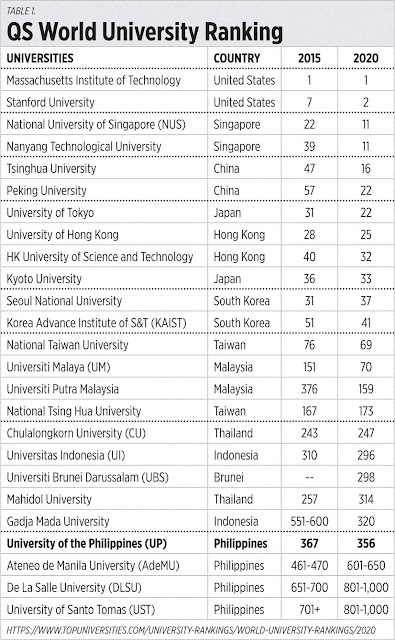 Then I checked details of the top universities in the ASEAN. In terms of research output, they have high to very high output while the four Philippine universities have either medium or low output (see Table 2).

Clearly there is problem in the quality of Philippine universities, especially the other state universities and colleges (SUCs), taxpayer-funded with a budget of P51 billion (excluding UP) in 2019 and none of them in the global top 1,000.

For UP in particular, it seems to be spreading out thinly. UP’s 38,000+ students are the total in its many campuses: Diliman, Manila, BGC, Los Baños, Baguio, Clark, Cebu, Iloilo, Mindanao, and the Open University.

Now there is a big issue in UP Diliman (UPD), the main campus in the UP System. In February, the UP Board of Regents (BOR) will choose the next UPD Chancellor, the highest official in the campus. There are only two candidates and they seem to be worlds apart in terms of academic achievements.

Dr. Fidel Nemenzo is a Professor of Mathematics and currently UPD Vice-Chancellor for Research and Development. He got his BS Math degree from UP, his MS and PhD Math from Sophia University in Tokyo, Japan, specializing in pure mathematics. He is well-respected in mathematical academic circles here and abroad. Nemenzo was also a former President of the Mathematical Society of the Philippines, and the Southeast Asian Mathematical Society and has received awards in his discipline such as the Achievement Award in Mathematics from the National Research Council of the Philippines (NRCP).

The other candidate is Prof. Ferdinand Manegdeg, current Dean of the UP College of Engineering, the largest college in the university in terms of faculty and student population. He has a masters degree from the University of Leeds, but has no PhD, unlike many in his faculty. In the top universities in the region and the world, a PhD is the minimum requirement for acceptance into the faculty.

So someone with expertise in the basic science and math and not just applied science, someone with higher regional and global academic exposure and leadership, is the most appropriate to head UPD.

I hope the BOR will choose Dr. Nemenzo as the next UPD Chancellor. As he envisioned, UPD will become an inter-disciplinary hub working with other government agencies, industry, and civil society, and become a strong graduate university especially in the basic sciences.

There is too much politics and government intervention in many sectors of our country. I hope the selection and appointment of UPD Chancellor will be guided by academic leadership and not by more politics.
------------------

Posted by Bienvenido Oplas Jr at 1:12 AM