Imagine these four cases of emotional hardships and social stigma in one island in the Philippines in the late 1930s.

One, an unwed mother who got pregnant — she wished that the life in her tummy be aborted, or that she would get a miscarriage, but the baby was born safely. Motherly love takes over but she cannot touch her daughter until it is a toddler, though she can see the child daily. Then the child is brought to Manila to live a “normal life” without her permission and she can only scream and cry in deep sadness.

Two, a sick lady who has not been visited by her family and her boyfriend for years — then the boyfriend appears to visit her, with flowers. They see each other but they cannot embrace, the guard handing the flower to her, and they can only stare at each other, in deep sadness and tears that they can not even hold each other’s hands.

Three, another sick lady who has a persistent admirer but does not love him back yet. She then develops a crush on a foreigner and when that foreigner escaped to the mountains ashamed of his disease, she follows him, tries to befriend him. The foreigner rape her. In deep sadness at what happened to her, she jumps from a cliff and dies.

Four, the father of the child who was brought to Manila, escapes the island to look for his daughter. On a bus, his fellow passengers see his disease, he is forced to get out and is verbally assaulted, his bag that contains his savings was thrown away leaving him penniless and deeply disappointed. He is forced to go back to the island.

These are the stories of Anna, Ditas, Doris, and Kanor. Different individuals, different stories, but they have a common experience — they all have Hansen’s disease or leprosy or ketong in Filipino, and they all live in the Culion Leper Colony in Palawan.

Theirs’ and other patients’ riveting stories and experiences were fantastically captured in the movie Culion, the first movie produced by iOptions Ventures Corp. owned by Palawan-based entrepreneurs Peter and Gilie Sing.

I saw the premier showing of Culion on Dec. 21 at SM Megamall cinema and I was stuck in my seat, cried two times in the scenes of Anna (Iza Calzado) and Ditas (Merryl Soriano). The scene between Ditas and her boyfriend Greg (John Lloyd Cruz) was so powerful — no words, no conversation, only tears, deep sadness, and music.

After the movie, I saw Peter and I jokingly told him, “F___ you Peter, you made me cry!” I was also happy to see that a friend, Upeng Galang-Fernandez, is one of the characters and actresses in the movie.

This is a “must see” movie in the Metro Manila Film Festival 2019, and is showing nationwide from Dec. 25 to Jan. 7. Kudos to the team — scriptwriter Ricky Lee, director Alvin Yapan, cinematographer Neil Daza, producer Mark Shandii Bacolod, actresses Iza, Merryl, Jasmine Curtis-Smith (Doris), and the many other cast and crew. 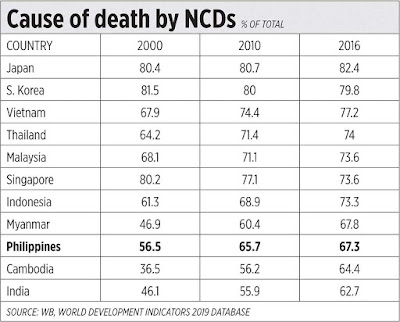 And that is why people now are effectively living longer, healthier, wealthier. A good reminder this holiday season for us to be more hopeful about the future.