Water price control of the previous administration was wrong. Penalty payment control of the current administration is wrong. Arbitrary dishonor of contracts and changing of rules midway is wrong. But then, could other players wanting to snatch the contract from the existing two water concessionaires be behind the aggressive attacks of Duterte? 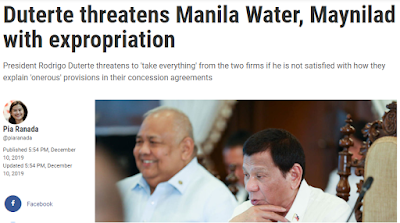 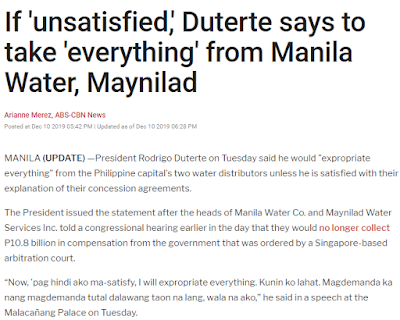 "the water PPP has “contributed much to improve public welfare by having more than doubled the number of customers served, provided 24 hour water service availability that meets health standards, while addressing the needs of millions in the poor communities. The improvements in service delivery came after the two concessionaires poured in a combined P105 billion in investments to expand and upgrade the water and sewage network, achieved without adding to government’s fiscal burden or public debt exposure.”

"The MWSS decision constitutes a rape of the rule of law even if the concessionaires decided to hold their horses. If left to stand, it establishes a precedent that a guilty party can to reap political pogi points by scapegoating a vulnerable party. The scapegoating of Manila Water certainly deflects the conversation from the threatened firing of the MWSS leadership for incompetence."

"If the concession contracts are cancelled arbitrarily, there will be panic in the business community. All the gains we made improving the ease of doing business will be cancelled.
Instead of terrorizing the concessions, it will be more constructive to work with them for better outcomes."

"Prior to Manila Water, 63% of every liter produced never reached the intended customer because of broken MWSS pipes and pilferage. Manila Water was able to reduce “system loss” or non-revenue water to only 11%. This is at par with international standards of water distribution efficiency.
An ADB study says the reduction in system loss is equivalent to having built a new water dam!"


And this report, could the "new contract" being drafted by the DOJ be properly worded to suit the qualifications of whoever they want to snatch the concession/s?

Meanwhile, I posted the above notes and links in my fb wall when a friend from UP in the 80s suddenly butt in. He is a son of a brave politician in Negros Occidental who consistently opposed the Marcos dictatorship in the 80s, the late Assemblyman Wilson Gamboa. Now a Duterte fanatic, this guy would quickly resort to personal attacks when ideas do not suit his illusions of the Duterte government. See this, he turned his lousy ego on me, tsk tsk tsk. Shameless Lauro Gamboa. 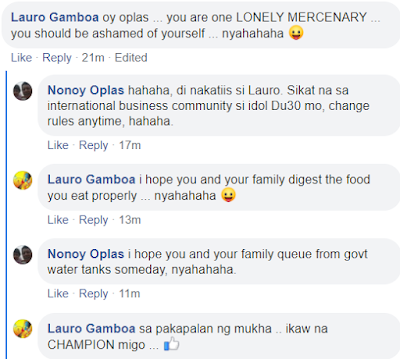 Posted by Bienvenido Oplas Jr at 1:07 AM