BWorld 395, Culion the movie and SMB

Leprosy or Hansen’s disease, ketong in Tagalog and aro in Ilongo, was a dreaded disease. People with the disease, or even just suspected of having it, were avoided, even ridiculed and ostracized. And the Culion leper colony in Palawan became the national dumping ground of people with leprosy, even those without the disease but who were victims of witch hunts by some politicians or envious neighbors.

Over bottles of beer, a former dorm-mate in the Narra Residence Hall in UP Diliman, Peter Sing, mentioned his observations about the Culion leper colony in Palawan and said that his company, iOptions Ventures Corp., would produce a movie about it.

I must admit that I myself was among those who dreaded people with leprosy when I was young in the 1970s. After a brief research about Culion, here is what I gathered. (See the Table. — Ed.) 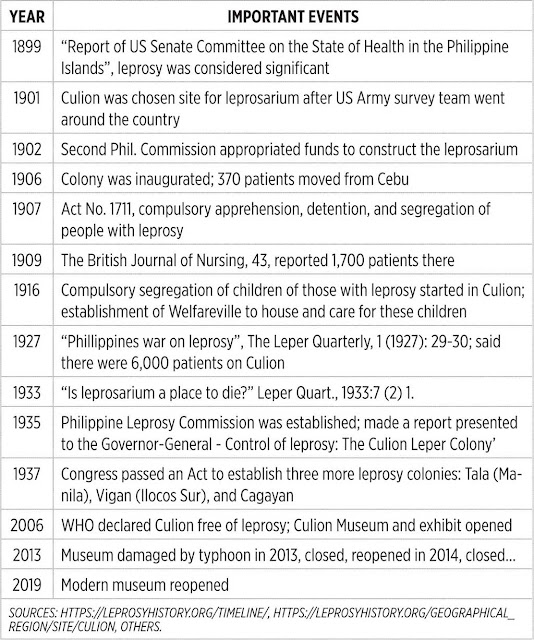 So it was a harrowing, dangerous situation from 1907 to the 1930s with “compulsory apprehension, detention” of people. Literal abduction of people by the hundreds, or thousands, from around the country who were brought to Culion against their will, with actual or fictional leprosy.

The social stigma was horrible — in some areas patients were forced to wear demeaning bells to warn everyone of their presence so others could avoid them. It was also believed that the disease was a curse and punishment for sinners and the “unclean.”

Although Culion was “the largest and best known institution of its kind in the world, and beyond comparison in area and natural facilities,” scientific understanding at that time was still limited and so social ostracization based on myths and unscientific beliefs persisted.

And since land and sea transportation that time was poor, it was very difficult or impossible for many families of the detained or abducted to visit their loved ones. Bordering on inhumanity.

Now Culion is one of the few selected movies to be shown in the up-coming Metro Manila Film Festival (MMFF) 2019. The team behind it is composed of some big shots in the Philippines movie industry — scriptwriter Ricky Lee, director Alvin Yapan, cinematographer Neil Daza, producer Mark Shandii Bacolod, actresses Iza Calzado, Merryl Soriano, and Jasmine Curtis-Smith.

I am very happy to learn that the couple behind iOptions Ventures Corp., Peter and Gilie Sing, both fellow UP alumni, put lots of time, money, and other resources to produce this kind of movie. Put faces and cinematic facts to those harrowing experiences of many decades, among the dark days of the Philippines’ medical history. With families separated by disease, ignorance, and sometimes politics, the human suffering and anguish was terrible. But in the end, human spirit, hope, and resilience prevailed.

Now, speaking of beer, I want to share this “translation/explanation” revolving around the words found on the San Miguel bottle that I heard from many drinking buddies in UP Diliman in the 1980s. On the bottle, we see these marks, from top to bottom:

Pale Pilsen/ And Bottled By

The older bottles have this mark at the bottom, “Net Contents 320 ml.”

Here’s what the letters stand for:

PALE PILSEN — Pag Ang Labanan E Pabilisan, Ingat Lang Sapagkat Etong Nangyari. (If the fight is fast, be careful as this is what happens.)

PALE PILSEN — Pati Ako Lasing Eh, P__ Ina, Lasing Sila, Enjoy Na (Even I would get drunk, son of a bitch, they were drunk, time to enjoy)

AND BOTTLED BY — Ang Nangyari Dito, Bawat Order Tiyak Trouble, Lasing Eh, Dumampot/ Buti Yelo (What happened here is with each order, trouble was sure, they were drunk, picked something up/ good thing it was ice)

SAN MIGUEL BREWERY — Sampu Ang Naupakan, May Isang Gago, Umeksena Eh Loko. Binanatan, Rumesbak Eh Walang Enabutan, Riot Yan (Ten were beaten up, there was one idiot, acted crazy. Beaten, fought back but got nowhere, it was a riot)