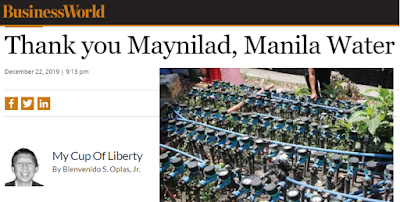 After President Rodrigo Duterte lashed out at the two water companies that hold concession agreements (CA) with the government via the Metropolitan Waterworks and Sewerage System (MWSS) Regulatory Office (MWSS-RO) on Dec. 3, the stock prices of Manila Water (owned by Ayala) and companies that own Maynilad Water (MPIC, DMCI, a Japanese firm) suffered significant declines starting Dec. 4 (see Table 1).

Supporters and fanatics of the President echoed his tirade that both companies are abusive and engage in “economic sabotage.” Fake news, lousy and dishonest accusations. The public, the residents of Metro Manila and neighboring areas, have greatly benefitted from water privatization with higher, cleaner water connection direct to their houses. Let the numbers speak (see Table 2). 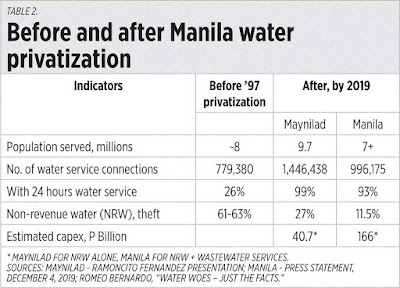 Two myths stand out in the heavily politicized water issue.

One, government interference in rate setting is “not allowed” in the CA. A flat out lie. In every step of rate setting, MWSS-RO and other agencies are involved: approval of tariff rates and schedules after public hearing, approval of auditing which expenditures are prudent and efficient, approval of cost of capital that the concessionaires will receive, and so on. Thanks Romy Bernardo for pointing these out in your article.

Two, the water rates are “onerous.” Say that again, purveyors of fake news and lies? In our latest water bill for November 2019 with 11 cubic meters consumption, the basic charge was P124.83, something like P11.35/cu.m. One cu.m. is 1,000 liters, or nearly five drums because one drum is 208 liters. My family take a bath daily, wash dishes, clothes, the floor, etc. and the water company charges us only P125 in one month — the price of one cup of coffee in Starbucks, etc. — and people call it “onerous,” “abusive”? Big lie.


This Christmas season, aside from celebrating the birth of Christ, we also express gratitude to friends, families and partners, and companies that make our life more modern, more comfortable. In this case, I say thank you, Maynilad Water and Manila Water. But no thanks to the President and his fanatics.
---------------

Posted by Bienvenido Oplas Jr at 12:15 AM