* My article in BusinessWorld yesterday.

Government populism is the trick of demonizing big corporations so that it can impose new sets of interventions, regulations, prohibitions, price control, and even engineer corporate takeover by crony firms. This is happening in the country’s water and power or electricity sector now.

HARASSMENT OF WATER CONCESSIONAIRES
When Maynilad Water and Manila Water went to the Permanent Court of Arbitration (PCA) in Singapore to seek damages when the Philippine government did not allow price adjustments in 2013–2017, i.e., water price control, the two firms won. PCA ruled that the government should pay Manila Water P7.4 billion, Maynilad Water P3.4 billion.

From there, President Rodrigo Duterte lambasted the two companies daily. Then Congressional hearings and harassment, new contracts drafted by the DOJ, then MWSS officially cancelled the concession extension to 2037. The two firms that earlier signified that they will no longer collect the penalty from government can stay only until end-2022, after which new private concessionaires will be named by the administration before its term ends by June 2022. Very likely only crony firms will be entertained. 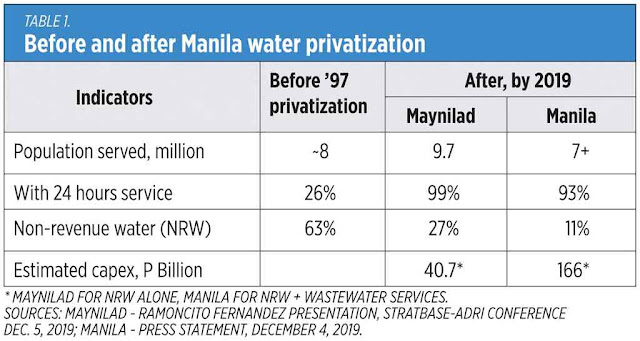 For improving and raising water delivery to households, for saving poor families from buying expensive water from water trucks, for expanding sewerage and water treatment services, they are now demonized and penalized. At P30 to P35 per cubic meter tariff, five drums of water, that is not expensive. The P30–40 for one liter of bottled water is expensive, but people do not complain.

When this will be implemented, consumers will suffer, rich and poor, residential and commercial, industrial. They will suffer from more yellow-red alerts during the hot months of March to June, planned or actual rotating blackouts and darkness.

Why? Because no one has been investing in peaking plants, power plants that run only during peak hours in high-demand months.

See — not a single plant, not even 1 MW of oil-based peaking plant to address demand spikes during rush hours. This is dangerous. 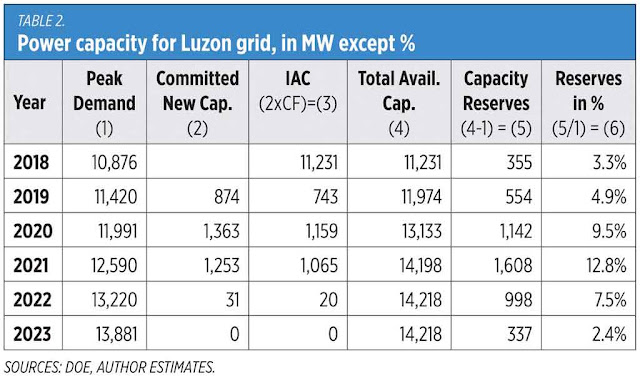 Even without new power price control via lower secondary price cap, Luzon grid is already in danger due to low reserves margin, especially by 2022–23. Add forced outages and unscheduled shutdowns due to many old and ageing conventional plants and intermittent energy from renewables, the risk of blackouts go up. Yellow-red alerts will surely be back in 2020 and beyond.

The ERC should not proceed with the planned new power price control. In fact they — ERC, DOE, IEMOP — should lift and abolish price control, at least the secondary price cap. Attract investors in peaking plants and avoid the risks of blackouts.

And this water politics and harassment by the Duterte administration, the arbitrary change of rules midway, is bad news for foreign investments. Lack of rule of law, disrespect of contracts, bad.
----------------

Posted by Bienvenido Oplas Jr at 12:33 AM