I like new UK PM Boris Johnson or "Bojo". So I was happy when his Conservative Party won big time last December 13 elections. 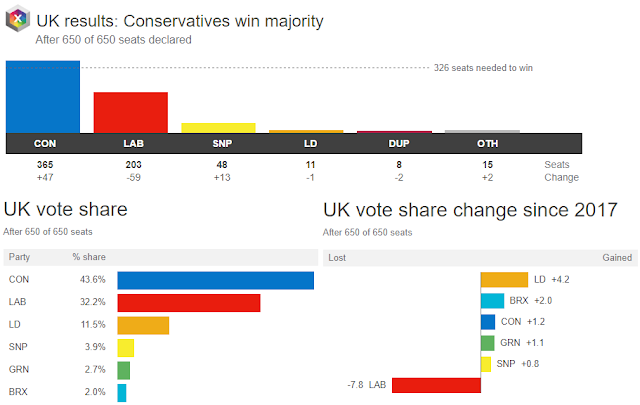 Now leaving the EU and its horrible bureaucracies and restrictions is becoming more certain. June 2016, majority of UK voters already decided in a referendum that they wanted to leave the EU, after 3 1/2 years it's not yet done.

I like this plan by Bojo during the campaign period -- focus on what the UK taxpayers need, not what the EU and UN bureaucracies need. Protect your people from criminals and diseases, get talented and ambitious immigrants and not welfare-seeking ones, strong economy and cheap energy, not expensive energy to "save the planet" (ie, EU and UN climacrats and junketers). 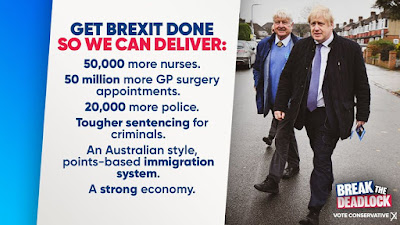 Brexit means exit from EU prohibitions to have FTA, zero or low tariff with US, Malaysia, Canada Australia, etc. aside from UK-EU FTA. Free trade and people mobility should apply to as many countries and territories as possible, not just to fellow EU members.


I remember that after the Brexit victory in June 2016, leaders wanted a 16% corporate income tax (CIT) for UK. They can do that outside the EU, but never inside the EU. EU hates tax competition, only tax harmonization and monotony.
A country cannot have tax cut because that will undermine investment attractiveness of other EU members. Cannot cut tariff with other countries outside the EU because that's trade competition. Only trade and tariff harmonization is allowed. EU is free trade only among members but protectionism with other countries outside the EU.

(1) What the Boris landslide means for the climate debate
By Christopher Monckton of Brenchley  December 15, 2019
https://wattsupwiththat.com/2019/12/15/what-the-boris-landslide-means-for-the-climate-debate/

“he will make the abolition of the Bolshevik Broadcasting Commisariat’s licence fee his first priority."

“The US president said a future US-UK trade agreement has "the potential to be far bigger and more lucrative" than any deal that could have been made with the EU.

Indeed, with Mr Johnson assured of being Britain's prime minister for the next five years, and Mr Trump well-placed to secure re-election in next year's presidential election contest, there is every prospect that the two leaders could herald a new golden era of transatlantic relations not seen since the alliance of Mrs Thatcher and US President Ronald Reagan in the 1980s.”
Posted by Bienvenido Oplas Jr at 11:32 PM