The Philippines with 7,600+ islands and islets and 108 million population still has difficulty reaching $10 billion in tourism revenues, something that many of our neighbors in the region had attained nearly a decade ago (see Table 1). 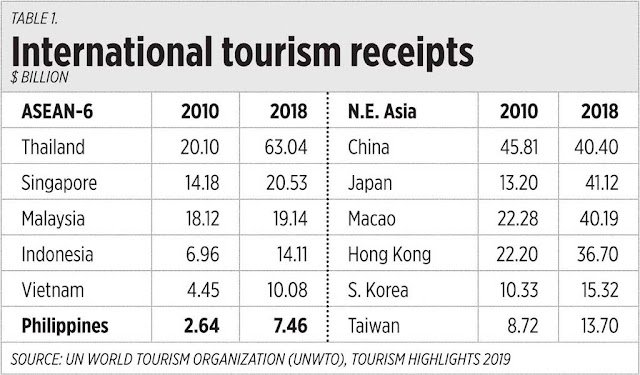 Among the data discussed in the tourism paper are milestones in the country’s airport development. I summarized and shortened the long table here, data gaps are indicated (see Table 2).

Seemingly lacking in our airport infrastructure is the development of budget terminals or low-cost carrier terminals (LCCTs). Japan has two (Kansai-Osaka and Narita Terminal 3), and these three tourism powerhouses in the ASEAN have one each: Singapore (Terminal 4), Malaysia (KLIA 2), and Thailand (Don Mueang). Not as glitzy as the regular terminals, these LCCTs are also modern yet charge lower for airlines and passengers and hence, further attracting more foreign visitors.

Another activity during the TAPP conference was a press conference with the heads of the Foreign Chambers of the Philippines composed of the chamber of commerce of the US, Canada, EU, Australia-New Zealand, Japan, and South Korea. Among the topics discussed was the Philippines’ taxation policy to attract more foreign direct investments (FDIs).

When the TRAIN (Tax Reform for Acceleration and Inclusion Act) law was enacted in 2017 and TRAIN 2 bill (renamed TRABAHO — Tax Reform for Attracting Better and Higher Quality Opportunities — bill) was filed in 2018, some 15 multinational companies with regional headquarters or regional operating headquarters in the country have left as the special taxes they enjoyed have been removed or to be removed. This was articulated by the Philippine Association of Multinational Companies Regional Headquarters Inc. Director Celeste Ilagan.

The unpopular TRABAHO bill was renamed CITIRA (Corporate Income Tax and Incentive Rationalization Act) bill this year and it still causes discomfort to many multinationals because the pace of reducing the corporate income tax (CIT) is long, from 30% to 20% in 10 years, while the removal of the gross income earned (GIE, 5%) and other fiscal incentives will be done in the first year of implementation. Indonesia plans to cut its CIT from the current 26% to 20% in two years.

So bottlenecks in airports and tourism and uncertainties in taxation, these two plus other factors contribute to low level of FDIs in the country. And I would add one more factor — some of our competition policies as implemented by the Philippine Competition Commission seem to be anti-multinationals.

Take the case of transport network vehicle services (TNVS). When US multinational Uber decided to leave the Philippines (and the ASEAN) in 2018, many factors contributed especially the heavy bureaucracies and penalties imposed by the Land Transportation Franchising and Regulatory Board. When Uber finally packed up in April 2018 and merged as minority investor in the remaining TNVS multinational, Grab, Uber was also fined by the PCC for hurrying the merger.

Recently, the PCC fined Grab P23.5 million for certain violations in its imposed requirements, including “overcharging” the passengers and acting as virtual monopolist.

This thing, “overcharging,” is a misnomer. If someone held a gun at people’s heads making them ride the costly TNVS, then that is clear overcharging and coercion. But people have many choices — jeepneys, buses, vans, regular taxis, new TNVS, Angkas motorcycle taxis. Thus, when people still choose the more costly TNVS, they do it for some other reasons like safety and comfort.

So that multi-million fine would ultimately be passed on to the public — directly via higher fare for exclusive rides, or indirectly via low fares but longer waiting time, more shared and indirect rides than exclusive direct rides.

When private enterprises create more jobs and provide goods and services to consumers, they are already doing a public service. Government should step back from more regulations and prohibitions, more taxation and intervention.
-----------------