“Under a system of perfectly free commerce, each country naturally devotes its capital and labor to such employments as are most beneficial to each. This pursuit of individual advantage is admirably connected with the universal good of the whole.”

Despite many stories of “slowing” growth and exports globally last year, many countries and economies actually registered significant improvement in exports, except for a few like the Philippines. The creation of the World Trade Organization (WTO) in 1995 was a big factor for global trade expansion as there are now globally binding rules with penalties to discourage countries and governments from continuing high protectionism. These are shown in the numbers in Table 1 — exports level in 1994 (pre-WTO) and 1995, then in succeeding decades. 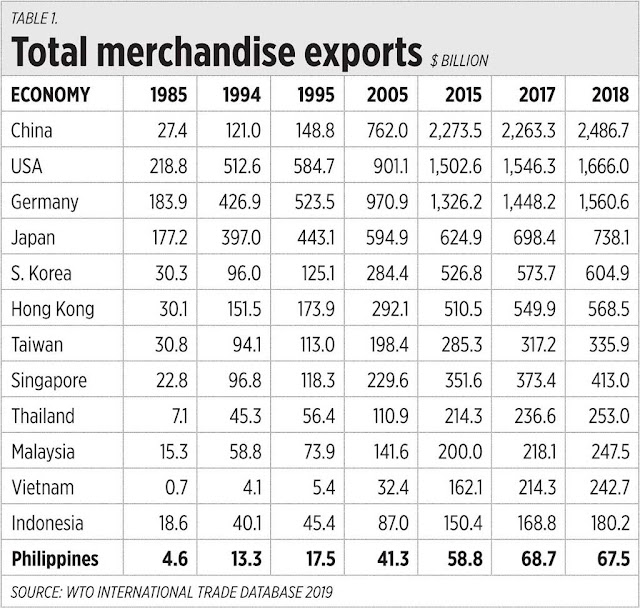 The bulk of countries’ exports are manufactured products — machinery and transport equipment, chemicals, iron and steel, office and telecom equipment, circuits and electronic components, etc. And two countries really stood out in terms of a huge jump in manufacturing exports — China and Vietnam. China’s manufactured exports jumped 233x from 1985-2018 (or in just 33 years) while Vietnam’s jumped 12.5x from 2005-2018. If the WTO has data for 1985, very likely Vietnam’s expansion here would probably be at least 150x (see Table 2). 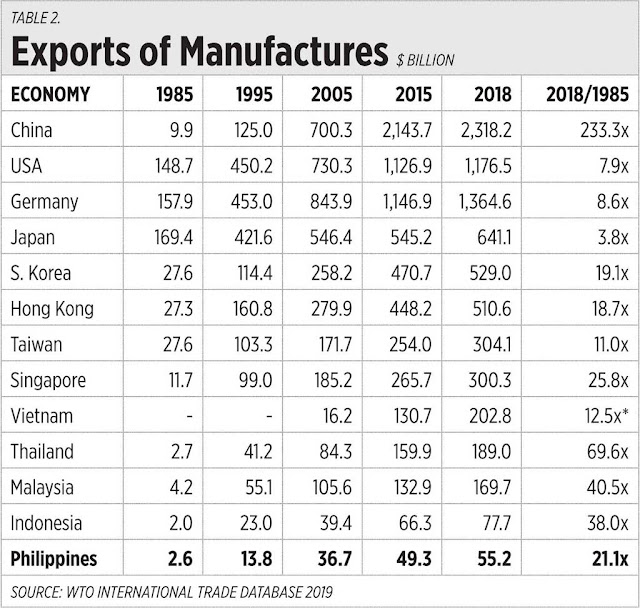 There are many factors that contribute to such huge expansion in manufactured exports by China, Vietnam, Thailand, Malaysia, and Indonesia over the past three decades. Like industrial, investment, and taxation policies. But beyond macroeconomic policies, often forgotten in economic and trade discourses are energy policies. Manufacturing requires lots of power, electricity that runs 24/7 with no blackouts even for a minute except during big natural disasters (see Table 3). 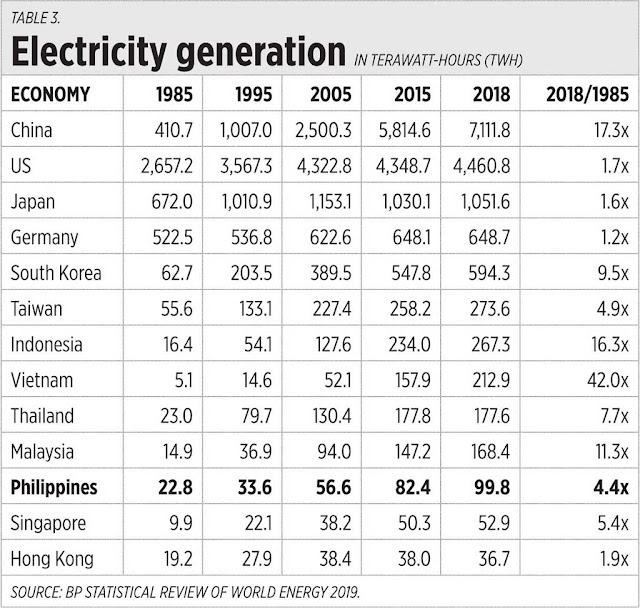 The bulk of such power sources are coal and natural gas, and oil for peaking plants. As countries slow down if not reduce their electricity generation, often in the guise of “saving the planet,” their manufacturing output and overall GDP growth also slow down. Like Germany, Japan, and the US.

The Philippines should do more to significantly expand its merchandise exports and manufacturing. It should have more free trade and globalization, and less protectionism and nationalism. It should have more power capacity, a huge expansion in electricity generation from fossil fuels like coal, gas and oil, even nuclear, and less reliance on intermittent, unstable, weather/battery/subsidy-dependent renewables like solar-wind.
--------------