April 2005 from three friends and me. The image below I got from the web, I didn't make it.

How is monopolization avoided in a free market society? or in a minimal government rather? As the usual lines from red-tainted dicussions go… company A grows, "eats up" smaller companies B, C, D..eventually becoming a super company, "crushing" any other small companies with similar product. Now, super company A controls the supply..it can now dictate the prices, etc. How is this situation eliminated by a minimal government? – Yo.

My answer to him:

Corporate growth is often due to (a) innovation, and (b) government-sponsored monopoly through single franchise. We know that (b) is bad, that is why we want a small government, not a monstrous
and overly-interventionist one. 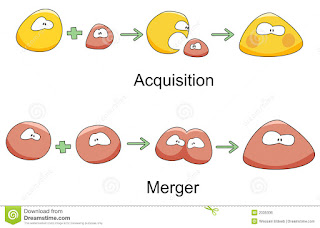 Hi, Noy and Yo, Include nyo na rin and mergers and acquisitions. This is the fast track to beating competition and creating what seems like a monopoly. It automatically increases capitalization and the much needed network or reach to consumers.

Another is the practice of buying and selling products. Innovations sometimes take a backseat because of this shortcut. If a company wants to compete against a specific product, the cost-benefit analysis will boil down to which is costlier: developing your own product or just buying the profitable brand in the market. The latter is usually the pick.(Just like what Gokongwei group does in URC, or Nestle, too.). This same principle applies to a product which cannot take off from the ground. It will be sold to a company that has the means to re-launched it and make a profit of it. (Just like why Pop-Cola is now with  Coca-Cola). By the way, after San Miguel bought into Coca-Cola, do we have any other competitor right behind? Asia Brewery needs to accelerate its pace, I believe.

M & A's are the fastest way to become monstrous. Conglomerates are formed because the group would like to capture every available source of revenue, Dip itself into every business available. A holding company serves as the common link to all unrelated companies. It can also cushion impact of one unprofitable business whenever possible. But it can work itself otherwise just like what is happening to the Yuchengco Group with its Pacific Plans following the footsteps of CAP. Other companies in the group are on the defensive trying to prove that the rest of the group is financially sound.

In the financial sector,  M&A's are more actively practiced in recent years - after the Asian financial bore a hole on smaller banks. Banks have the advantage if they have a big capitalization and if the bank does consumer or retail banking, branches/network will be the key. So an M&A is the easier way.  It even paves the way to solving non-performing assets since regulations will force the surviving bank to clean up. It will also rationalize costs since it will give a chance to clean up the ranks and eradicate duplication of functions and positions - redundant employees, usually those whom each bank has been wanting to get rid of but cannot, can now legally be edged out of the new and efficient organization.

Innovation can also create monopolies (by industry or market segment) even for a long time and especially in case the innovation is covered by a patent (e.g. drugs) or copyright.

Some industries or product sectors are prone to monopolistic or cartelistic behavior.  This is probably more true for those in the upstream industry (raw materials or intermediate goods) or the basic goods sector where economies of scale and efficiency is more important than innovation.  Take the case of the local cement industry, it is definitely acting like a cartel especially now that a P25 per bag safeguard duty has been imposed.  No thanks to the big government protecting an industry that is 90% owned by the world's top three cement companies (La Farge, Holcim and Cemex).  Prior to the safeguards duty, the cartel-like behavior of the cement industry was checked by the surge in cheap cement imports such that for a time prices went down to as low as P50 per bag.

Accordingly, monopoly per se is not necessarily evil considering that a monopoly theoretically might be able to offer cheaper goods or services due to economies of scale particularly in supply sourcing and logistics.  What should be evil is "monopolistic" or "cartelistic" behavior which stifles free competition.  I do not know if this can be an exception to the "minimal government" posture but a solution to this may be a policy / regulation on competition and fair trade.

For the downstream or finished goods sector, I guess (sorry no data or study) it is much difficult to maintain a monopoly of the market where there is now too much market segmentation.  As an example, a car model now may have up to 15 variants compared to about 2 decades ago where a model may just have 2 variants.  In addition to innovation, the challenge for car companies is how to lower inventory and logistics costs to address the varying demands of each and every consumer.

I read this article from BusinessWeek which mentioned of a study indicating that it is feasible to create a new but "virtual" automotive company even at this late stage of the game.  The company is "virtual" because it will be outsourcing everything (from R&D, to auto parts manufacture, to assembly, to marketing and to distribution) and yet, it can still make money than most of the existing automotive companies.   I believe something similar is actually happening in the ICT industry, particularly those upstart telecom and electronic companies from china.