KUALA LUMPUR — I came to the capital city of Malaysia to speak at the Liberalism Conference of the Institute for Democracy and Economic Affairs (IDEAS) last Saturday, along with the launching of the International Property Rights Index (IPRI) 2019 by the Property Rights Alliance.

Whenever I go abroad I always observe how high or low the energy use is of the cities that I visit. It is obvious that energy use here in Kuala Lumpur is high — streets, tollways, buildings and other structures are well lit at night, there are many MRT, LRT, and Monorail (running on electricity) trips per hour and the MRT/LRT stations underground are well lit and air-conditioned.

I revisit two data sets that I put in my two recent energy columns here. Again, data on coal consumption in million tons oil equivalent (mtoe) is from the BP Statistical Review of World Energy (June 2019), data on population and GDP growth are from the World Bank, World Development Indicators database (August 2019). Dividing coal consumption over population, the kilos of oil equivalent (koe) per capita is derived. Growth rates in coal use and GDP are averaged per 10 years. 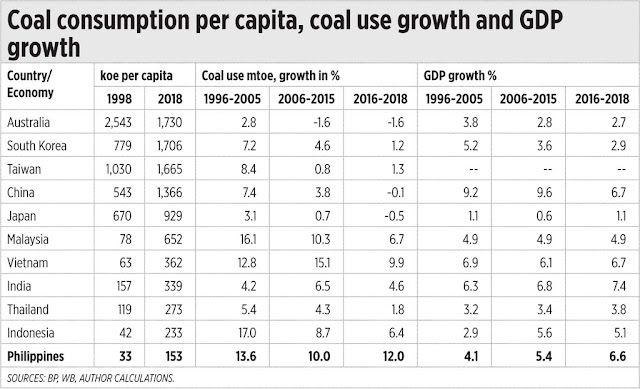 Three trends and facts emerge from the numbers in the table.
One, countries with high consumption of cheaper energy like coal, represented by their high coal koe per capita, also have higher income — Australia, South Korea, Taiwan, China, Japan, and Malaysia.

Two, the Philippines has the lowest, the smallest coal consumption among the major and emerging Asian economies — only 153 koe per person in 2018. Only one-fourth of Malaysia, one-sixth of Japan, one-ninth of China, and only 1/11 of South Korea and greenie Australia. Hong Kong’s per capita was 662 in 1998 and 837 in 2018 while Singapore’s was 0 in 1998 and 163 in 2018 or slightly higher than the Philippines. And the anti-coal groups and people in the Philippines say that ours is already high and scary that we should stop building new coal plants and retire soon existing ones? Lousy and idiotic argument.

Three, there is clear correlation between growth in cheap energy coal consumption and growth in GDP, at least for the countries covered above. Australia, Japan, and South Korea decelerated coal use from 2006 to 2018 and they also experienced growth deceleration. Malaysia, Vietnam, India, Indonesia, and the Philippines retained their high coal use and they also retained their high GDP growth.

While most anti-coal groups are watermelon (green outside, red inside) activists, some are outrightly pushing for their natural gas business. Demonize coal, prevent the construction of more coal plants so that the big distribution utilities and electric cooperatives will be forced to buy from their soon imported and more expensive LNG power to prevent massive blackouts in the country due to insufficient power supply.

Again, climate change is cyclical and natural, the warming-cooling cycle having been going on since planet Earth was born some 4.6 billion years ago. This is nature-made global warming and global cooling, not man-made or anthropogenic. The deceptive and dishonest “man-made” Climate Change narrative is part of global and national corruption to justify endless and rising oil/carbon taxes, renewables subsidies, climate loans, climate bureaucracies, and junkets.


We need more energy security to sustain fast economic growth and job creation. Cheap, stable and reliable energy that is dispatchable on demand, requires less land per MW of power generation. It is not dependent on the weather and requiring huge tracts of land that can otherwise be used for more food production and forest protection.
----------------

Posted by Bienvenido Oplas Jr at 9:56 AM