Last week, November 19, I was surprised to read this from NTZ,

The latest free speech suppression and intimidation has unfolded in Munich: The 13th International Climate and Energy Conference, sponsored by the European Institute for Climate and Energy (EIKE) and CFACT, has seen its contractual agreement torn up, and the event was booted out of the conference facility at the last minute.

Pressured by “left-green mob”
According to EIKE spokesman, Prof. Horst-Joachim Lüdecke, “a left-green mob” pressured the hotel management of the NH Congress Center in Munich(Aschheim) “to illegally cancel the accommodation contract”. 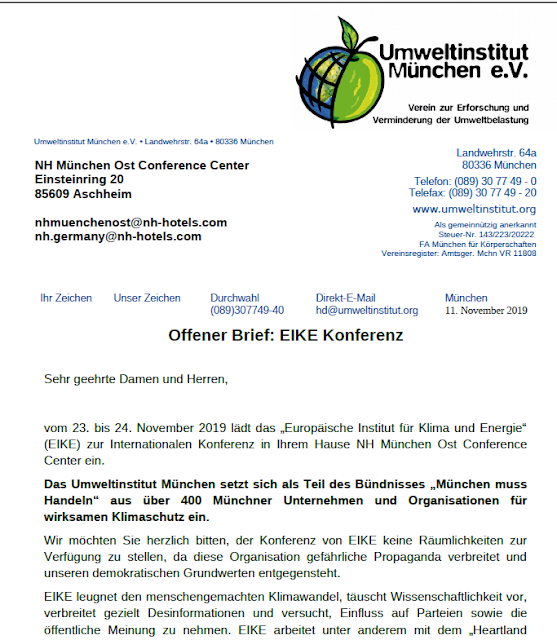 EIKE had gone to court and demanded revocation of the termination in an emergency motion. However, today, a Bavarian court ruled in favor of the NF Conference Center, citing “security reasons”. German law is no longer able to protect...

The story was reposted in WUWT same day,
https://wattsupwiththat.com/2019/11/19/thugs-bully-munich-conference-center-force-cancellation-skeptic-climate-conference/.

More than 200 people, including dozens of scientists, are in hiding right now in Germany. I am one of them. I can tell you that I am in Munich, but I can’t tell you my hotel. I can tell you that the scientists will meet on Friday and Saturday to share scientific knowledge, but I can’t tell you where. The meeting, in which scientists will present evidence contradicting an asserted climate crisis, was scheduled to be open to the public, but fascist climate thugs have forced us into hiding. The German government, rather than protecting scientists and free speech, has explicitly refused to protect scientists from the threat of violence….

It was reposted in WUWT after two days,
https://wattsupwiththat.com/2019/11/24/climate-scientists-reduced-to-hiding-from-climate-thuggery-in-germany/.


My satisfaction over these successful lectures was short-lived. I found out late yesterday that the organizers of the Munich conference had had their venue cancelled at the last minute due to intimidation by activists from a group called the ‘Anti-Capitalist Climate Society.‘ Apparently, a crowd of about 20 thugs staged a flash mob at the hotel booked to host the EIKE meeting and threatened further havoc and disruption to guests if the conference was allowed to go ahead.

Shamefully, it appears that either the hotel did not bother to call police or the police did nothing about the activists’ threats. Why not? The hotel now claims the safety of their guests are their first priority. However, the increased risk to the safety of these guests was coming from the protestors, not from EIKE members and speakers. Why blame the mild-mannered scientists for being ‘controversial’ rather than the radical activists threatening hotel guests with violence?

Those environmental militants in Germany are horrible. They cannot debate in hard science, only in hard bullying and violence. Here's the latest proof that many if not all climate alarmists cannot debate face to face with real climate scientists -- climatologists and an astro-physicist -- when they were dared to a public debate with livestream, also last week,
https://wattsupwiththat.com/2019/11/19/climate-alarmists-hide-from-debate-stossel-sets-it-straight/.

Which Role did the Sun Play in Climate Change? What does it mean for us?
Prof. Dr. Henrik Svensmark, Centre for Sun-Climate Research des Danish National Space Centre

How much of the Climate is man-made
Dr. Sebastian Lüning, Die kalte Sonne