Among the recent good news in the Philippines in terms of improving economic competitiveness is the big jump in its global ranking in the World Bank’s Doing Business (DB) report, from No. 124 in DB 2019 to No. 95 in DB 2020 reports, a jump of 29 notches. 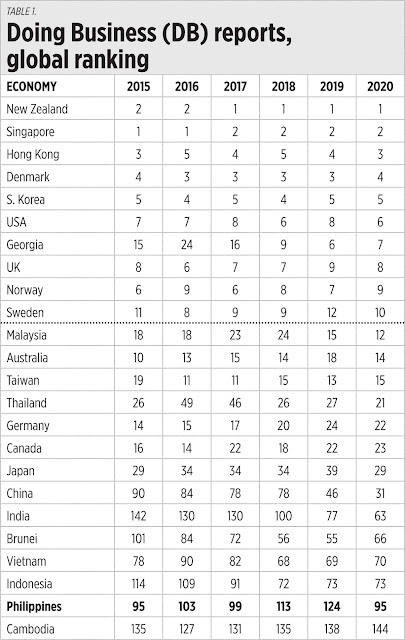 The top 10 countries were consistently there except for Georgia which crawled up from No. 24 in DB 2016 to 7th. Many Asian economies registered improvement over the past five years — Malaysia, Thailand, China (from No. 90 to No. 31) and India (from No. 142 to No. 63).

Of the 10 factors in the DB scoring, the Philippines ranks low on these: Starting a business (No. 171), Enforcing contracts (No. 152), Getting credit (No. 132), and Trading across borders (No. 113). In short, the bureaucracy. Too many permits required to start and renew a business, to get credit, and to do exports and imports, and the bureaucracy is poor or lousy at enforcing contracts.

Nonetheless, two improvement in the Philippines’ score in 2020 over 2019 came from: a.) Protecting minority investors (+16), by requiring greater disclosure of transactions with interested parties and enhancing director liability for transactions with interested parties; and, b.) Starting a business (+2), by abolishing the minimum capital requirement for domestic companies.

These gains can be reversed if the bureaucracy finds ways to penalize businesses for various populist and bleeding heart arguments. One such move is the insistence by the Department of Health (DoH) to have a second round of drug price control this year. The first round was made in 2009 when Secretary Francisco T. Duque III was the head of the DoH. Mr. Duque loves price controls and price dictatorship. He dictates who should be penalized with mandatory and obligatory price cuts and who should be exempted.

In a BusinessWorld report last week, “Price-controlled drug list headed to Palace for approval” (Nov. 1), it said “Secretary Francisco T. Duque is set to endorse an executive order (EO) that will set a Maximum Retail Drug Price (MRDP) for 122 medicines to Mr. Duterte before this week ends… The MRDP will cover treatments for the Philippines’ top 40 diseases.”

There are many factors to determine pricing of commodities, foremost of which are government taxes, national and local, and the degree of innovation and competition. The most innovative products and services tend to have higher initial prices to cover the cost of R&D while the most competitive — lots of “me too” generic products — tend to have lower prices as the high cost of innovation has been recovered. For duties and taxes, the Philippines has among the highest in the region (see Table 2). 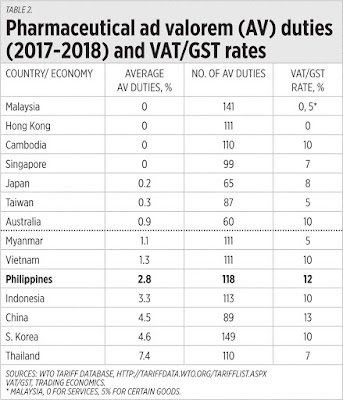 We should have more private players and investors, more competition, and less bureaucrats and bureaucracies, less regulations and taxation, bureaucracy control, and regulations control. Then we can have a higher global ranking in DB, and lower prices of many goods and services including medicines and healthcare.
---------------