After more than two years, I was able to see old friend Wan Saiful Wan Jan last October 21 at the KLIA. Me and Lorenzo Montanari of PRA were flying out of KLIA and going to Singapore that afternooon while Wan was arriving from Sabah, Malaysia. 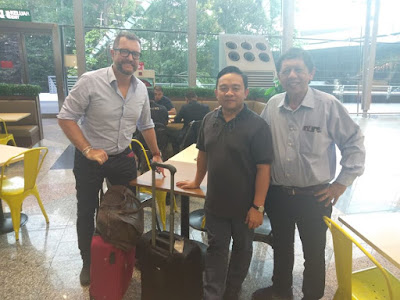 Wan is the founder of the Institute for Democracy and Economic Affairs (IDEAS), Malaysia's first free market think tank. He resigned as CEO of IDEAS around March 2018 to run for Parliament under now PM Mahathir's party. He lost but after a few months, he was appointed by PM Mahathir to head the government's student loan body, one of the problematic agencies in Malaysia. One of my Malaysian friends not affiliated with IDEAS said that if Wan won in the May 2018 elections, he could have been appointed as Education Minister.

The last time I saw Wan was September 16, 2017 in NYC. We attended an IPR-related roundtable that day. In the evening, our old friend Cathy Windels (leftmost in the photo) treated us to dinner. Here at the rooftop of the Yale Club. Beside Cathy is Barbara Kolm, head of the Hayek Institute in Austria. 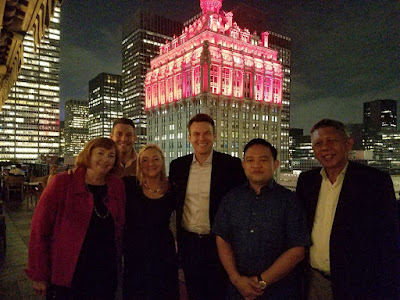 Thanks again for that wonderful evening, Cathy.
And good to catch you up, Wan.
Posted by Bienvenido Oplas Jr at 11:00 PM