Farmers and tractors protest vs EU climate and env policies

“An estimated 10,000 Dutch farmers planned the protest to The Hague, to challenge plans to cut back on livestock farming, so that the country can comply with EU laws on nitrogen emissions. One MP has suggested livestock production be halved, leading to a furious backlash from the farmers.” 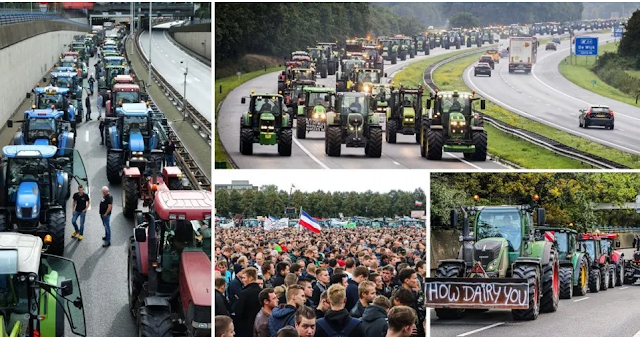 “Thousands of tractor-driving Dutch farmers stepped up protests on Wednesday against the government's climate policies, prompting authorities to block off parliament with army vehicles.
In the second national demonstration in three weeks against government plans to curb nitrogen emissions, farmers laid siege to the country's seat of power in The Hague…”

“Many farmers have said they are fed up with "farmer bashing" by environmental activists, who they say have made agricultural businesses the bogeyman in the climate debate.”

“Furious farmers say the environmental protection measures go too far and pose an existential risk to their farms.
Many are also fed up with the "farmer bashing" they say has cast them as villains in the fight against climate change.”


"WATCH: Farmers hit the streets of Dublin today in opposition to carbon taxes and rock-bottom beef prices. Many claim there is no future in farming for young people if the status quo continues."

“The two main farm unions organising the unrest blame stagnant revenues, the phasing out of certain pesticides and what they claim is unfair competition.”
Posted by Bienvenido Oplas Jr at 11:30 PM