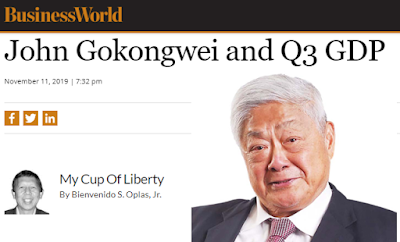 Another icon of Philippine capitalism has passed away. John Gokongwei, Jr., the founder of JG Summit with engagements in airline, telecoms, banking, food, power and real estate, had lived 93 years of a very productive entrepreneurial life.

In the Forbes’ Billionaires list 2018 and 2019, he and his children are the third richest family in the Philippines (see Table 1). 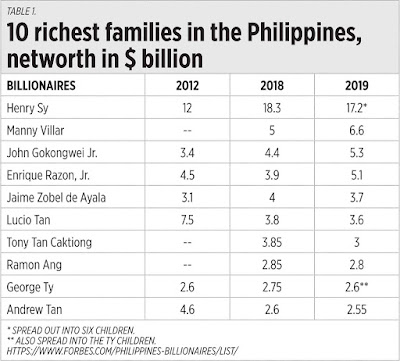 I have not met the man or his other children but I have met his eldest daughter, Robina Gokongwei-Pe, in several lectures and activities of the UP School of Economics Alumni Association (UPSEAA). In the few times that I met Robina, she was the picture of a very humble entrepreneur, often smiling and with no fanfare even in clothing and yet she heads the family’s Robinsons Retail Holdings, the country’s second largest chain of malls.

On May 24 this year, Robina gave a lecture among members of UPSEAA and among the topics she discussed were “The Ten Commandments of Running a Family Business, the Gokongwei Way.” Among such commandments are: No work no pay. No in-laws. No moonlighting. There can be only one boss. Being family is no guarantee of employment. Give the next generation wings. Wow. That is how the father, John Gokongwei, Jr., imparted to the family and corporate personnel, his wisdom in entrepreneurship.

And I have to link this story with the Philippines’ 3rd quarter (Q3) GDP growth that was released by the Philippine Statistics Authority (PSA) last week. The Philippine economy grew 6.2%, somehow good news after growing only 5.6% and 5.5% in Q1 and Q2.

I checked the components of GDP on the demand side, composed of household consumption (C) + government consumption (G) + and private investments (I). The net exports of goods and services (X-M) is not significant because they compensate for each other.

While C has recovered after low inflation rates in July-September, G also grew fast because of higher government spending. The bad news is that I shrank for the second time this year (see Table 2). 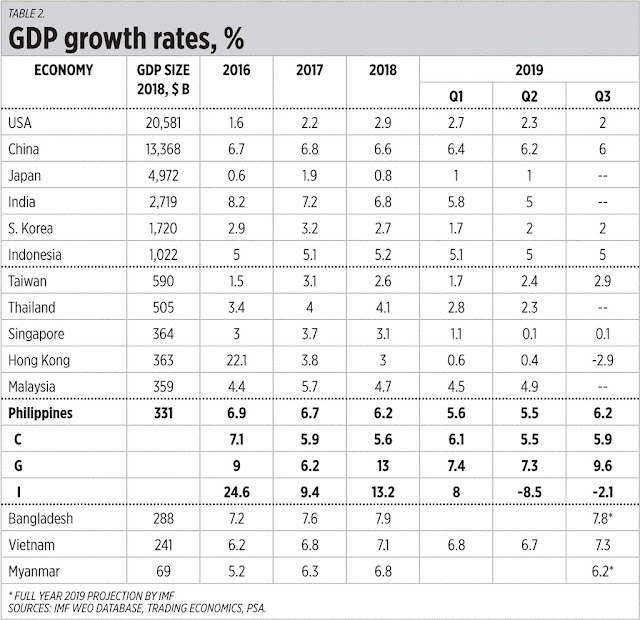 The last time the Philippines experienced two consecutive quarters of I contraction was seven years ago, in Q1-Q2 2012. I think the TRAIN 2 bill in 2017, renamed TRABAHO bill in 2018, further renamed CITIRA bill in 2019, is part of this mess as this bill plans to abolish several fiscal incentives at once while promising to cut corporate income tax over 10 years.

Dutertenomics should bear in mind always that private investors and entrepreneurs like the Gokongwei family are the real heroes of any economy because they produce value in many sectors — from fishery and agriculture to food manufacturing and banking, land and air transportation, and so on. Government should have low taxes and fewer regulations, not introduce new sources of business uncertainty.

Meanwhile, I want to congratulate the Foundation for Economic Freedom (FEF) for winning the Templeton Freedom Prize Award given by the Atlas Network on Nov. 7 in New York City. FEF’s work on helping legislate the agriculture free patent law — giving formal property rights to farmer beneficiaries — was greatly recognized.
-----------------