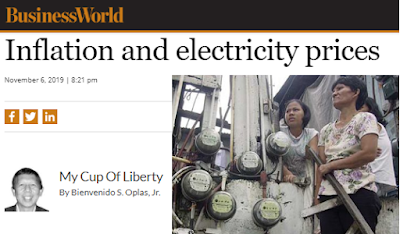 The good news about Philippines inflation is that we have declining rates, only 0.9% in September and 0.8% in October 2019. The bad news is that after being the inflation valedictorian in 2018, taking the gold medal at 5.2% (silver was Vietnam, bronze Indonesia), the country still has the third highest inflation rate year to date (ytd), January to September/October 2019 (see Table 1). 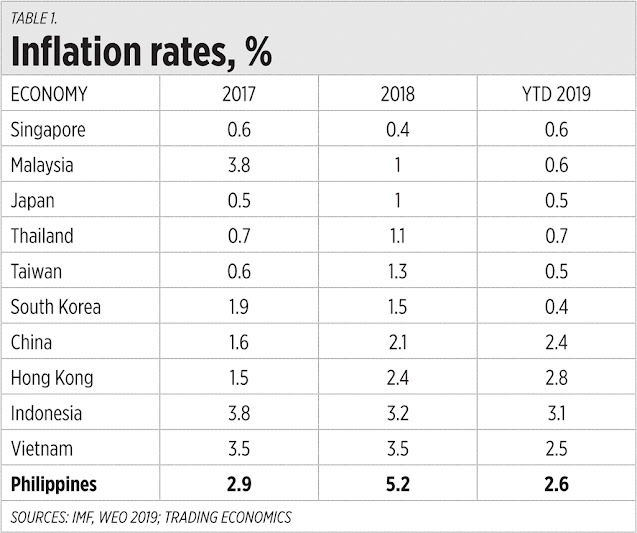 The main culprit is the “expensive energy is beautiful” policy under the TRAIN law, with the oil excise tax rising yearly from 2018-2020, total of P6/liter. Since the VAT also applies to the excise tax, the effective increase by January 2020 will be P7.20/liter. The coal excise tax also rising from P10/ton in 2017 to P150/ton by 2020.

What mitigated the continued price pressure was rice tariffication — rice and food price indices declined in recent months and hence, it is a good policy. It is the “expensive energy is beautiful” policy that is anti-poor, anti-farmer, anti-fisherfolk as farming and fishing now are becoming more mechanized and hence use lots of oil that contribute to higher agriculture and fishery productivity.

Aside from agriculture, fishery, and transportation, higher oil taxes also caused higher electricity prices in many islands, including big ones like Mindoro and Palawan, that are served only by big gensets running on diesel, from NPC-SPUG, and private generators. The people in these provinces and islands should pay P15-25/kWh in generation charge alone, but they only pay below P10/kWh and the balance is passed on to all consumers in the country via the higher universal charge in our monthly electricity bill.

That universal charge, along with eight other charges (generation, transmission, distribution, supply, system loss…) plus subsidies to renewables (FIT-All) and taxes make the Philippines’ electricity prices reach about P10/kWh, the 3rd highest in Asia after Japan and Singapore (see Table 2). 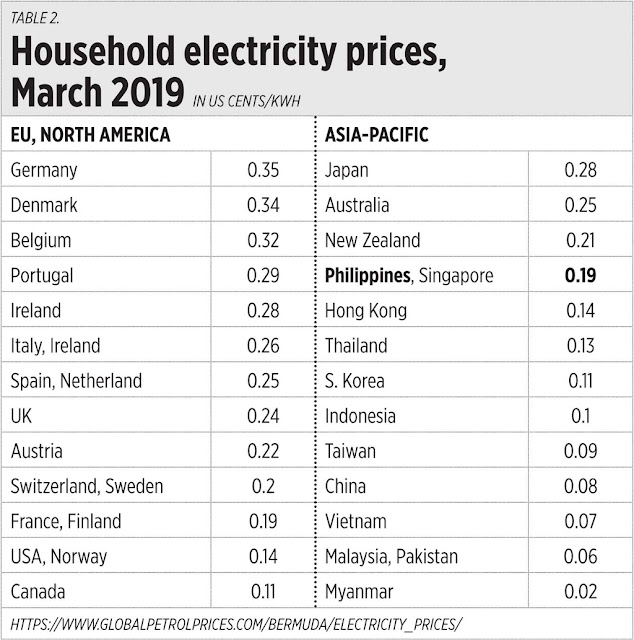 Note that countries with the highest electricity prices in the world — Germany and Denmark — are also those with the highest concentration of wind-solar, variable renewables that are intermittent, unstable, and unreliable, dependent on the weather for power supply and dependent on state subsidies to become “economically viable.”

During the ASEP-CELLs project launch at Xavier University in Cagayan de Oro City last week, Senior Technical Advisor Dr. Josef Yap showed data on comparative electricity prices among eight Asian countries from 2010-2017. His source, EnerData, showed that the Philippines has 2nd highest prices of around 18 US cents/kWh in 2017, next to Japan’s 23 cents/kWh.

Now we read reports this week of “more than 11,000 scientists worldwide warning of a climate emergency” and that the world “must replace fossil fuels with low-carbon renewables.”

This is just another alarmist paper as the UN FCCC meeting is approaching, mid-December in Madrid, Spain.

Now consider the Petition Project (www.petitionproject.org) signed by 31,487 American scientists and academics, 9,029 of whom have PhDs, explicitly declaring: “There is no convincing evidence that human release of carbon dioxide, methane or other greenhouse gases is causing or will, in the foreseeable future, cause catastrophic heating of the Earth’s atmosphere and disruption of the Earth’s climate. Moreover, there is substantial scientific evidence that increases in atmospheric carbon dioxide produce many beneficial effects upon the natural plant and animal environment of the Earth.”

More energy issues and data will be discussed in The Arangkada Philippines Project (TAPP) conference on Nov. 21 at the Marriot Hotel Manila. One of the three focus sectors to be discussed in the afternoon session is power and electricity.

We need climate and energy realism, not alarmism. We need less politics, coercion, and legislation in power generation and pricing of commodities, especially energy sources.
--------------