Among the tricks used by the anti-fossil fuel, anti-coal groups is to never recognize growth and economic modernization of countries that have relied on cheap, stable and reliable energy source. So for this paper, I scoured through actual numbers of coal consumption in million tons oil equivalent (mtoe) from 1965-2018, and GDP growth 1965-2018. Data source for the former is the BP Statistical Review of World Energy, June 2019, and for the later, the WB, World Development Indicators database, August 2019. 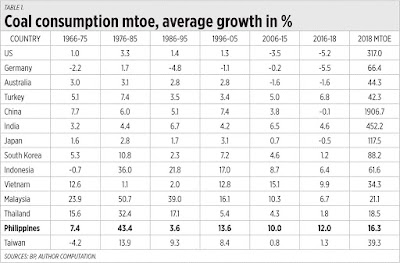 The WB’s GDP growth rates are already in percentages so I just computed the averages per 10 years. (See Table 2.) 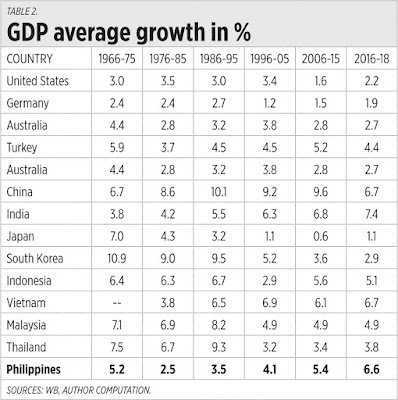 What do the numbers show?

One, there is clear correlation between growth in coal consumption and growth in GDP, for all countries above in most years indicated. See the US, Australia, and Japan — deceleration in coal use from 2006 to 2018 translated to low growth of below 3% for the US and Australia, and a maximum of 1.1% growth for Japan. For Germany, their energy transition away from coal resulted in ever-rising energy prices and slow growth, below 2% from 1996-2018.

This is not to say that coal use is the single most important factor for fast or slow growth of countries, no. There are a dozen other factors of course, but having cheap, stable and reliable electricity is one of the most important prerequisites to have high and sustained growth. No big manufacturing, banking, tourism projects will stay in a country which has frequent blackouts, or there is zero blackout but electricity prices are high due to frequent use of diesel gensets.

The climate alarmism movement is dishonest and deceptive. If there is less rain, less floods, less snow, they say it is proof of “man-made” warming/climate change/CC. If there are more rains, more floods, more snow, they say it is also proof of “man-made” warming/CC. And so we send more money (taxes, subsidies) to the UN, government and their new crony firms. Whatever weather and climate.

Climate change is true but it is cyclical and natural, largely nature-made and not man-made. To say that we need more government, more UN, and mandatory renewable energy to fight less rain and more rain, less floods and more floods, is a cheap but painful insult to our brains and pockets.
--------------