BWorld 371, Reform agenda for IPR in the ASEAN

Today, Sept. 24, a new report — “The importance of IPR (Intellectual Property Rights) in progress: reform agenda for ASEAN countries” — will be launched at Holiday Inn Makati. It will be jointly sponsored by the Geneva Network (GN, UK) and Minimal Government Thinkers (MGT). The keynote speech will be given by Department of Trade and Industry (DTI) Secretary Ramon M. Lopez, and the discussion of the report will be given by Philip Stevens, Executive Director of GN and yours truly as head of MGT.

Our report noted among others, that ASEAN countries are well-placed to move up the value-chain and become more innovative, but they need to do more, to reform their IPR systems to high global standards.

According to international comparative indices on innovation, the IP framework in Malaysia, Indonesia, Vietnam, Thailand and the Philippines is still well below global standards.

Here are the global ranking and scores of selected countries on intellectual property (IP) indices from the Global IP Center’s (GIPC) IP Index (IPI) 2019 report, and the International Property Rights Index’s (IPRI) IPR component 2018 report. GIPC is a project of the US Chamber of Commerce while IPRI is a project of the Property Rights Alliance (PRA), both are based in Washington DC, USA. 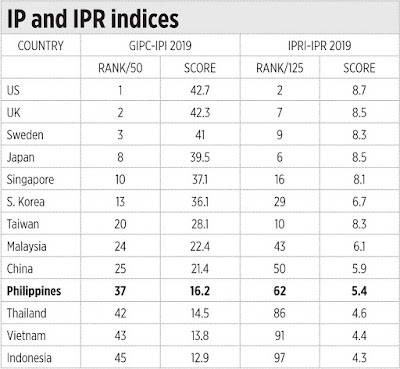 Both domestic and foreign investors want stability and predictability in the protection of their private property and investments, both physical and intellectual. Strong IPR policies and enforcement will help them develop new goods and services, knowledge-based industries characterized by high initial investments (R&D, multiple clinical trials, etc.) but low marginal costs of production, then enter into cross-border business alliances and partnerships.

There is recognition in the Philippine government about this new reality, especially from the DTI and its attached agency IPOPHL — they exert extra efforts to remedy this deficiency and help attract more foreign direct investments and help start-up businesses.

But it seems the DTI and IPOPHL can only do so much. Other agencies in the government are less helpful, like law enforcers that seem to play along with large-scale counterfeiters of various consumer products.

In the health sector, life science patents are becoming more difficult to obtain and there are concerns that compulsory licensing (CL) of famous, patented drugs could become more widely used. CL is partly or largely driven by envy — some companies would not spend on very expensive and risky R&D (like patients under clinical trials may suffer serious side-effects) but when the new drug molecule is later proven to be safe and effective in killing or controlling certain diseases, the lobby to issue CL becomes louder. When CL becomes a norm, the likelihood that newly invented, more powerful medicines will be launched in the Philippines will grow thin, which will also undermine the availability of generic medicines of the same molecule someday.

To promote innovation in biologic medicines, agricultural chemicals and veterinary medicines, the key IP right is not patent but regulatory data protection. The most innovative countries in these sectors have legally binding rules to protect the data for several years: the US grants 12 years of protection, EU grants 10 years; Japan and Canada eight years. The Philippines currently allows very limited protection and should bring its rules in line with international best practice.

Copyright protection is particularly important, with the creative industries set to be major growth areas. Despite the prevalence of online copyright infringement, ASEAN countries tend to lack sufficient rules and capacity for online enforcement.

To protect trademarks vs. counterfeit goods, the police, customs agencies and the judiciary need more resources and technical capacity to enforce existing laws.


The Philippines has the potential to join the ranks of the world’s leading knowledge economies. A strengthening of IPR will be necessary to achieve this. In particular: Speed up the examination of patents; do not discriminate against specific technologies in the granting of patents; restrict the use of CL of patents to true emergencies; strengthen the enforcement of copyright, particularly online; enable courts and officials to act against goods that infringe trademarks including those in transit between countries; raise awareness of the importance of trade secret protection; and provide sufficient terms of regulatory data protection for medicines, veterinary medicines and agricultural biotechnology.
-----------------

Posted by Bienvenido Oplas Jr at 9:00 AM