These are some of our exchanges on the subject in Minimal Government yahoogroups, Feb-March 2005. This chart is part of my ppt in one panel discussion in a conference in Hawaii in 2007. 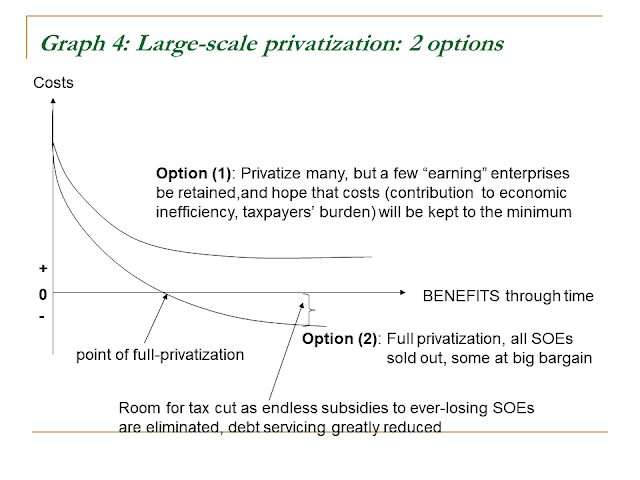 (1) Me: Is there market failure in housing? NO. Me thinks the problem in supply of housing is because of government bureaucracy -- just too many steps and regulations, too many signatures by bureaucrats, local and national, before one can put up just 1 condo building.

(2) Cynthia: My opinion - YES, there is a market failure in the housing sector.  Whether this is due to supply side (nobody wants to provide housing at the market clearing price) or demand side (who wants to buy a lot when it's easier to squat on public land and easements and hope the government gives you title to the land when there are impending elections?) or regulatory (as you say in your post- bureaucracy can sometimes hinder, rather than help, development).

Why can't government be more creative?  Why is the solution to every problem always- let's form a government agancy to take care of it, and give it an operating budget and raise taxes to provide the funds?’

(3) Marcial: On full privatization of public roads and highways. Since putting a manned toll gate in every intersecting private road with a privatized EDSA looks ridiculous, how does a private road corporation/cooperative finance itself?

1.      Vehicles with electronic chips. An electronic tracker monitors the mileage and route usage of every 'chipped' vehicle in the streets. Possible even in today's technology. The vehicle owner's usage will be charged directly from his bank account. Since a man with a car is not necessarily a man who pays on time, use a prepaid format.

2.      Credit cars. A robotic toll gate (non-obstructing structure that looks like an entrance to a shinto shrine) detects magnetic medium pasted on the sides of a car. The car automatically 'swipes' usage info as it passes the gate.

3.      The senator's method. I call it that because it's the most doable in case we wake up tomorrow to a fully-privatized highway network: Every vehicle that registers with metro manila as its base (owner's residence or office) automatically pays a metro manila road usage charge. For vehicles entering the NCR from outside, we'll still use the lovely manned toll gates currently in place. There aren't that many main feeders to and from NCR (I can think of only 3). But unlike #1 and 2 which can do a precise charge on usage for each road, the senator's method will rely on traffic data to estimate the allocation of collections say, between the EDSA Corp and Ayala Ave. Cooperative.

4.      Marcial's method. I'll just stand at the entrance of our subdivision wearing tattered shorts and torn t-shirt, rattling a large, battered milk can. Every passing vehicle w/o a sticker is obligated to drop a few coins into the can. NOW THAT'S VERY DOABLE!

(4) Alvin: Here is another piece of good news - PNB to be privatized again!  This company has been a lot of headache to the government. Rehabilitated in the late 80's, privatized in the early 90's, yet it continues to behave like a public behemoth - thus forcing government to rescue it once again a few years back. Banking is definitely an area that government should not be involved in.  And the market definitely agrees...

(5) Cynthia: Bureaucrats pay lip service to the privatization mandate, but behind the scenes, they have to be dragged kicking and screaming to the auction block. It's really annoying, because the longer they delay, the longer us taxpayers have to subsidize their bleeding operations.
--------------