“The only purpose for which power can be rightfully exercised over any member of a civilized community, against his will, is to prevent harm to others. His own good, either physical or moral, is not a sufficient warrant.”

We are now living healthier, wealthier, and longer. This despite people’s rising consumption of sugary food and drinks, fatty food and snacks, alcohol, tobacco, and vaping products. And there seems to be a problem with the narrative that more alcohol and tobacco and its substitutes like e-cigarettes, flavored vapor products, result in more sickness and by extension, more deaths. China and Indonesia have higher smoking prevalence (SP) than the Philippines yet they have higher life expectancy than us. The United Kingdom, United States, and Japan have higher SP than Thailand yet they have longer life expectancy than the latter (see Table). 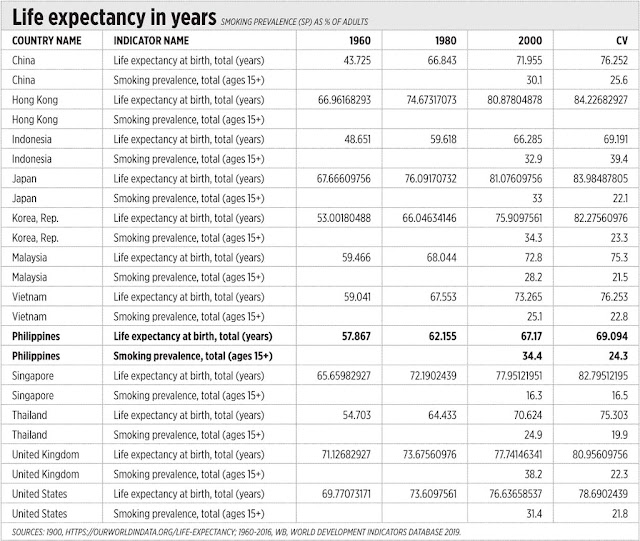 Recently President Rodrigo Duterte gave a verbal order to ban or prohibit vaping in public places nationwide and to arrest the violators. This is on top of existing law on smoking ban in public places, allowed only in some designated places.

There is little or zero debate that smoking is bad for our health — it is generally accepted. The debate has shifted to whether to have more restrictions and prohibitions against smoking, or to allow “harm reduction” via e-cigarettes and vaping products.

I do not smoke, never smoked even a single stick in my 50+ years. But I drink. I have enjoyed drinking with friends for the past four decades. I prefer the “low octane” beer with just 5% alcohol content and avoid the medium to “high octane” drinks with 20% or higher alcohol content. In a sense, beer consumption is my “harm reduction” instead of consuming hard liquor, and I can still enjoy those alcohol molecules that go through our blood stream up to the brain, which tend to relax people and evoke lots of laughter, even singing and dancing.

From what I read, most of the vapers who were hospitalized in the US recently were using tetrahydrocannabinol (THC) oil cut with Vitamin E acetate thickening agent, not standard vape juice. Vapers may not admit it because THC is the active ingredient in cannabis and is illegal in many countries. Vitamin E acetate is also not safe to inhale and has been linked to lipoid pneumonia, which can be fatal. So the culprit here may not be those ordinary water-based, some nicotine-containing, juices but the black market THC cartridges.

Instead of looking at vaping as encouraging more harm, it should be considered as reducing harm, as a “smoking cessation aid.”

Looking at prohibitions, we have lots of those laws in the Philippines — bans on prostitution, bans on certain types of gambling, bans on harmful drugs, bans on unregistered guns, bans on smuggling, bans on corruption and plunder. And we have all of these around us.

More bans and prohibitions only encourage more corruption. More regulations and taxation further encourage more smuggling, the result of which is that more smoking, drugs, and drinking happen because the smuggled products are cheaper.

With these ever-rising bans and controls by the state, soon we will have sugar control, salt control, chocolates control. Not good.
-----------------