For many years now there have been sustained attacks against coal power in the country and the world. Then, in recent months, these attacks targeted new and proposed 3,000+ MW coal power contracts by Meralco, the biggest electricity distributor in the Philippines.

Last week, it became an even more focused attack on Meralco by using its Power Purchase Agreement (PPA) with the coal plant Quezon Power Phils. Ltd. Co. (QPPL). The attacks came from the Bayan Muna (BM, which I sometimes call Bayaan Mo Na) Party-list in Congress.

Among the accusations they hauled against Meralco-QPPL are: 1.) overcharging of P2.53/kwh or P4B from January to September 2020; 2.) implying that the PPA is recent and not approved by the Energy Regulatory Commission (ERC); and, 3.) that Meralco is self-dealing and getting its power supply from the gencos it controls. QPPL owner Electricity Generating Public Co. Ltd. (EGCO) of Thailand is a partner of Meralco in San Buenaventura Power Ltd. Co. (SBPLC), another coal plant.

I got interested in these accusations so I checked some numbers, particularly Meralco’s composite generation charge from its various power plant suppliers, using the latest data from the November 2020 billing then going backwards every six months until November 2017. Here is what I discovered.

One, the QPPL share is only about 9% of Meralco’s total power purchase. Two, while QPPL prices are generally higher than the Wholesale Electricity Spot Market (WESM) prices and overall generation charge, there are months and years where QPPL’s prices are lower, like in May 2018 and May 2019. Three, despite big oil-coal tax hikes under the Tax Reform for Acceleration and Inclusion (TRAIN) law of 2017 that pushed upwards the cost of oil-based and coal plants, the generation charge has been declining in 2019 and 2020 (see Table 1).

Meralco’s biggest PPAs are the First Gen Power Corp. (FGPC) Sta. Rita and San Lorenzo plants in Batangas. These two plants alone supply about 33% or one third of the total power purchase by Meralco.

So the BM “study” is twisted to produce two false assertions.

One, that there is overcharging because the PPA of QPPL-Meralco is a sweetheart deal — wrong. The PPA was approved by the Energy Regulatory Board (ERB), the precursor of ERC, way back in 1995 or even before the EPIRA (Electric Power Industry Reform Act) of 2001. No PPA or power supply agreement (PSA) by Meralco and all other private distribution utilities, past and present, can proceed without public hearings and ERC approval.

Two, that QPPL is an indirect affiliate of Meralco and there is self-dealing — wrong. QPPL is 100% owned by Thailand’s Electricity Generating Public Co. Ltd.

The anti-coal, pro-renewable energy lobby still denies that solar-wind is “viable” only because of huge subsidies that are passed on to the consumers. Countries with the highest electricity prices in the world — Germany and Denmark — as shown in the Strom-Report 2020, also have the highest concentration of wind and solar generation (see Table 2). 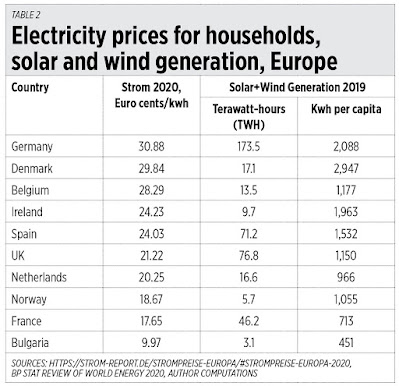 Bulgaria does not believe in solar-wind mis-promises — its power generation largely comes from coal (in 2019, 0.21 Exajoules EJ or 58.3 TWH) and nuclear (16.6 TWH). And Bulgaria has the cheapest electricity in Europe.

During the BusinessWorld Economic Forum last week, attracting more investments including those that are exiting China was among the topics discussed. It was partly mentioned by National Economic and Development Authority Secretary Karl Chua and ADB’s Philippines Country Representative Kelly Bird.

Vietnam fully understands the value of high power supply from cheap and reliable sources. When it comes to power generation, Vietnam (producing 57.9 TWH) overtook the Philippines in 2006, it overtook Malaysia in 2015 (producing 157.9 TWH), and it overtook Thailand in 2017 (producing 191.6 TWH). And in 2019, Vietnam’s coal consumption of 2.07 EJ was nearly three times that of the Philippines’ 0.73 EJ.

Many self-styled greenie and socialist-leaning organizations like BM are inconsistent in their anti-fossil fuel lobby because they only demonize coal plants, but not gas plants or even diesel plants. It seems that the game plan here is to kill only new big coal plants so that gas plants — which will soon rely on imported LNG when Malampaya gas becomes depleted — will be given priority in the PPAs and PSAs of distribution utilities.

Complementary to rising power supply capacity should be transmission system expansion. Power generation has been deregulated and demonopolized, power distribution also demonopolized via retail competition and open access (RCOA) and many competing retail electricity suppliers (RES). Power transmission remains the only national monopoly, the biggest elephant in the room and where the biggest inefficiencies are hiding.
----------------

Posted by Bienvenido Oplas Jr at 10:36 AM