The corruption in poverty, climate and virus over-spending

Poverty data from the Philippine Statistics Authority (PSA) show that in 2018, only 12.1% of PH households are poor at poverty threshold of P25,813 per person per year. 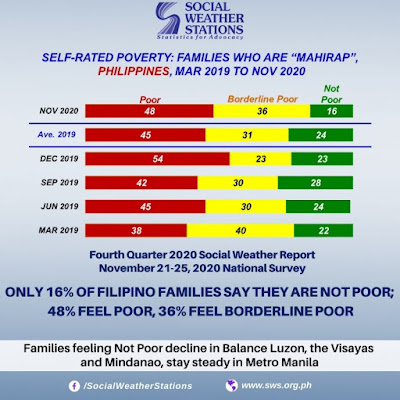 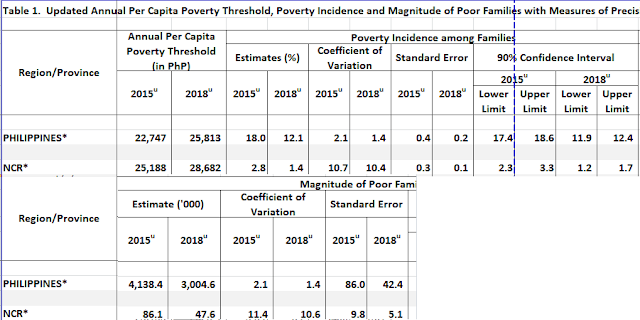 I think people compare themselves with others or their neighbors, not with how they lived 5 or 10 years ago. Until about 10-15 yrs ago, the poor ride bicycles, cows and carabaos. Now the poor ride motorcycles, e-bikes or 3rd hand cars. Before, the poor communicate via slow mail, now they communicate via FB, IG, twitter, Viber, Messenger, etc. So perhaps a case of "I feel poor because I only drive a motorcycle while my neighbor drives a 2nd hand car."

Another reason, the poor or pretending poor know that they will get many freebies with no timetable if they declare themselves as poor, don't declare their extra or higher income -- free education until university, free healthcare/Philhealth, free cash transfer, even free housing ala Kadamay, etc. When government subsidizes endlessly poverty, they will get more poverty-declaring people.

The various bureaucracies, politicians also are happy when there is high poverty. DSWD, DOH, DepEd, DILG, etc will never be able to justify their big and ever-rising budget if poverty is low.

People respond to incentives, it's shown in Econ 11. If prices are high, produces sell more so the supply curve is upward sloping. If prices are low, consumers buy more so the demand curve is downward sloping. The same way, if there are many freebies, forever subsidies with no timetable if one is poor, then many people will declare themselves as poor. And the various bureaucracies and politicians will certify them as poor. Takes two to tango.

Extending further… there is no big money in natural and “nature-made” climate change (CC) and warming. It is denied, demonized and attacked. Only “man-made” CC narrative should be entertained. Why? Because there is no money-money-money in the former, warming and cooling just alternate each other. But there is BIIIIG money in the latter. Governments imposing high oil-coal tax, carbon tax, subsidies to renewables, creating climate bureaucracies and climate meetings, spending multi-billions on climate adaptation/mitigation, etc.

And there is no big money in hastening herd immunity via focused protection of the medical frontliners, elderly, and those with existing diseases while allowing the young and healthy to go out freely. But there is BIG money in vaccine procurement and hence, the continued virus scare mongering and hysteria.