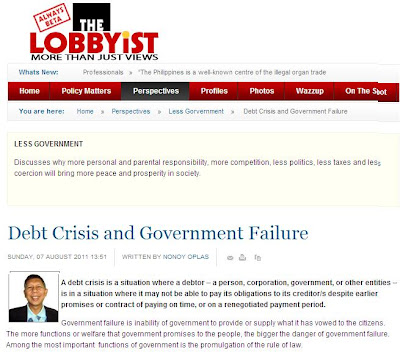 (This is my article yesterday in the lobbyist.biz with original title, Debt Crisis and Government Failure)

A debt crisis is a situation where a debtor – a person, corporation, government, or other entities – is in a situation where it may not be able to pay its obligations to its creditor/s despite earlier promises or contract of paying on time, or on a renegotiated payment period.

Now the US government got a big slap with a credit downgrade. For the first time, its AAA rating by S&P was downgraded to AA+ with a negative outlook, meaning another downgrade in the coming months and years is highly possible.

Low credit rating means lower possibility of that debtor that it can fulfill its debt contract on time and at the stipulated terms. Thus, higher risk for its creditors. So creditors will demand higher interest rate to reflect the possible danger in the future of the debt contract to be reneged or renegotiated.

I doubt that the US government, and many European governments for that matter, will realize their self-inflicted government failure, then blame market failure somehow for the mess. But the lesson is actually very clear and simple: If you live beyond your means, if you spend much higher than your income or revenue, then resort to endless borrowing to finance the funding gap, the natural resort is 100% predictable: ever higher debt.

A modest person or government would recognize the folly of such unsustainable lifestyle, and would solve such debt by cutting spending and/or raising income, not by more borrowing. A lower credit rating in fact should be a good opportunity, a good rationale, for the heavily indebted person or government, to cut its less important spending as there is higher penalty for more borrowing.

The US government has trillions of $ of assets and properties to sell if they really wish to solve that endless debt problem. Privatization of some of those assets is a good solution as the government can continue many of its projects and welfare programs, pay many of its debts and soon reduce the interest payment burden, without resorting to more taxation of the citizens.

But for many governments, rich and poor alike, more borrowing, even more taxation, is the usual solution. Today’s politicians who get today’s borrowings will not be around when those debts will fall due in the future. This is one moral hazards problem in government that largely explains why the debt problem tends to worsen rather than mitigate.

In short, hypocrisy is much larger than sincerity.
-------