High expectations, high disappointment. Much like high risks, high returns. Many welfare and nanny states build high expectations among their people, especially the youth. When such expectations are not met, or if the expectations are higher than what the state can provide, the discontented turn to political riots, attacking the police and government properties. Later degenerating into smashing shops and cars, vandalizing, stealing and looting, and arson. 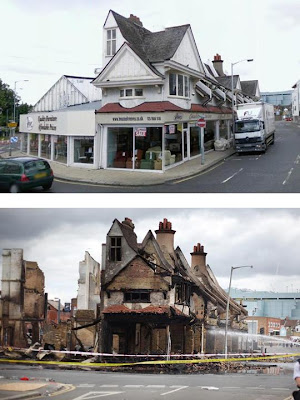 That I think, is what is happening in London and nearby cities of UK now. The same thing happened in the recent riots in France, Greece, a few other countries in Europe. The nanny states will be challenged -- what is the main role of government? To promulgate the rule of law (protecting private property ownership, citizens lives, individual liberty, etc.) or to expand the welfare and entitlement thinking and expectations? 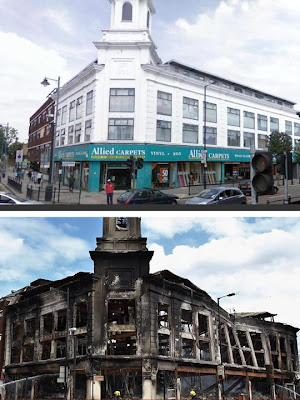 Another Before and After the riots, looting and arson, also from CNN.

BIG and nanny states are slowly digging their own graves. Too many expensive entitlements, too many social and economic expectations, too many public debts, that later on result in lots of welfare cuts. I also tend to believe that a nanny state creates more state-reliance and sometimes little self-reliance. They combine to create a politically rebellious, even economically envious mood, among many people in the lower income groups. 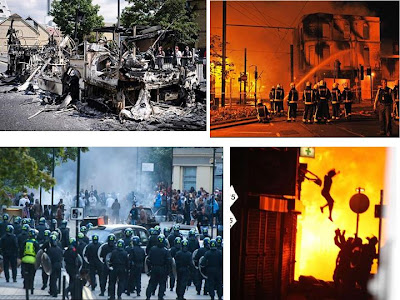 A friend, Bruce Hall, has a different take on this issue. Bruce says

People riot because it's fun. Some young men like to break things, beat people up, steal. It's part of human nature. It has always been with us and it will always be with us. The state did not create human nature. The state cannot manipulate human nature. The state is as much a slave to human nature as the rest of society. Why do people riot when their sports teams win? See Canada -- of all places, Vancouver: Riots after Canucks' Stanley Cup defeat. Because to destroy things can be fun -- hotel rooms, mailboxes, the stuff on Mythbusters, video games, and yes stores in a riot zone, be it in London, at a WTO gathering, or after your favorite sports team wins.

There are elements of outrage in some, but not all riots. That is undeniable. Equally undeniable, but rarely mentioned, is that rioting seems to be built into human nature, i.e. there is something fun about destroying stuff. It has been going on for centuries long before any modern state, welfare or otherwise. 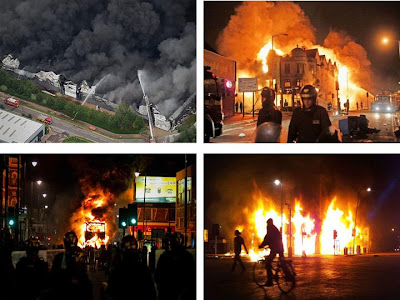 These pictures from cnbc.com.

Good points by Bruce, I thanked him for that. I mentioned above the role of government in promulgating the rule of law, to tell people to respect private property, whether they are angry at welfare cuts or their soccer team lost or they are simply drunk and high on drugs or whatever. Respect private property ownership, do not steal, do not loot, do not break into others' houses and shops. This important role of the state has been compromised as the state has expanded so big and wide into subsidizing and taxing and regulating so many aspects of the people's lives.

Who are these rioters? 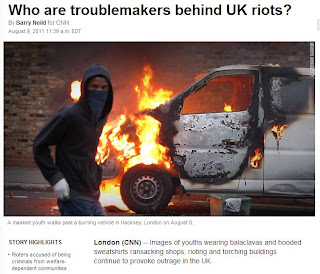 Here's one article to answer that question, Who are troublemakers behind UK riots? by Barry Neild, August 9, 2011. The author is saying that the rioters are mostly young men from lower income groups, but those who were involved in looting included young women and middle-aged men.

Looting and stealing are non-political activities. They are simply criminal activities riding on political discontent and hence, are clearly opportunism.

Do we see this kind of behavior among Filipino, or other Asian, youth and poor? None so far. Filipino youth and activists can get angry and emotional too, like when their favorite basketball team (La Salle - Ateneo rivalry in UAAP, commercial teams in the PBA, etc.) loses, or when they rally against a corrupt government. But they don't riot and smash shops and loot things from there. There is some respect in private property ownership. Those who loot and steal are plain criminals and thieves. The Philippine state has become inefficiencient in running after these criminals as the state is busy with so many other issues, like operating gambling (PCSO, PAGCOR, etc.) and penalizing people for driving their own cars on "coding" days. 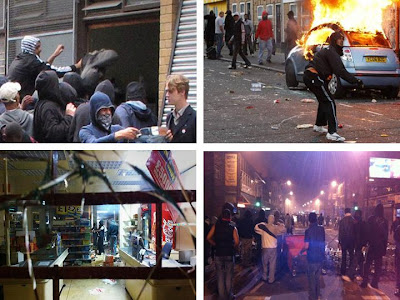 If hooligans and rioters will smash shops and loot goods there, the ones who will chase and beat them up here in Manila will not be policemen of the state, but private security guards, shop personnel and even bystanders. People maybe poor but they hate thieves as those thieves tend to victimize poorer people.

Besides, looters can get lynched and killed here, unlike in Britain and other developed countries in Europe and North America. The prospect of being mobbed to death is another reason why destruction of private properties and looting seldom or never happen here even in violent confrontation between the police and other government forces, and the street demonstrators and activists.

Massacres, like the killing of dozens of the Lapiang Malaya ng Pilipinas in the 60s, several other massacres during the Marcos regime in the 70s and 80s, and even under other administrations that succeeded him, are different from rioting. My understanding of a riot is when a group of people would go out to attack or counter-attack certain targets like the police or government officials and structures who/which are the object of their anger, then destroy and damage other properties. Like what's happening in London and neighboring UK cities these days.

Filipinos are generally peaceful. It's only politics that introduce and encourage chaos on a national scale. That is why we need less politics and less government. Politics and government is the art of coercion and deception. Hence, we need less of them.
--------