The House of Representatives of the Philippines is now on its second week of budget hearing for the 2012 budget. The public is assured of another round of fiscally irresponsible spending, of expenditures larger than revenues, then government borrows like crazy to finance the budget deficit -- this year, next year and more years to come.

My sister's auditing firm, Alas, Oplas and Co. CPAs, has a good economics and finance blog. I shall use the tables there but I will have a different interpretation of those numbers. The primary source of data is the Department of Budget and Management's Budget of Expenditures and Sources of Financing 2012.

Here are the various macro economic assumptions when the DBM, DOF, NEDA, Bangko Sentral (BSP) and other agencies prepared the budget. Note the wide range of the Peso/$ exchange rate for 2011 and 2012, from P42 to P45 to a $. They are anticipating wide swings in the exchange rate this year and the next. 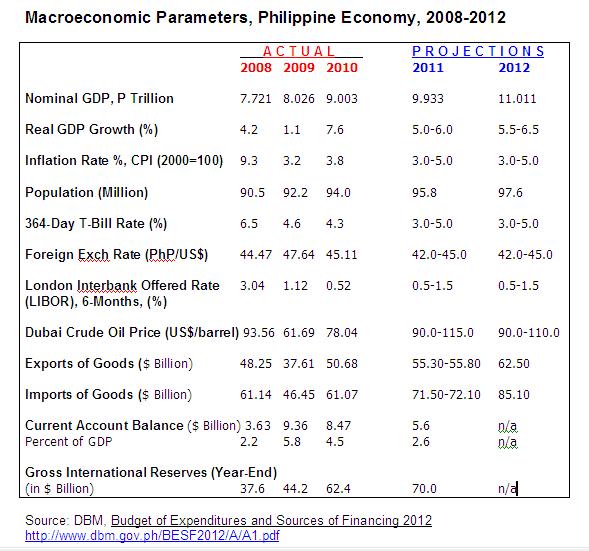 Note also the wide range in the LIBOR, from 0.5 to 1.5 percent. When they prepared the budget until late last month, the deep uncertainty in the US debt ceiling debate was still on, and the rating downgrade of US debt from AAA to AA with negative outlook, was not yet factored in. These developments plus the continuing debt crisis in a number of European economies will have upward impact on global interest rates.

Fiscal irresponsibility of the Philippine government continues. From one administration to the next, including the current one. The rise in the budget remains higher than revenues, resulting in seemingly endless budget deficit each year. 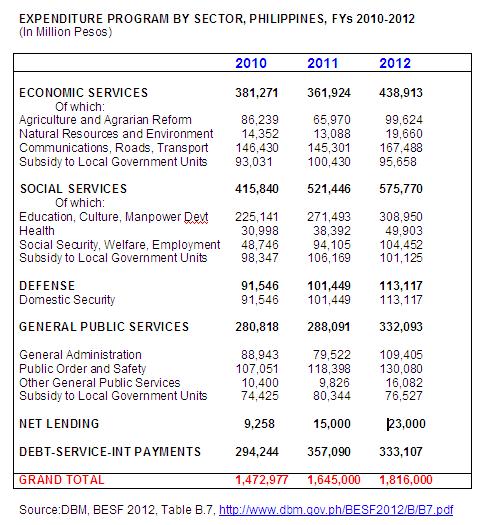 The national government's budget was P1.47 T in 2010, P1.64 T this year, and P1.82 T in 2012. The projected budget/GDP ratio should be around 16.5 percent, excluding budget by local government units (LGUs). If their combined budgets are included, this ratio may go up to around 20 percent of GDP. 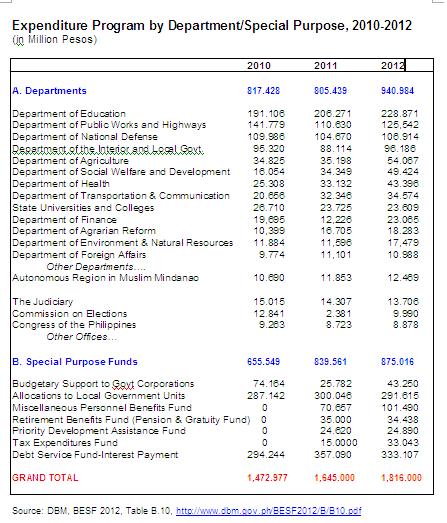 There is something suspicious in the flat or even decline in the budget of other departments and agencies outside the main Executive branch. If the total budget has increased but certain agencies suffered some spending cuts or stayed at similar level, and interest payment will have a slight decline next year, where will the money go?

There is a "magic" appearance of huge items like the “Personnel benefit funds” and “Retirement benefit funds” in the 2011 and 2012 budgets; they were zero in the 2010 budget. So a huge amount for personnel salaries, bonuses and retirement was somehow detached from regular agency budgets. Possibly to make some of them look kawawa or pitiful and hence, must not suffer budget cuts in Congress. This should be another proof that the bulk of the budget is for paying the salaries, perks and benefits of more than four million government personnel, from local to national agencies.

Here is the total debt service spending, interest payment + principal amortization, from 2010 to 2012. Note the difference in figure in interest payment this year. It should be P357 B this year, but listed only as P321.6 B in this table. I do not know the explanation for this. Perhaps a typographical error on the part of DBM, or some realignment of items.

Nonetheless, the figures show that the ratio between interest payment and principal amortization looks like 3:4 or 4:5, which is a big number for interest payment. If government borrows more each year partly to pay maturing old debts, and paying huge amount in interest, why continue with this practice? Why continue the fiscal irresponsibility? Because the politicians and government bureaucrats themselves are irresponsible?

The government's quick and shallow explanation for this would be that while the absolute amount may be big and getting bigger, but compared to GDP that is also getting bigger each year, the relative share of debt/GDP will stabilize, if not slightly declining.

I say that this is a shallow explanation because a rise in GDP, which is mainly a result of the toil and hard work of people in the economy, mostly from workers and entrepreneurs in the private sector, should not be used as justification for the government to continue its irresponsibility and stupidity in further hiking public indebtedness. Each peso, each dollar of government debt, will have to be paid by the current and future taxpayers. Many of the politicians and bureaucrats who contracted those new loans will be long retired or dead when those debts would mature and will require ever higher interest payment.

BIG governments, whether socialist or democratic/republican/nationalist/populist capitalist, are dangerous. Their main goal is to expand the state and its various coercion. A collateral damage of such continued state expansion and coercion, is the decline in individual freedom. Soon, people will pay more taxes to pay for the wastes and robbery of the past governments, and spend little for the private education, healthcare, housing, clothing, travel, etc. of their kids and family.
Posted by Bienvenido Oplas Jr at 6:53 PM

thank you so much for this one, Sir. this will help me on my report in my Public Finance subject pertaining to Philippine Expenditures. God Bless :)