Yesterday afternoon, I went to the House of Representatives to attend the public hearing of the Committee on Trade and Industry on two House Bills (HBs). One is HB No. 1228 of Reps. Diosdado Macapagal-Arroyo and Gloria Macapagal-Arroyo (former President), “An Act to Require Manufacturers or Labelers of Prescription Drugs to Report their Annual Marketing Costs” and HB No. 1386 of Rep. Ferjenel G. Biron, “An Act Establishing the Drug Price Regulatory Board to Regulate the Prices of Drugs and Medicines in the Philippines Amending for the Purpose Republic Act NO. 9502..." 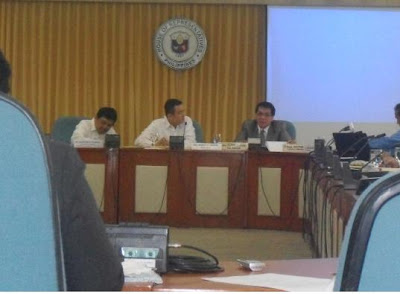 My quick position on both HBs is that they are both wrong and idiotic. But given limited time, I only prepared a position paper on Cong. Biron's bill. Below is my letter to the Committee Chairman which I personally handed to him after the hearing.
-------

We would like to submit our position paper on HB 1386 of Cong. Ferjenel Biron, “An Act Establishing the Drug Price Regulatory Board to Regulate the Prices of Drugs and Medicines in the Philippines Amending RA 9502”, below.

After two years (as of August 15, 2011) of drug price regulation or price control policy through E0 821 and the voluntary price reduction scheme, we have basis for saying that the policy is wrong for the following reasons.

1. The policy contradicted, if not defeated, the goals of the Generics Act of 1988. That law was generally successful in promoting cheaper generics, off-patent drugs to the public. The drug price control policy however, encouraged people to shift back to the branded and patented drugs by multinational pharmaceutical companies as the price of the latter have been coerced by the government to become 50 percent cheaper.

2. The policy benefited the rich and upper middle class who would be buying those drugs covered by price control whether their price remained at their high level or were forced to be 50 percent cheaper. Many if not all of the 22 drug molecules that were covered by the policy have cheaper, off-patent competing drugs already available. The poor were patronizing the off-patent drugs which are still cheaper compared to the branded drugs by the multinationals even if their prices have been slashed by half.

3. The policy has adversely affected many local generic manufacturers. If they were selling their drug brand X at P10 per tablet vs. the multinationals’ P18, the locals were making enough profit as many poorer people will be patronizing their products because of the big price differential compared with the branded drugs by the multinationals.

After the price control, the P18 becomes P9 and the local generics manufacturers now have the “more expensive” drugs. If they have enough leeway to further bring down their price to only P5 or lower without sacrificing the quality and safety of their drugs, good, and suffer a substantial profit reduction. But if they do not have enough leeway, then they will be forced to pull out their drugs rather than sell at a loss. T

4. The policy has introduced business uncertainty. Someone with a really innovative, creative and revolutionary product (a more disease-killer drug, a more cutting-edge laptop or cell phone model, etc.) might hesitate bringing that product to the country knowing that the politics of envy can hit them anytime.

5. There is already a healthy competition among generics and innovator companies as there are just very few patented drugs in the market now. Majority are off-patent and hence, are open for manufacturing by more generics companies, local or foreign.

6. Price control simply means price dictatorship. The government is dictating to the affected industry players that regardless of the cost of production and marketing, the cost of taxes and fees they must pay, those companies must sell their products at a level that was set and dictated by the government. Otherwise, these players can be declared as violators of the law and are subject to certain fines and penalties.

The proposed creation of a Drug Prices Regulation Board is also wrong for the following reasons:

1. It will add another layer of bureaucracy in the government, which will require another set of budgetary allocation each year. At P300 billion per year average budget deficit, the government should think of how to reduce if not eradicate the need for more borrowings, not add more debts. The on-going global financial turmoil is caused by heavy public debt by the governments of the US, Spain, Greece, Italy, Ireland, Portugal and a few others.

2. The DOH Advisory Council on Price Regulation, the body that deliberated the implementation and monitoring of the price control since August 15, 2009, has been transformed into the Advisory Council for Healthcare because there is general recognition by the Council members that price control did not work. Since the Council is not a permanent body, it is easy to transform itself and focus its discussions and energy in discussing the more important issue of universal healthcare, not just drugs pricing. A permanent drug regulation body will only become a white elephant in the future implementing and monitoring a bad policy.

In conclusion, we are not supporting HB 1386. Congress should instead review and reassess RA 9502 if its provisions are still practical or not, We are attaching a book, Health Choices and Responsibilities written by the undersigned. The book has discussed the experience of drug price control policy in the country more extensively.

We hope you will consider our observations. Thank you very much. 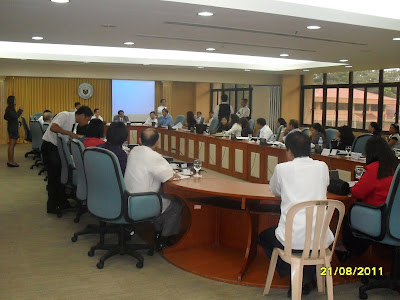 Cong. Garcia, the Committee Chairman, is young. The author of HB 1386 and Committee Vice-Chairman, Cong. Biron, is a veteran legislator. The meeting started about 1:40pm and after the opening statement of the Chairman, Cong. Biron delivered his long sponsorship speech of his bill. The first resource speakers who called were from the Department of Health (DOH) headed by Assistant Secretary Ubial. After the DOH presentation, Cong. Biron asked more questions and re-emphasized the points he already mentioned in his sponsorship speech. I think that from 1:45 to 2:45pm, it was largely a Cong. Biron monologue. The audience were treated to a "public listening" instead of public hearing. 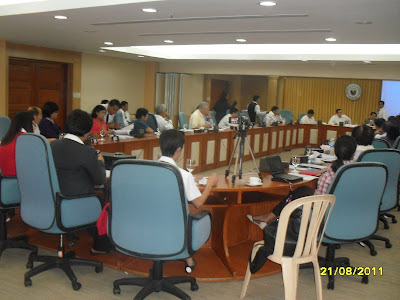 Anyway, other speakers were called and gave their position on the bill -- from FDA, IPO, DTI, PhilHealth, PHAP, PHA, Mercury, DSAP, AGAP.

I sometimes think that the DOH is a confused bureaucracy that continues to implement the drug price control policy despite overwhelming evidence that it has not attained its objective after 2 years of implementation. But when I heard Cong. Biron, I begin to appreciate the DOH. The latter has more sense saying that "there is role for market forces and competition in drug pricing", compared to certain legislators so determined to push their agenda accusing the DOH, "Is the DOH Secretary afraid to implement the law that he cannot expand the list of drugs to be put under price control?"

I was wondering why the Philippine Chamber of Pharmaceutical Industry (PCPI, federation of mostly local generic pharma companies) guys were not there yesterday. The common impression is that drug price control hits the multinational pharma and spares the local generic firms. Wrong. The policy hits both, as I discussed above in my letter. I thought that if Atty. Joey Ochave of Unilab was there, he could have silenced Cong. Biron with his more persuasive arguments why price control is wrong.

Congress is often the home of populism and heavy statism. Just create new subsidies and bureaucracies to help the poor and let Batman and Spiderman find the money to finance them.

It is important that a really liberal ideology-based political party and groups should tame such populism and statism in the legislature. Otherwise, we ordinary folks will be spending more of our time and money following idiotic laws and unfunded laws which should have never been enacted in the first place.

Finally, I personally handed Cong. Garcia a copy of my book, he was happy. He thanked me twice I think :-) I also gave the Committee Secretary, Val Palanca, a copy of the book. I hope they will read it and be persuaded that price control is price dictatorship is wrong.
Posted by Bienvenido Oplas Jr at 11:26 AM

Any update about this congressional bill? Price control is also done in other countries like India and China.