(This is my article yesterday in thelobbyist.biz with original title, Economic and humor contagion)

The economic and financial uncertainties primarily caused by public debt burden (ie, high fiscal irresponsibility) in the US and Europe is continuing. Heavy turmoil last week, extended up to this week, and most likely until the next few weeks and months. 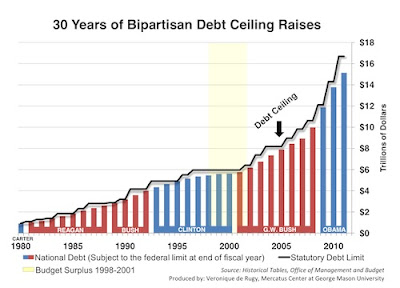 Here is another refresher how the current global financial turmoil started – on the big debate what to do with the federal debt limit.

The rise in debt ceiling has become more frequent and each rise is becoming more steep. The recent rise in debt limit for instance was $2.3 trillion, from $14.3 to $16.6 trillion. And such high debt limit is expected to be reached in less than two years. That is how fiscal irresponsibility can trigger government failure with bitter global consequences.

Some sectors have analyzed the recent and on-going financial turmoil not via graphs, jargons and equations. Instead, they turn to exaggeration with humor to depict the current and future condition of the US and global economy. Below are some of those witty comments, gathered from different sources. I have also contributed or invented 3 of them here 

How bad is the situation in the United States? It's sooo bad, that…

- My neighbor got a pre-declined credit card in the mail.
- CEOs are now playing miniature golf.
- Exxon-Mobil laid off 25 congressmen.
- I saw a Mormon with only one wife.
- If the bank returns your check marked "Insufficient Funds," you call them and ask if they meant you or them.
- McDonald's is selling the 1/4 ouncer.
- Angelina Jolie adopted a child from America.
- Parents in Beverly Hills fired their nannies and learned their children's names.
- A man had an exorcism but couldn't afford to pay for it, and they re-possessed him.
- A truckload of Americans was caught sneaking into Mexico.
- A picture is now only worth 200 words.
- The Treasure Island casino in Las Vegas is now managed by Somali pirates.
- GM and Ford are now manufacturing jeepneys and tricycles.
- Starbucks is now selling 3-in-1 coffee in sachets.
- Delta airlines now flying cheap standing only tickets.
- S&P forecast chapter for the US economy: Chapter 11.
- President Obama's economic policies will create millions of new jobs, but they are all for Iraqi and Afghani soldiers.
- The Debt Ceiling debate is a mess because Al Qaeda is trying to take credit for it.
- It’s good that gas prices have fallen because people can now afford to drive the cars they're living in.

My favorite is a quip from a friend who said that the US may need technical assistance from the Philippines on how to handle their public debt problem. I added that USAID and WB will jointly fund that project of Philippine technical assistance to the US how to (a) move from AA to BB rating, and (b) handle the debt problem while getting more new loans to save the planet, save the poor, save the economy, save the bureaucracy.

Market failure often opens up opportunities for market solutions. But government failure opens up opportunities for more government intervention, taxation and regulation. And that explains why the economic turmoil can easily jump from one big economy to another down to the smaller economies. Huge public debt and fiscal irresponsibility by the governments of those economies are the main facilitators of such contagion.
---------