Here's another reason why the Party-list system should be abolished. Cockers and cockfight gamblers think their staff are marginalized, so they should be in Congress too, to represent their marginalized staff?

The Commission on Elections (COMELEC) said that so far, 264 party-list groups are seeking accreditation. So many "marginalized" sectors and sub-sectors in Philippine society.

If there are so many marginalized sectors and groups in the country, then the geography-based (congressional district) Congressmen and women are a total failure. They have not addressed the various needs of the marginalized groups in their respective districts.

So either the district-based or party-list system should be abolished. It is not wise to keep both.
------

Then on April 03, 2010, I wrote a longer discussion about the subject.

Party-list as a Marginal Concept

It is nice to take long vacation during the Holy Week. But politics and political campaigns would always dent an otherwise peaceful vacation. Among the noisy campaigners nationwide are the party-list groups wanting to represent you and me, on top of elected national and local politicians who want to serve and represent you and me.

The Constitution created the party-list representation in the House of Representatives, because the framers of the Constitution doubted that district-based Congressmen and women will truly fulfill their work of representing the various sectors in their geographical legislative district. Thus, up to 20 percent of the House are reserved for the party-list groups to represent the “marginalized sectors”.

This philosophy is wrong. And here are the reasons why.

Farmers are not marginalized sector. Among the richest businessmen and women in the country and elsewhere also consider themselves as “part-time farmers” while others are full-time agri-businessmen. Senior citizens are not a marginalized sector. At least one past President of the country was already a senior citizen when he was elected. Indigenous people are not marginalized sectors. Among the most powerful local government leaders (Governors and Mayors) are from indigenous groups who wield political and administrative power over the non-indigenous people who are living in their localities.

There are rich and poor men, women and youth, successful and unlucky workers and farmers, powerful and marginalized senior citizens and indigenous people. The concept of a “marginalized sector” is simply wrong.

Two, party-list system has corrupted the consciousness of many private individuals. We often complain of "too much politics" in our lives, and now we have more private individuals, not belonging to big and traditional political parties, who suddenly become instant national politicians. There are more aspiring politicians now, more welfarists. Instead of more people saying "less politics, less taxes", we now have more people saying "more politics, retain or raise taxes, more subsidies.”

As practiced too, every election period, more and more groups are applying for accreditation as a party-list representing sometimes contrived sector as marginalized. For instance, the group of cockfighters, showbiz and media people, religious groups, electric cooperatives, regional dialects, and so on. In the 2007 elections, about 200 groups applied for accreditation, 93 were accredited. This coming May 2010 elections, more than 350 applied, 187 groups were finally accredited. The increasing number of groups applying and accredited for party-list, does this imply increasing irrelevance of the current and past legislators who failed to improve the lot of so many marginalized individuals in the country?

Because of the stiff competition among party list groups, many of them have acronyms that start with letter A, even AA, to attract voters’ early attention as the party-list are arranged alphabetically and voters have to choose only 1 out of 187. Somehow there is opportunism here. The groups abandoned the first letter of the "marginalized sectors" they want to represent; ie., not W for workers or women, not Y for youth, not S for senior citizens, not I for indigenous people, etc.

Three, the party-list system expands the already bloated bureaucracy in the legislature that necessarily needs to be sustained by more taxes and fees from private citizens. Perhaps this explains why none of those party-list groups and representatives in all congress since their creation in the 1987 constitution, ever advocated the slashing of taxes, if not the abolition of certain taxes. 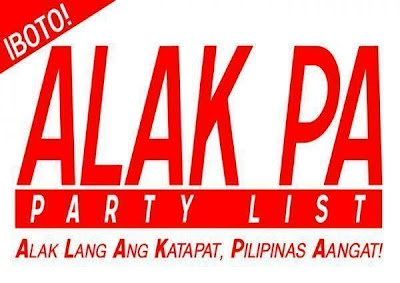 What many party-list groups and their nominees or reps are after, among others, is a slice in the big pie of the annual budget that congress appropriates to various government agencies and bureaucracies. They want their own pie to distribute as goodies to their political supporters. Plus the usual power to create or expand existing national government agencies and bureaucracies, the power to grant or disallow, franchises to certain private businesses, and so on.

A friend asked me once, “will you still vote for a party-list?” The temptation is there. Out of 187 accredited groups, there should be at least one that represents the less government, more individual responsibility group. So far, I have not heard or read such group yet. And to simply stick to my belief that the party-list system is wrong in both theory and practice, I will not vote for any. 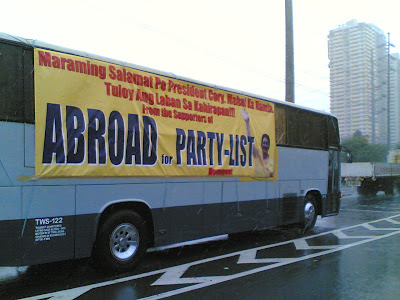 An example of an opportunist party-list, ABROAD. Joining the funeral of former President Cory Aquino last August 5, 2009, or 9 months before the May 2010 elections.

Today, August 4, 2011, I affirm my earlier arguments above and reiterate that the Party-list system is a mistake, it has encouraged not political maturity but political opportunism and corruption. It has created more hypocrisy than sincerity in public discourses on economic development.

The party-list system therefore, should be abolished. In the next round of Constitutional amendment.

I wish to defend this position in a public debate. So if you know of any group, institute or NGO that organizes a forum on this subject, I wish to participate.
--------

It looks to me that it's not the parties that are the problem. The more the merrier as far as I'm concerned. But it's the so-called "free government money" that attracts all those looking for that free money.

Yes Todd, those party-list groups are mainly after the money associated with being a Congressman/woman. Regular budget as representative (Cong. salary, staff salaries, allowances, travels, etc.) should be several million pesos per year, plus PDAF or pork barrel of at least P70 million/year/Congressman, plus opportunities for bribes (like being silent on further investigation of a President facing impeachment, a utility firm asking for renewal of their franchise, etc.).

No, such "free" taxpayers' money cannot be eliminated. They are part of the goodies given to legislators.

If the style is to name a party list by starting with A or AA, why not reverse the order every election. In 2013, the party lists in the ballot should appear as such that those that begin with Z appear first. Then on 2016, it should also include numbers 0-9 before listing the A and AA. If the ballot order is being reversed every election cycle, it would give those party lists (I hope) a hard time in getting registered and/or renewed.

Thanks LibGeek710. If you do that, COMELEC will get 1,000 or 5,000 party list groups wanting accreditation. Half of them will start with A or AA or 1, the other half will start with Z, ZZ, or 9. And Comelec Commissioners will be scratching their heads and balls what to do with this big rise of opportunist groups. That system therefore, will not solve the opportunism and parasitism opened up by the party-list system, it will even encourage it.

Great tips, many thanks for sharing. I have printed and will stick on the wall! I like this blog. All party list in the philippines