My first book, Health Choices and Responsibilities, 230 pages, published last January this year, simply argued that to attain good health outcome, there are various choices that individuals and societal leaders (private companies, government, NGOs, etc.) can choose. And there are responsibilities -- individual, parental, corporate, government -- attached to those choices.

I am happy that some friends have written a review of my book. Like Froilan Bersamina who owns The Vincenton Post. 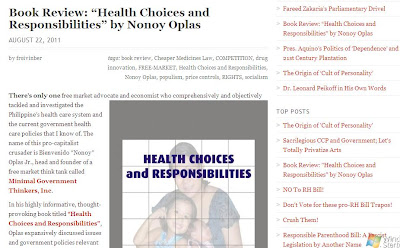 Froilan is probably the most articulate or the most prolific Filipino follower of Objectivism philosophy of Ayn Rand. In his blog post today Book Review: “Health Choices and Responsibilities” by Nonoy Oplas, Froilan wrote:

...Oplas discussed in detail the following issues: the Department of Health (DOH) Advisory Council on price regulation, discount cards versus discounted competition, the need to protect intellectual property rights, health politics, price controls, the impact of innovation and competition on drug prices and drug quality, the issue of rights and responsibilities, government intervention and regulations, the hypocrisy and intellectual bankruptcy of the left and pro-government control of the pharmaceutical and health care industry, health insurance monopoly, and the role of free market in drug innovation, competition, and drug quality and prices.

In the words of Oplas, the government’s anti-business health care policies and drug price controls were motivated by socialism or populism. This means that the country’s mediocre, populist health care system is the ultimate result of our politicians’ intellectual bankruptcy— or their failure to understand the indisputable link between freedom and economic success. 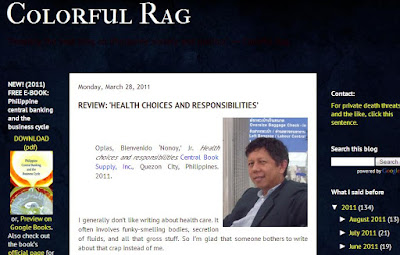 ... Oplas tells some depressing stuff about the present health care situation, such as of retailers getting hammered by the new rules, to the point of having to lay off workers. From one of his stories, it is shown that the government doesn’t really want free health care or free education ― what it wants is the control over these sectors, the people be damned. State monopolies and regulation are big money, and the only beneficiaries in such a system are the politicians and their cronies.

Oplas himself says that his book can be summed up in the idea that “health care is a personal and parental responsibility.” The state has to step aside for people to be empowered.

The drawback to compiling blog entries and presentations for a book, is that while there is a continuity to ideas expressed, part of the informal style of the blog or presentation is retained, which may be disorienting, especially when there are references made on events of the time, of which the present reader would not remember specifically. But this concerns merely the style of Oplas’ book, and not its substance, the latter being founded on good economics.

I feel however that Oplas does not go far enough with his thesis statement. Just as the great economist and philosopher Friedrich Hayek did, Oplas concedes to the government the responsibility to handle health epidemics and other emergencies. I am of the opinion that people have the ability to organize and coordinate just as well, or even better, than any coercive institution, hence my disagreement on this matter. 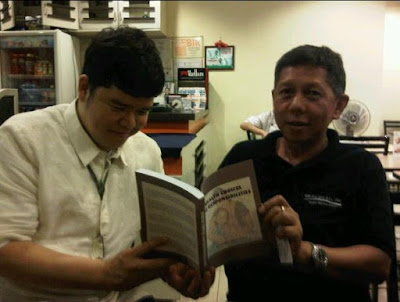 Meanwhile, another friend, Eddie Vega, a friend way back in UP Diliman and now a Consul General at the Department of Foreign Affairs (most recently in Barcelona, Spain, now back in the US, NYC). Ed does not have a blog but he made a brief discussion about my book in his facebook wall. Thanks Ed.

I hope I can finish my 2nd book on the subject sometime this year.
-----