The planet is plunging in a cooling period, yet many groups and governments, including the UN and other multilaterals call for more environmental and energy regulations to "save the planet from man-made warming and climate change."

Even more damning is the past 15 years' temperature, flat to declining, while CO2 keeps on its upward trend. To continue blaming CO2 as the cause of global warming is simply not true. Now that global temperatures are slowly declining, they also blame CO2 for causing "man-made climate change". 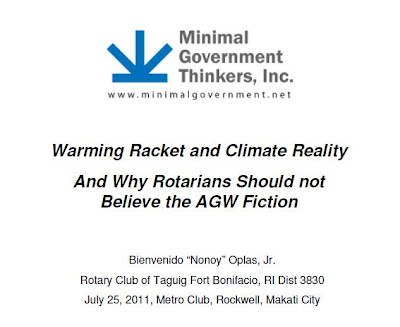 Two weeks ago, I gave a talk in my club, the Rotary Club of Taguig Fort Bonifacio. My paper was entitled Warming Racket and Climate Reality, And Why Rotarians Should not Believe the AGW Fiction. I urge readers to check that powerpoint presentation, 43 slides. I showed there many graphs, charts and satellite pictures, from air/tropospheric temperature to land surface to sea surface temperatures, the sea ice extent in both Arctic and Antarctica, and so on. 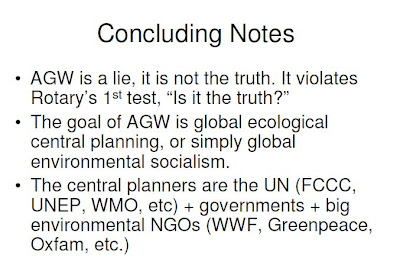 These were my concluding points. I just reiterated what I have been saying in the past.

Ok, for leaders and supporters of the big climate alarmist groups -- Greenpeace, World Wildlife Fund, Oxfam -- my challenge to you and other alarmist groups to a public debate on climate, remains open. I have been saying to a number of people that I have talked to, that ALL warming leaders in this country are cowards when challenge to a public debate on climate. I hope you can disprove me on this. 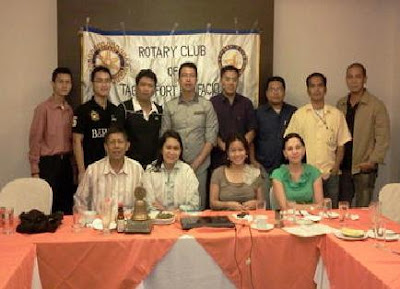 Group picture after my talk. Standing, 3rd and 4th from left, are club Past President Niel Antonio and current Club President Norlan de Leon. Beside me is my wife Ella. Beside her is Me-Ann, Norlan's wife.

On the week that I gave that talk, global cooling hit many continents and countries around the world. In South America, here is one news report, South America Gripped By Brutal Winter, July 26, 2011

In southern Peru, temperatures in the higher elevations of the Andes fell to -23°C. Since the beginning of last week 112 people have died of hypothermia and flu.

In Argentina the lowest temperatures in 10 years were measured – the temperature dropped to -14°C. At least 33 people died, some froze to death and some from poisonous gases emitted from faulty heaters.

In the tropical regions of Bolivia where temperatures rarely fall below 20°C (68°F), the temperature hovered near 0°C. At least four people died because of the cold. Two homeless persons died in Uruguay. Thousands of cattle froze in the fields in Paraguay and Brazil....

In buses, trucks, cars and homes thousands of people have been stuck in small towns or on roadsides today as heavy snowfall caused a number of major routes across the country to be closed.

And three truck drivers were marooned for hours in their overturned vehicles this morning as emergency workers attempted to plough through kilometres of snow to rescue them....

Germany over the last weeks has been gripped by unusually cool and wet weather, and so many are wondering whatever happened to summer. The forecast for the days ahead according to the English-language The Local doesn’t look good either as rain and cool with temperatures stuck in the 60s remaining the rule.... 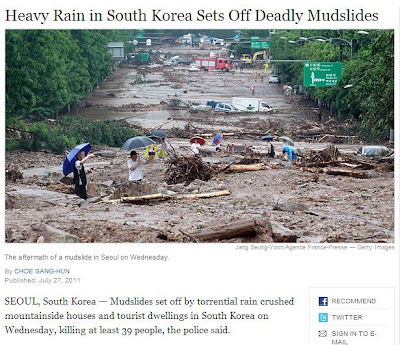 Also that week, a separate typhoon named "Juaning", the local name of a tropical storm that already has an international name, has killed around 52 people in the Philippines, mostly from drowning or landslides.

Finally, this video is cool and quite comprehensive, 16 minutes long.

The warming racket is crumbling fast as mother Earth insists that it has no fever, that it is in fact shivering at times as it enters the global cooling period.
---------