A good article here from WSJ last Wednesday. The author is arguing for a more liberal or freer immigration policy by the Japanese government because of the huge manpower requirements by the ageing population. Something like 650,000 new immigrants a year.

In Japan, Taiwan, S. Korea, other developed economies in Asia, Europe and N. America, flat or declining population is a problem while in developing economies like the Philippines, India and Indonesia, their rising population is considered by certain sectors as a big problem, big liability, instead of looking at it as a big asset. While Japan can invent more robots to run its many manufacturing plants, robots cannot smile and give "human touch" when replacing adult diapers or guiding old people to walk and stroll in a park.

Government-sponsored population control in developing countries is wrong. And government strict immigration policies that restrict if not prevent private enterprises and households to get the necessary immigrant labor they want is also wrong. If the host governments are wary about possible crimes or health opportunism by the migrant workers, then government should simply do their basic function, to enforce the rule of law. And let the local employers, companies or households, provide private health insurance for their migrant workers.

Trade in a Land Without Chhldren 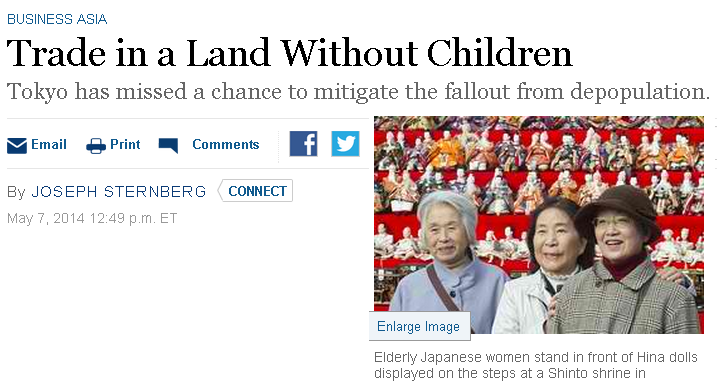 Discussions about Japan's economy generally focus on GDP growth, consumer confidence, business sentiment, unemployment, wages, investment and the like. Those are all useful markers, but if you want a clue about the country's long-term prospects, a far more significant statistic was released recently: The number of children in Japan has just declined for the 33rd straight year, and is now at its lowest level since data collection began in 1950.

Young people between birth and 15 years old constitute only 12.8% of Japan's population; in the U.S. it's closer to 20%. Those over age 65 make up more than 25% of the population, a record high. The overall population has declined for the past decade.

Neither of the two most commonly cited solutions to this problem is satisfactory. Increasing the proportion of the working-age population that is actually working, especially by boosting the shockingly low female labor-force participation rate, will help in the near term. So will raising the retirement age so that Japan's wondrously healthy elderly stay in the labor force longer.

But there's a limit to the long-term efficacy of either measure. Both women and the elderly die the same way today's cohort of working-age men eventually will. A consequence of having too few babies is that even if the labor participation rate reaches an unrealistic 100% in the future, the number of Japanese who are working will still eventually fall to below the number who are working today.

Immigration is the obvious solution, and also the one that seems to be least politically viable. Only in recent months has Prime Minister Shinzo Abe's government dared to leak word to the press that a plan to allow up to 200,000 immigrants per year may be in the works. This would more or less stem depopulation by mid-century—if Japanese can also be prevailed on to increase their birth rate to a blistering 2.07 children per woman from the current 1.39. Good luck with that.

Otherwise, Japan needs to let in around 650,000 immigrants per year to achieve the same population outcome. Good luck with that, too. One feature of Japan's population debate is how blasé the Japanese themselves sound about it. Reporters can reliably find (elderly) interview subjects to aver that life won't really be so bad. It will be less crowded, and per-capita incomes will be stable. And allowing foreigners in, the subtext goes, will make the country's famously orderly existence far too chaotic.

If this isn't making Mr. Abe nostalgic for the time not so long ago when the Trans-Pacific Partnership was a going concern, it should be. That multilateral trade deal was probably Mr. Abe's best chance to mitigate the economic consequences of Japan's demographic catastrophe in a politically palatable way, before talks stalled amid Washington malpractice and Tokyo intransigence.

In part, TPP would have done this by boosting productivity within Japan. If the population is shrinking, then the only way to sustain economic growth is to increase the productivity of each remaining worker. This is more or less how Japan achieved a modicum of economic growth from 2000-2010, since average productivity growth of 0.8% outweighed population decline of 0.3% to achieve growth of 0.6% (with rounding errors), as former central bank chief Masaaki Shirakawa noted in 2012.

By opening Japan to greater foreign competition, especially in services, TPP would have stimulated a burst of productivity gains in those corners of the economy that remain least efficient—and that also are the most likely career destinations for women and older workers, who will not be congregating around Japan's already efficient export assembly lines.

Meanwhile, most observers have overlooked an element of TPP this column highlighted last year: investment liberalization that would benefit Japanese companies in other TPP countries. Nicholas Smith of CLSA has noted that TPP would open new doors for outbound Japanese investment by clarifying intellectual-property protections, cutting back on favoritism for local champions in other markets, and facilitating the tariff-free export of goods produced by Japanese-owned factories in third countries.

In a sense, TPP would have been a form of non-immigration-reform immigration reform. If importing Malaysian or Vietnamese workers to labor in Japan is not an option, the next best thing would be to make it easier for Japanese companies to hire those workers somewhere else. Those workers would essentially support Japanese in Japan to the extent that companies could then repatriate their profits to pay wages and pensions.

Neither of these TPP benefits would have been a true substitute for the real immigration reform Japan will need to avert a total demographic collapse. But if immigration reform is not politically possible for now, Tokyo needs to do what it can. Investors will note that Tokyo is punting on what should have been one of the easier parts of a solution to Japan's most pressing long-term problem.