A very informative lecture given by Jules Maaten last Tuesday night at our Rotary Club of Taguig Fort Bonifacio, along with RC Makati Pio del Pilar. 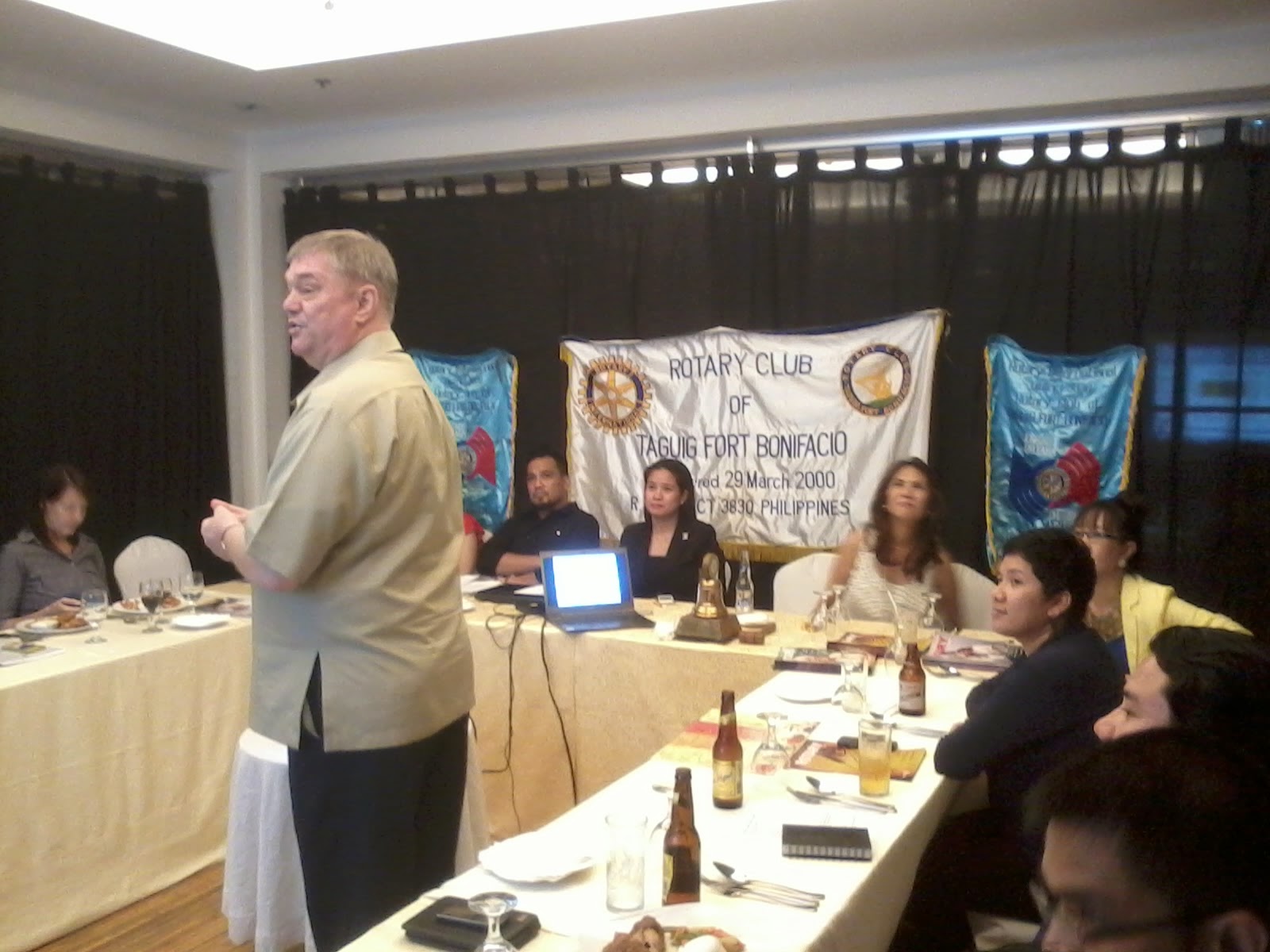 At the onset, Jules defined Liberalism as:

* It is the philosophy of liberty
* It is a philosophy of empowerment
* Origin in protecting the individual against institutions of power.

This quote from JS Mill, among the classical thinkers of liberal philosophy, is clear and direct. 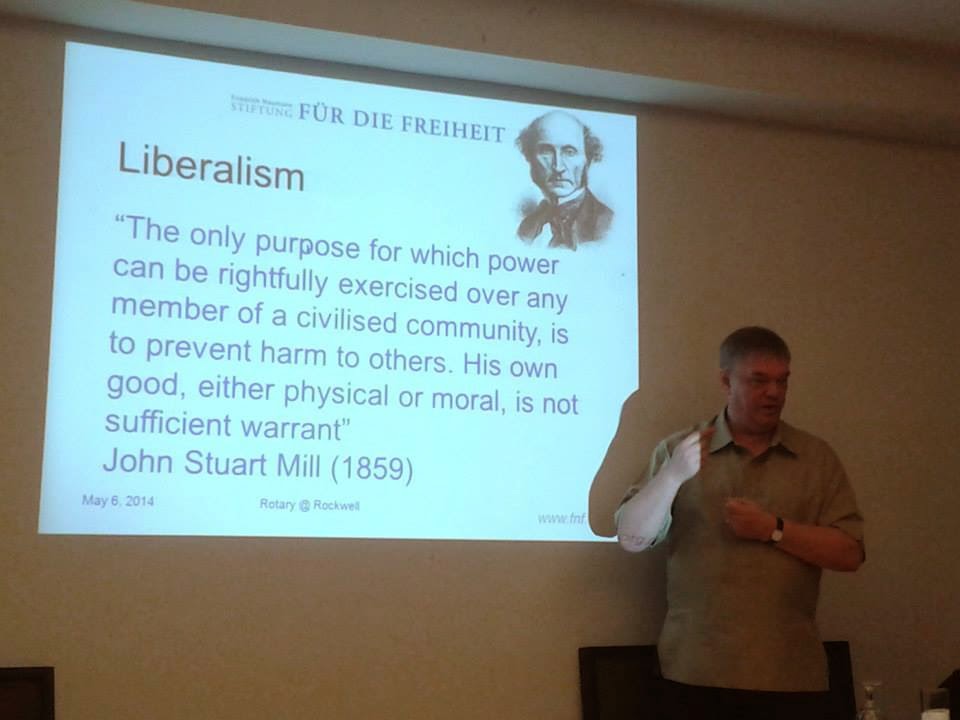 Then Jules specified how the  philosophy is applied, Liberalism in Politics:


* Protection of individual rights
* Equality of all human beings under the law
* Balance and separation of powers
* Belief in liberal representative democracy
* Balance between majority rule and the rights of the minority
* Weary of (state) authority, but state is rights guarantor
* Limitation and decentralisation of government powers
* Separation of church and state 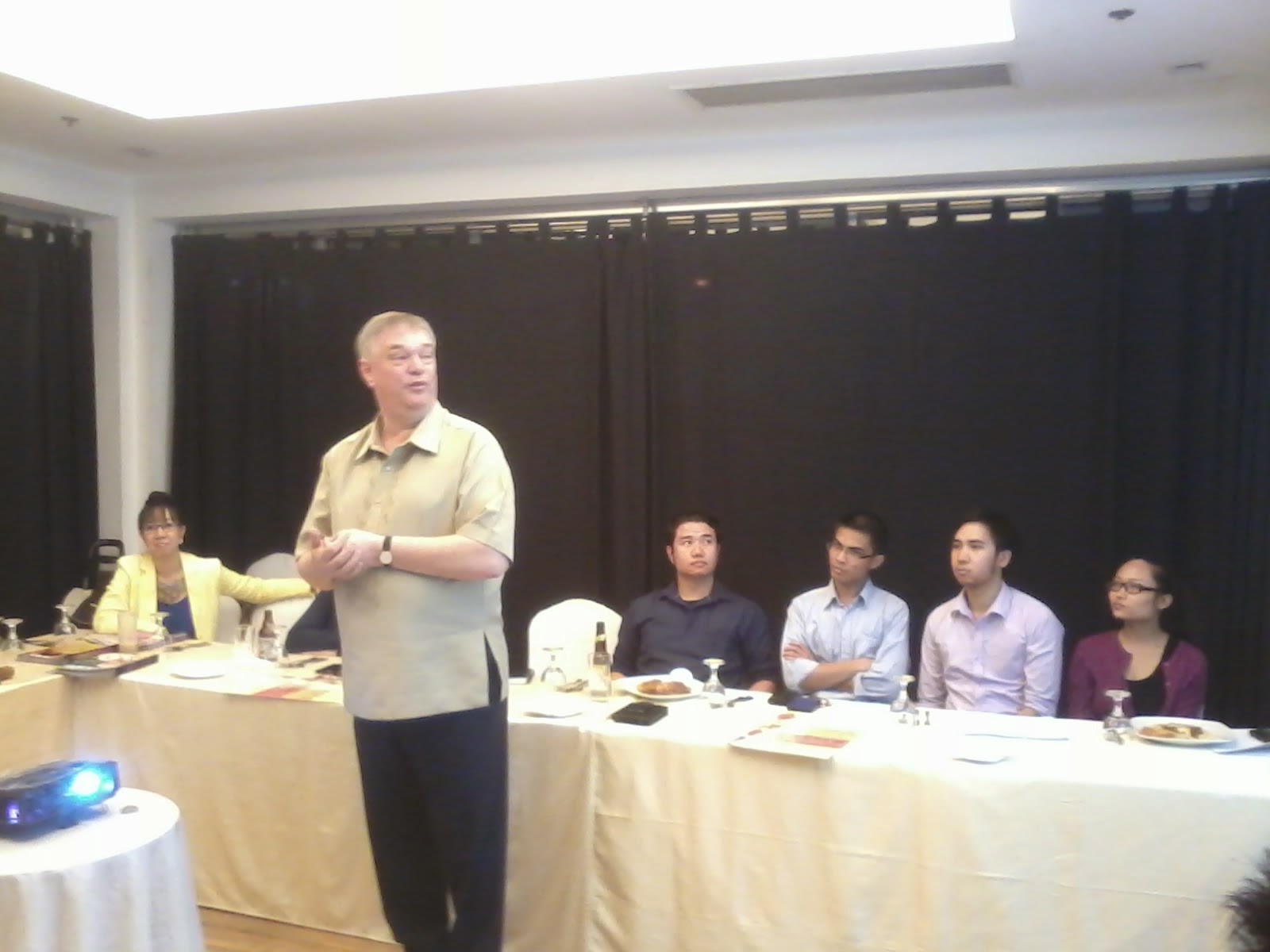 I like this quote from my favorite economist and philosopher, F. Hayek. Yes, allow people to decide things for themselves, to make mistakes, to excel. 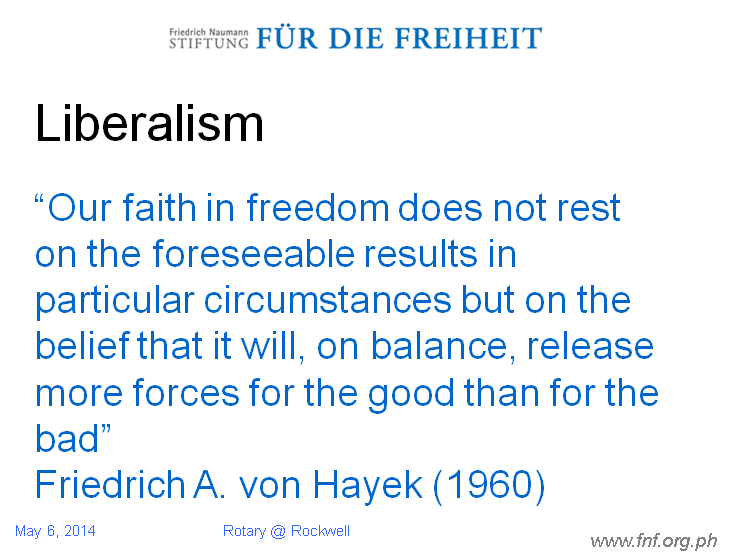 Then he discussed what is Liberalism in Economics:


* Belief in free enterprise and free markets with many players
* Protection of private property
* Support for free trade
* Privatisation of services better provided by the private sector
* Competition, no private monopolies
* Role for state where market does not function (education, environment, culture, social policies)
* Don’t leave debts to future generations.

The last item is important. As Germany and many European and rich economies go deeper and deeper in public debt, with huge interest payment annually, the economic freedom and well being of the future generation is heavily compromised. 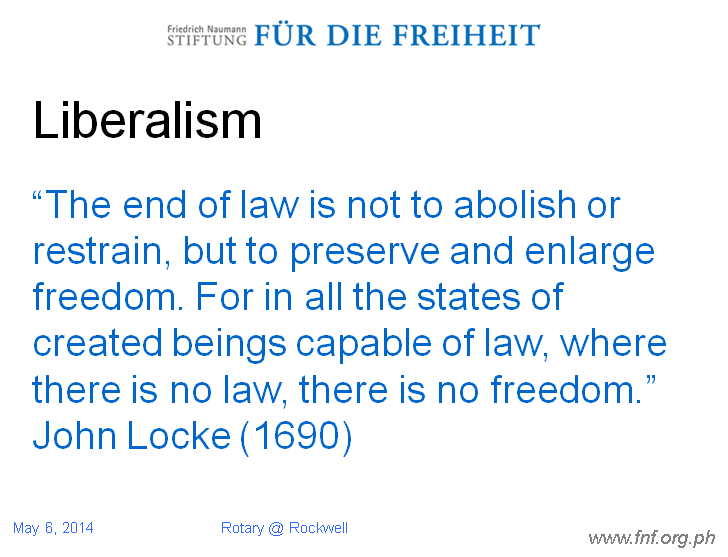 John Locke is among the classical thinkers advocating individual freedom and limiting the role and intervention power of government. 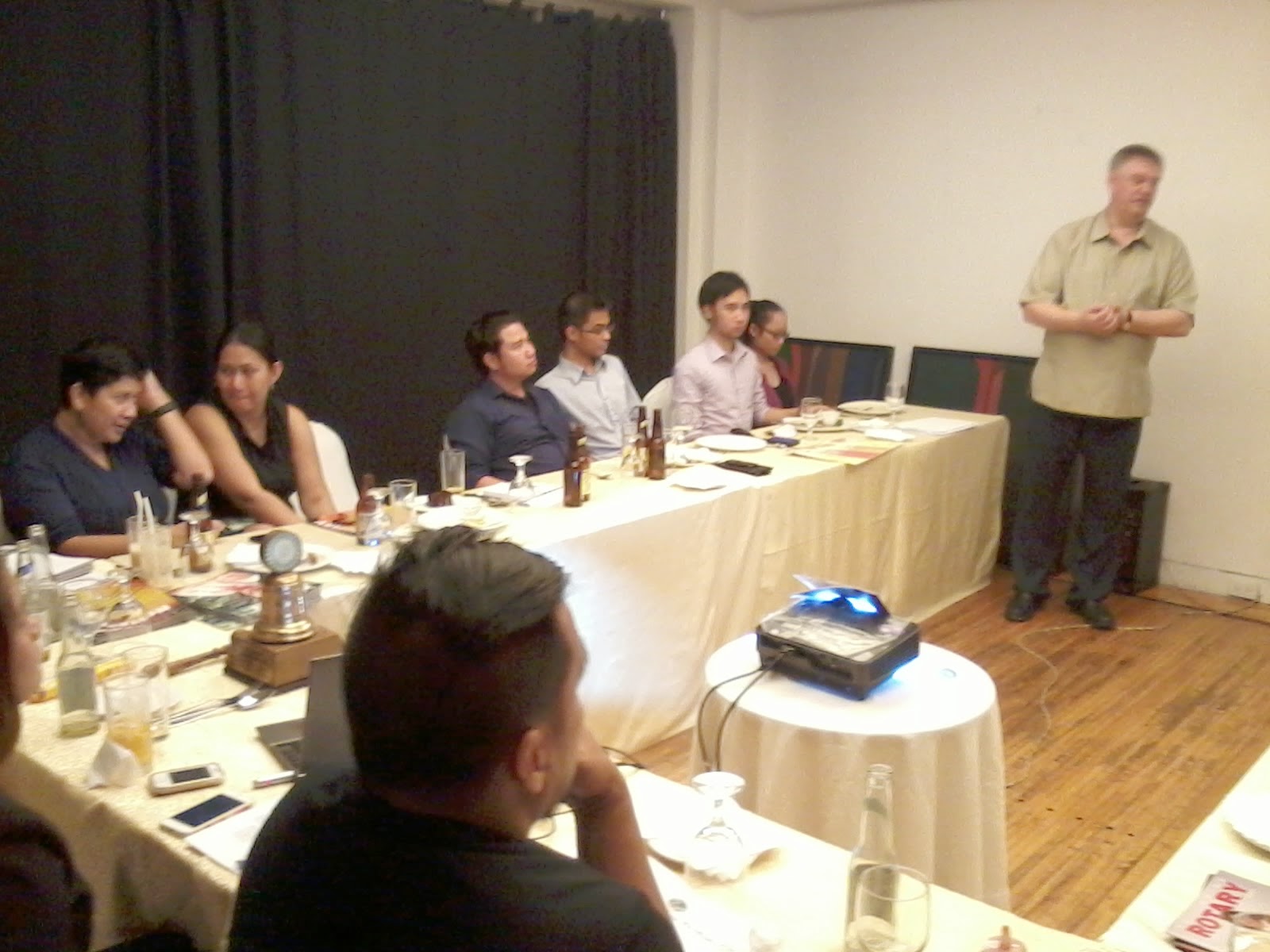 Jules discussed the broader application of Liberalism in Society:


* Protection and expansion of civil rights and liberties
* Free speech, religious freedom and freedom of association
* A free, strong and active civil society
* Personal freedom, social inclusion and tolerance
* Equal rights for everybody
* Protection of our environment and that of our children. 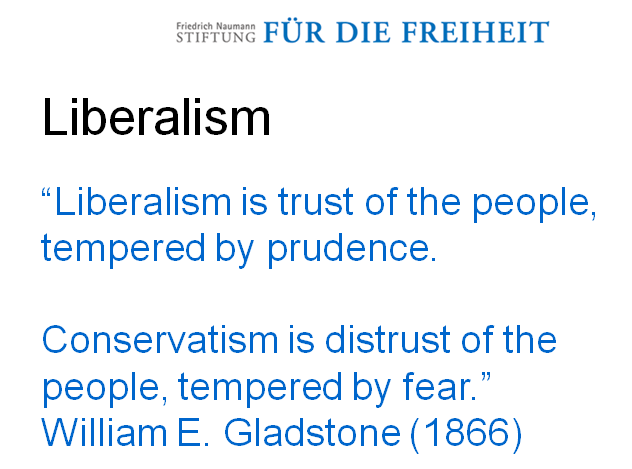 Thus, Liberalism is a Way of Life:

It's all about Freedom. Then he introduced the work of the Friedrich Naumann Foundation for Freedom (FNF) in the Philippines. Including their work in sponsoring "Freedom Run" in several cities in the country, from Metro Manila down to the Visayas and Mindanao. 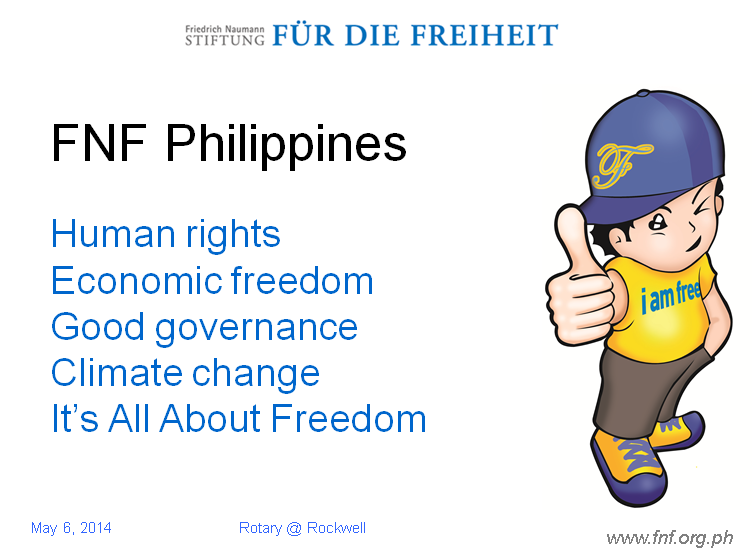 Next subject he tackled was German Politics. He said that the Merkel era (2005 to present) is a "Beacon of stability" and how the Free Democratic Party (FDP), the German political party where the FNF is affiliated, was able to partner with the Merkel government over the past few years. The 2009 election was the biggest achievement of the FDP as it got nearly 15 percent of the total votes. 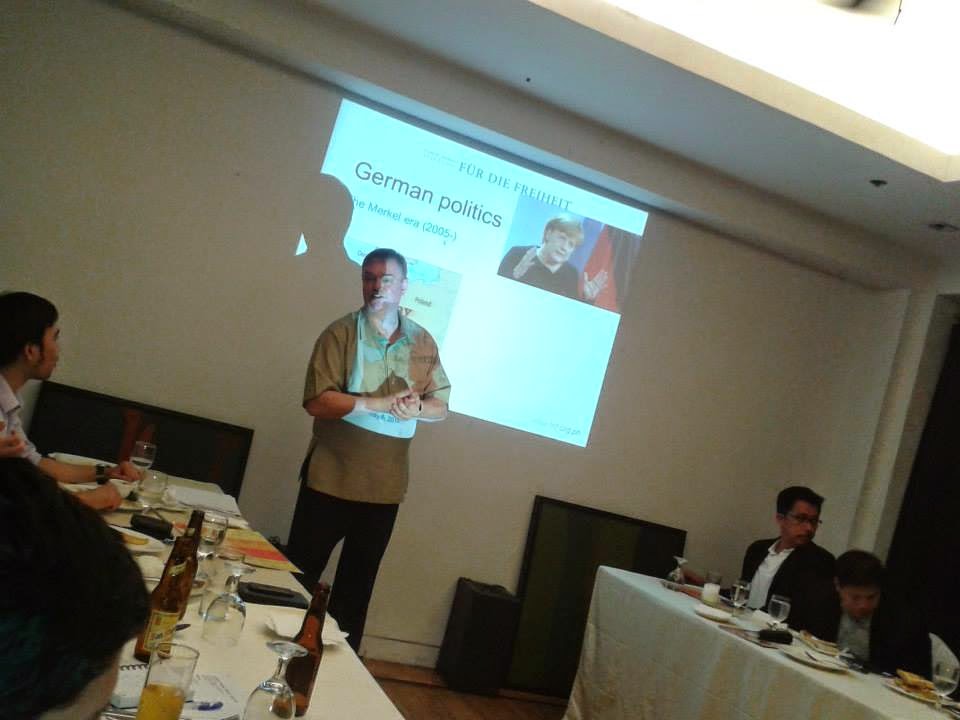 In the 2013 elections though, FDP lost, it failed to get the minimum 5 percent of total votes to have seats in the Parliament, a first since WW2. FDP is now in extra-parliamentarian opposition.

Jules broadened the discussion to include European Politics. Germany is at the centre of the most successful international project ever, the creation of the European Union: Economic, Monetary and Political union. 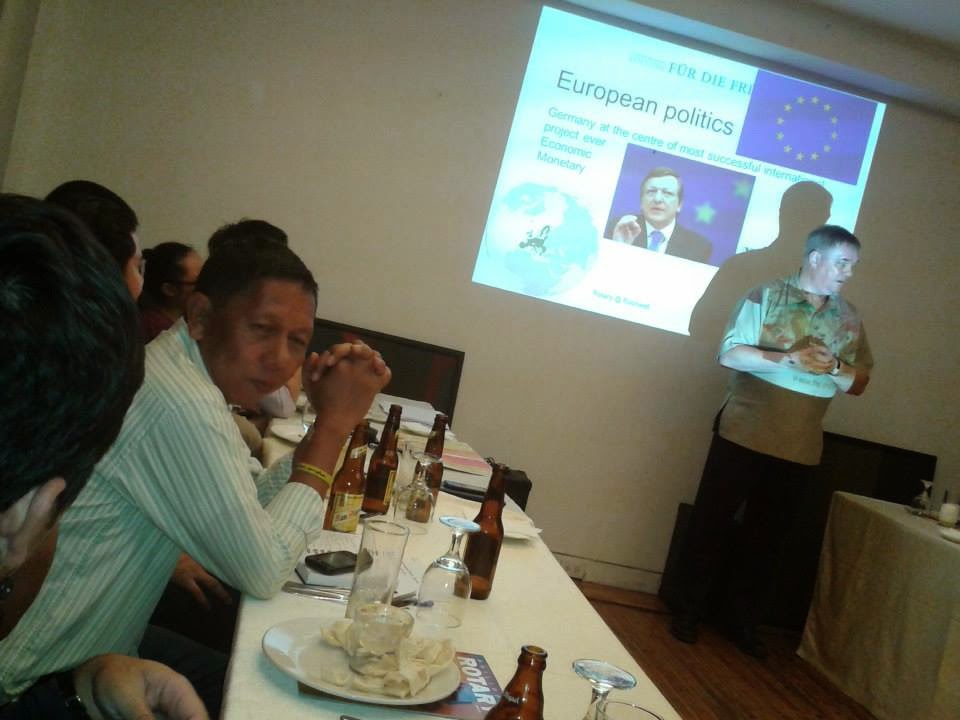 But recently, there have been dissociation from Europeans. Like moves in some countries to get out of the Euro, get out of the monetary union and the ECB, and re-establish their own national currencies. There will be a European Elections this coming May 22-25 2014. 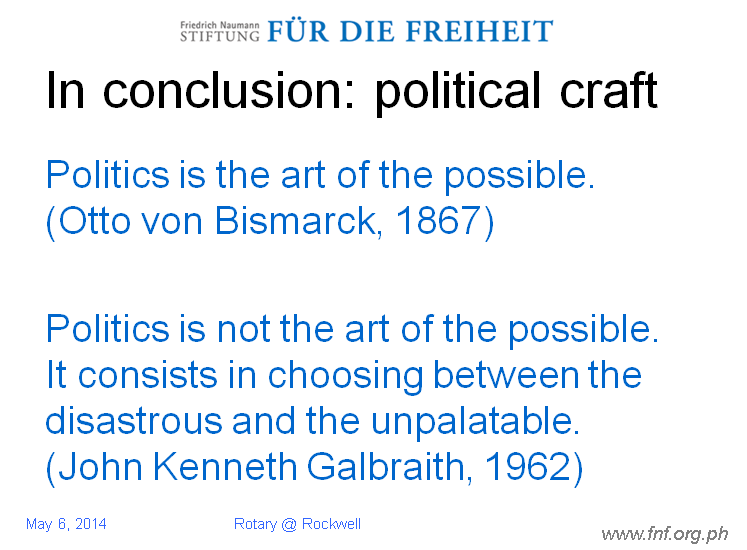 Another quote from his presentation:

"The challenge is to practice politics as the art of making what appears to be impossible, possible."
(Hillary Rodham Clinton, 1969)

The discussion during the open forum was lively and diverse. From philosophy to Europe to Philippine politics and the PNoy Aquino government. 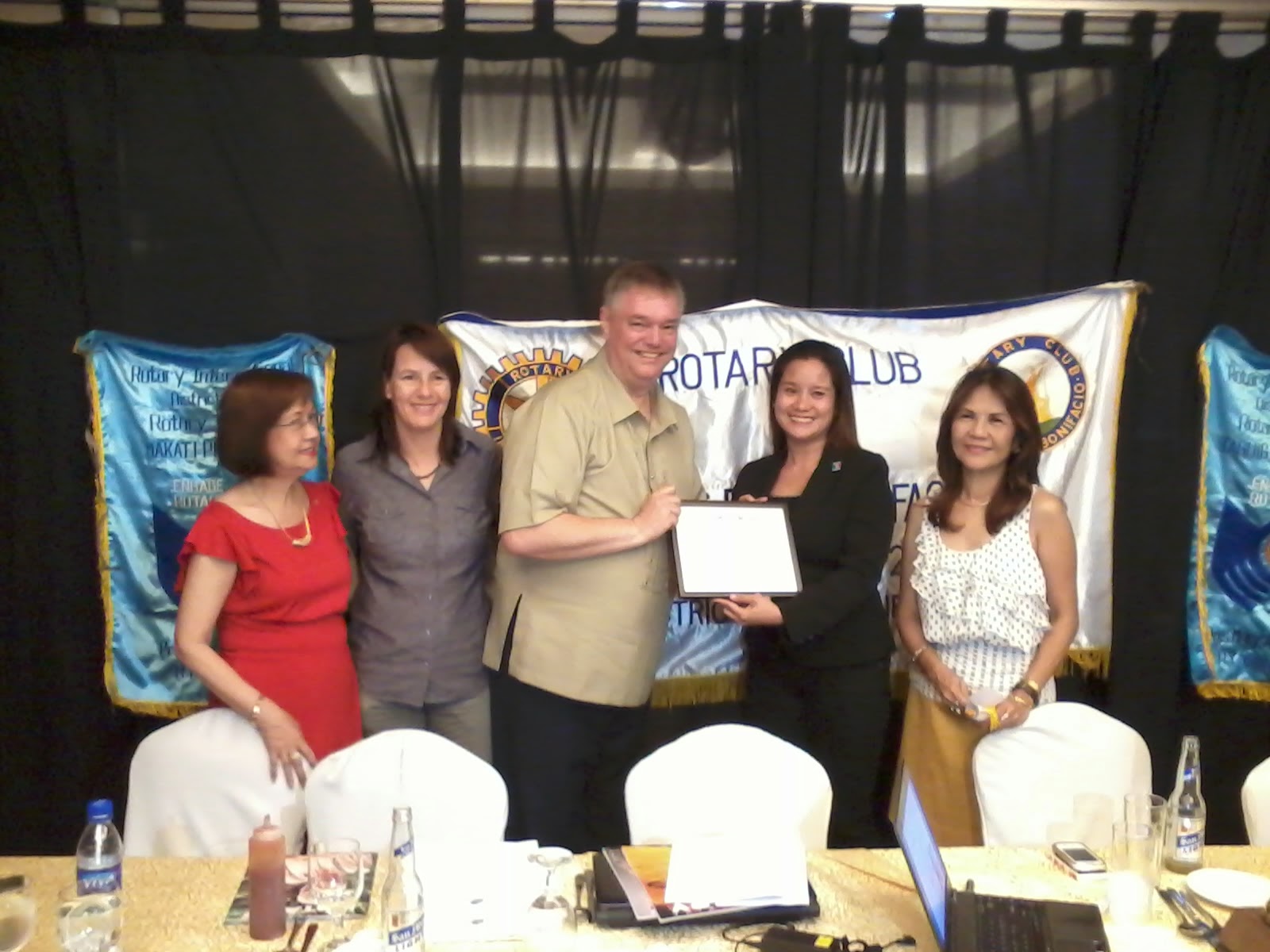 A cake as additional recognition for his thoughts that night, from FCP Dess. 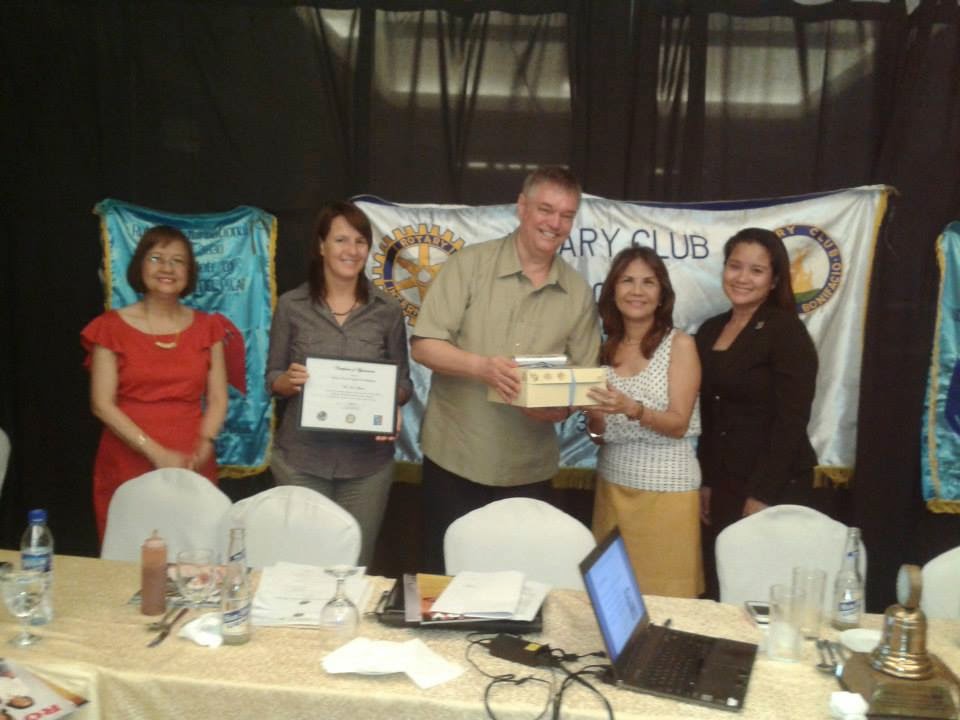 Thanks again for that very educational evening Jules. 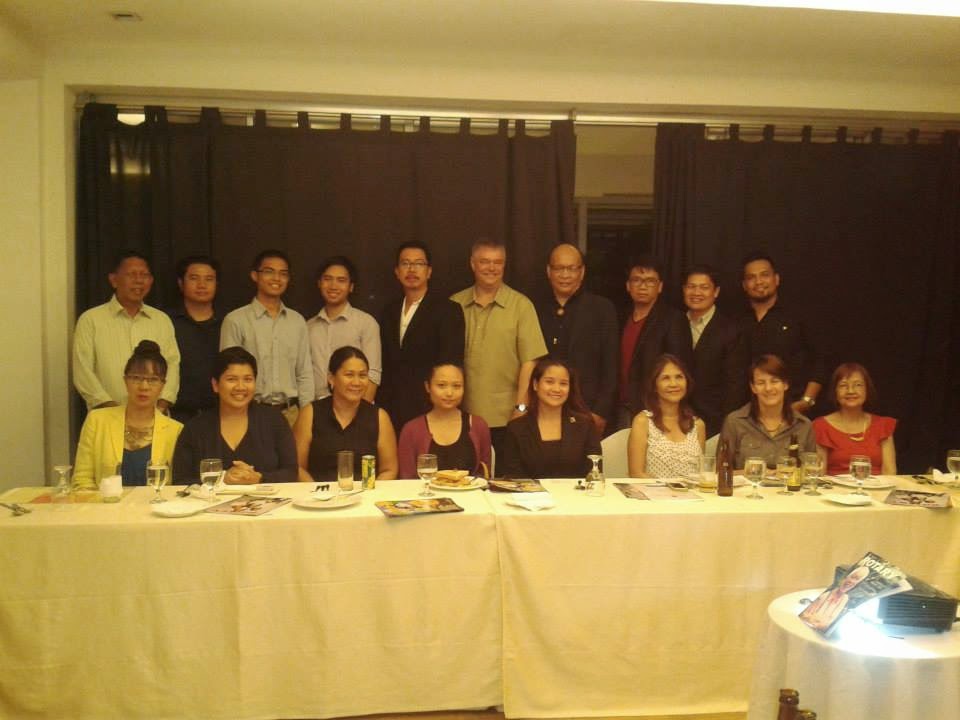 Jules also enjoyed the night. While he has spoken at the European Parliament, in various fora in Europe and Asia, it was his first time to speak before rotary clubs.

The full presentation plus photos is available here in slideshare.
-------------