On MERS CoV and OFWs

This is my sister in law, Gemma Barilea-Oplas, holding my elder daughter Elle Marie, and beside her lone child, Lois, sometime in late 2010 in our province in Neg. Occ. Elle is now 7+ years old while Lois is 13 years old. Gemma is an OFW, a nurse in King Fahd Medical City (KFMC) in Riyadh, Kingdom of Saudi Arabia (KSA) for more than a decade. It's a big Saudi government hospital. 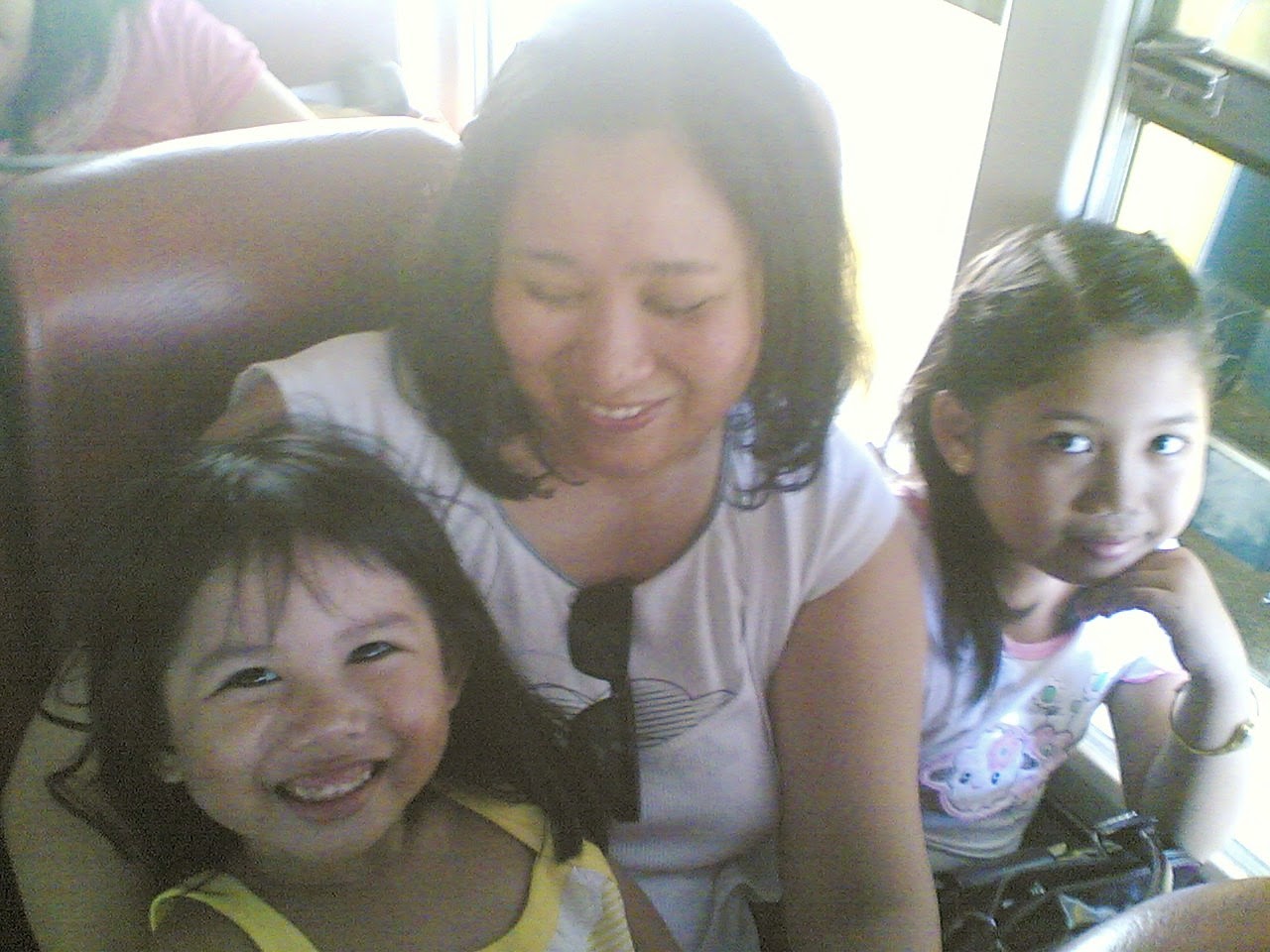 Gemma died the other day. It was a fast death. Confined in the same hospital where she was working last Wednesday night (KSA time), she was able to call my younger brother, Bobong, to inform him of her situation. A tube was put in her mouth by Thursday, she accepted Bobong's call, their last conversation.  ICU by Friday, renal failure and plummeting BP by Monday, dead by Tuesday, this week.

Bobong and Lois stay in Cadiz City, Negros Occidental, my hometown. He wanted to fly to Saudi, he went to Bacolod City last Monday for his passport application, was told that his passport will be released May 26. Too long, he contacted me, so I contacted a good friend way back in UP Diliman in the 80s, now DFA Assistant. Secretary Eddie de Vega for help. DFA responded with speed and efficiency, I am very thankful of them. But bad luck has taken over.

Yesterday, I got my brother's passport at DFA even though he will not fly to Saudi anymore. DFA Asst. Sec. Fred Santos personally attended to me. Thanks again ASec.

Gemma's death is suspected to be caused by the Middle East Respiratory Syndrome - Corona Virus (MERS-CoV): ASec Santos brought me to DFA Under Secretary Jesus Yabes' office, to ask how the DFA can help bring back the body. PH embassy in Riyadh has no knowledge about her death. The hospital has imposed a news bllack out about her case, and most likely similar cases involving their sick staff. ASec Eddie and I are of course disappointed. How can the PH government, DFA in particular, deal with this, how grave is the problem, if some Saudi government hospitals have this poicy?

Maybe the hospital wants to further study the body whether it is indeed MERS-Cov or any other disease which caused the death. But they should have informed the PH embassy.  The news black out policy by the Saudi government hospital, even if done temporarily, strengthens suspicion that the MERS CoV problem there could be worse that what the Saudi government would reveal to media and the public. Similar to China government's news sanitation policy when SARS spread there and killed several people. The actual death toll was higher than what was reported.

A lawyer friend working at the DOJ, Jojo, commented,

That is a problem Noy. But this Merscov is taking its toll on our OFW health workers in Saudi. The government should act with the same urgency as it did when it published the names of a plane load of OFWs and asked them to come in for tests. By now the Philippine Embassy in Riyadh should already have an action plan on how to respond to our OFWs who fall to the Merscov. Maalarma na sila para sa mga kababayan natin na na-expose na sa Saudi, hindi lang sa pag naglanding na sila dito sa Pinas at madadamay tayo at saka pa lamang aaksyon ng lubos. The highest diplomatic measures should already be undertaken as we speak to protect our OFWs in Saudi from the Merscov.

Jojo is right. My brother asked for a copy of Gemma's medical abstract through her close friend, also a Pinay nurse in the same hospiital. I hope they can give the abstract. It is not official yet if it was MERS CoV or other disease that killed Gemma. But when she was confined last Wed, all the symptoms of the disease were with her.

I discovered last night that the Inquirer has reported it the other day. 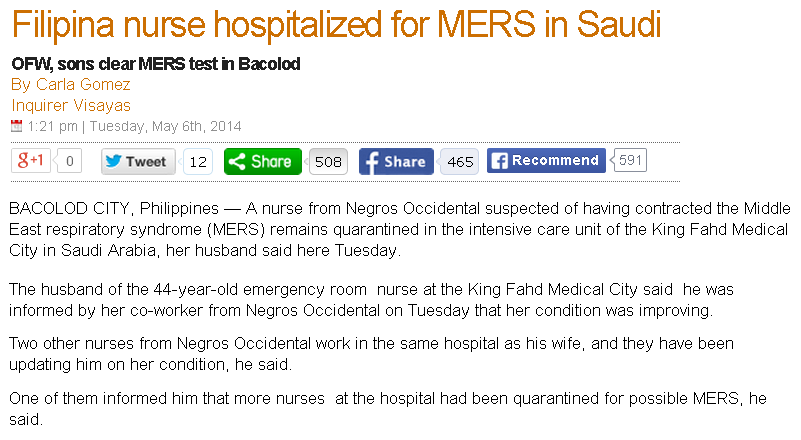 "Public concern over the spread of MERS mounted earlier this month after the resignation of at least four doctors at Jeddah's King Fahd Hospital who refused to treat patients for fear of infection...."

I think the PH Embassy in Riyadh will contact KFMC to get the official report, even if the latter will insist on its news blackout policy, implicit or explicit.

I do not know if the hospital will take it against my brother that I write this story as this may put them in a bad light somehow. But it is for the benefit of both KSA and PH governments and the public in general in both countries, if there is more transparency how grave or non-grave the situation of MERS incidence is in KSA.

To Gemma's siblings, parents, relatives and friends, in Cadiz and elsewhere, this is a sad reality that we have to accept, including the delayed repatriation of her body back home.

Thanks to many friends who expressed sympathy when I posted this note in my fb account last night,
----------

I'm Sarah from MAKE Productions in Singapore and I've been trying to reach you. I sent you an email to your Yahoo email address and I hope you'll be able to respond.

Thank you and I look forward to your reply.