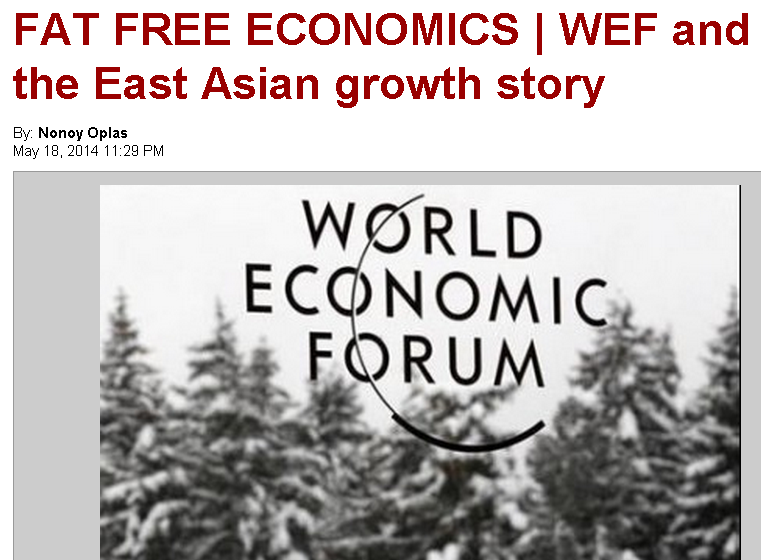 MANILA - The World Economic Forum (WEF) is among the unique inventions in promoting global economic and social dialogue among many sectors of different countries around the world.

While the United Nations and its many affiliate organizations (WHO, ILO, IMO, WMO, FCCC, etc.), WB, IMF, WTO, OECD, APEC and other multilateral institutions are all government clubs, or composed of governments only, WEF and similar international fora are private sector-initiated, invite participants from governments, multilaterals, corporations, civil society and academe, and are able to attract many high-profile participants from these sectors even if they have to pay hefty registration fees.

The WEF on East Asia forum 2014 will be held this week in Manila. Several heads of state, cabinet officials, CEOs of big corporations (national and multinational), heads of civil society and other organizations are attending.

Since high and sustainable economic growth – which expands businesses and material wealth, creates jobs, lifts many people from poverty – is often the key concern of WEF and other international fora, the best region to hold it is in East Asia. Growth here is generally much faster and has been sustained for decades more than in other regions.

I dug up the IMF World Economic Outlook Database, April 2014 for GDP size of the biggest economies in the world for the past two decades. I used data for 1993, 2003 and 2013, particularly the purchasing power parity (PPP) valuation of GDP as it has a more comparable pricing of goods and services produced in the economy. 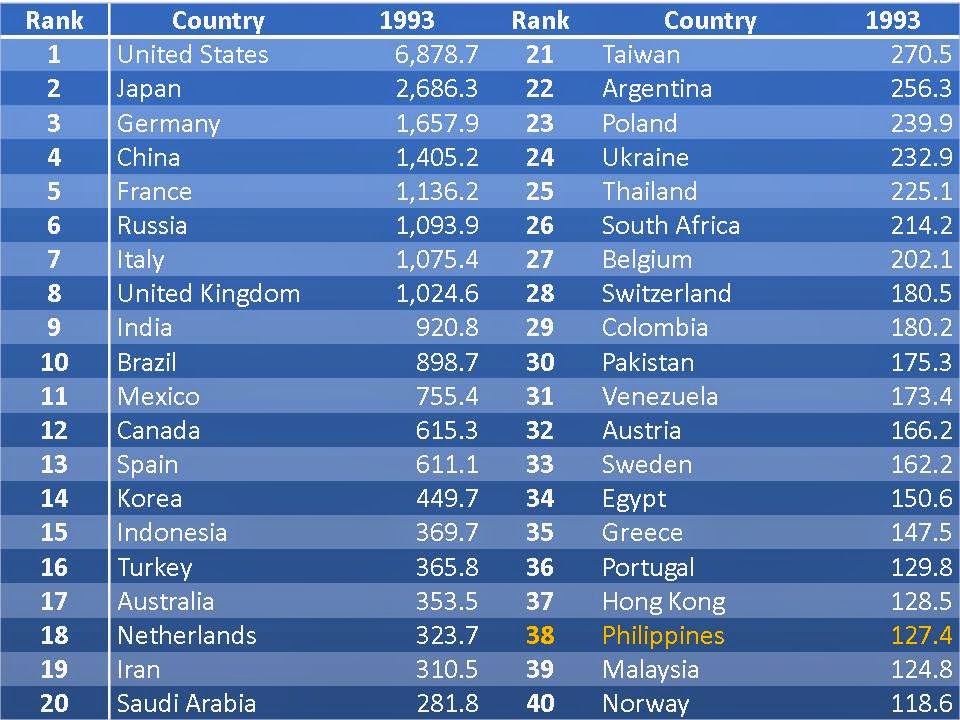 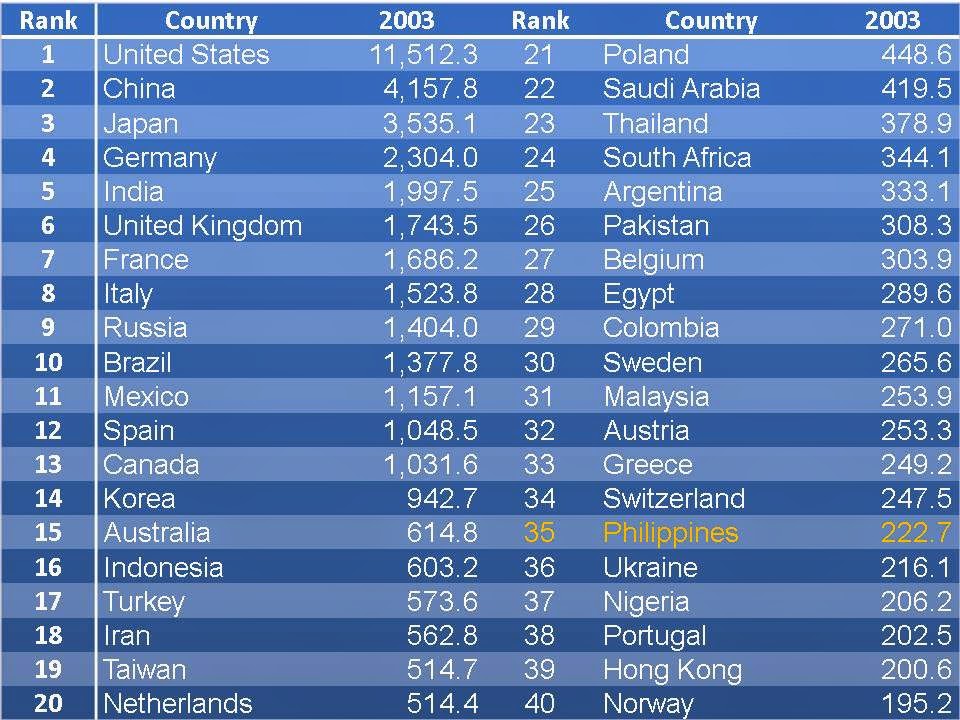 The World Trade Organization (WTO) was created in 1995 and it heralded the start of fast growth in many economies, especially some emerging markets like China, India and Indonesia. This is because protectionism limits a country’s growth through (a) limited size of consumers and (b) limited source of raw materials, intermediate products and capital goods that can further expand the economy’s productive capacity. Free trade, or even reduced protectionism allows private enterprises to address these two limitations somehow.

After another decade – and despite the various international financial turmoil (housing bubble burst in the US 2008-2009, European debt upheavals 2010-2012, among others), many economies in Asia were able to withstand the uncertainties. Early this decade, three of the four biggest economies in the world were in Asia. And two Asian economies that were outside the top 40 in the last two decades – Singapore and Vietnam -- were able to barge in.

Other emerging economies which joined the top 40 were Nigeria, Venezuela and Peru. And a number of European economies were dislodged from the top 40, like Austria, Greece, Ukraine, Portugal and Norway (see table 3 below). 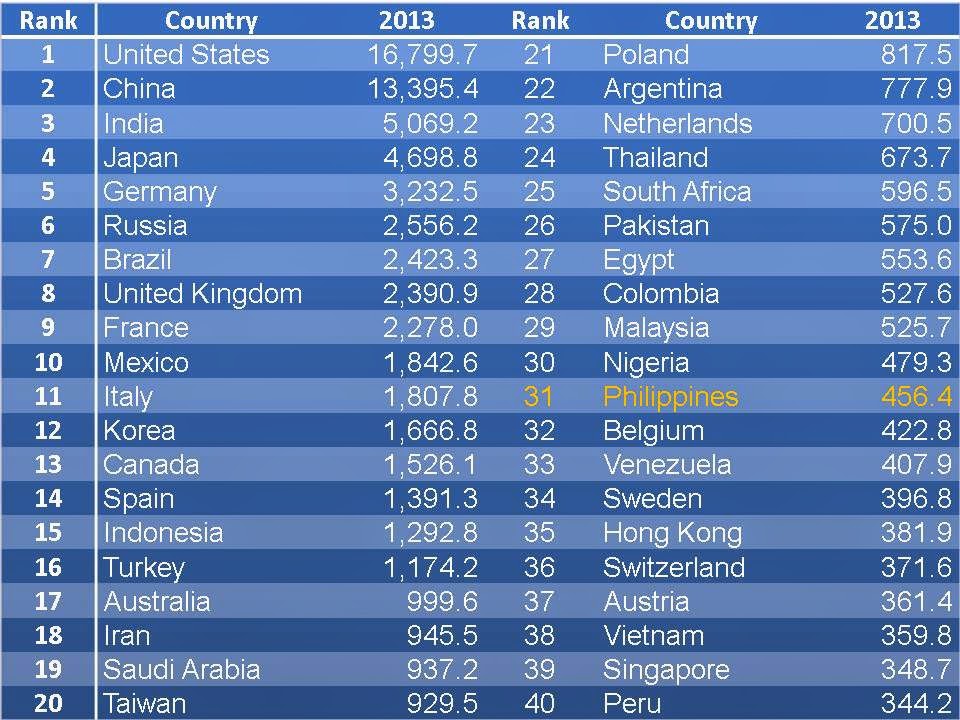 That is what increasing globalization and mobility of people, their products and services, technology and capital, can do. To reallocate resources to areas where they are needed more, or priced better. Notice also that many of the top 40 economies are also countries with big populations. People are the planet’s most important resource.

Let’s analyze some Asian economies closer. Many of them were able to expand their economies by four times or more in just two decades. That’s a short period of time compared to a century or more for the industrial countries during an earlier period.

Ironically too, two socialist economies -- China and Vietnam -- were able to optimize the opportunities of global capitalism and the generally free trade policy that dominate globalization. The Philippines was among the modest benefactors of globalization (see table 4 below).

Table 4. Biggest economies in East and South Asia, GDP based on PPP, in billion US dollars 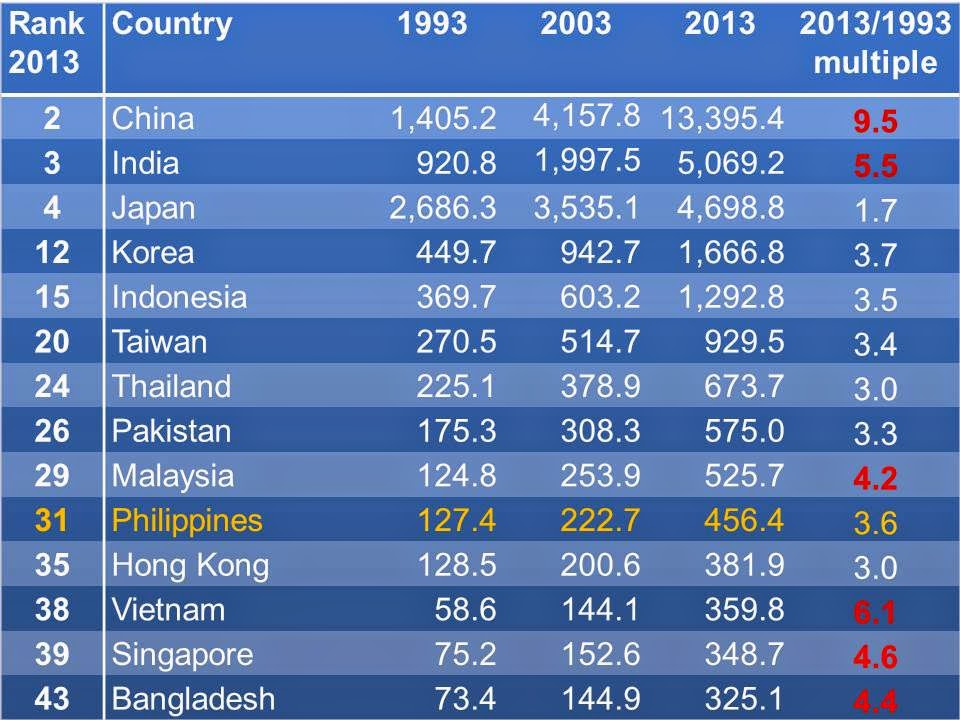 In comparison, not a single economy from North America and Europe was able to grow three times their size two decades ago. Germany and Italy failed even to double their GDP size within that period.

Of course, these economies can brag that they were already on a high base, so that incremental growth was not fast anymore. This may not be a good explanation because of their ageing populations, tens of millions of their people need to be supported by more economic activities, especially in healthcare.

Table 5. Biggest economies in America, Europe and Australia, GDP based on PPP, in billion US dollars The WEF is roosting on the region which has proven to be among the important engines of global growth. And it’s a region that will sustain the growth momentum and pace the rest of the world. This region has the world’s biggest populations, meaning the biggest number of entrepreneurs and workers, of producers and consumers.

Asia needs to learn from Europe and North America. That heavy welfarism and bureaucratism are anathema to more growth and prosperity. Business and entrepreneurship is most dynamic when it is left alone to innovate and become more creative, more competitive.
------------