(Note: the original title of this paper was "When government is breeding ground of criminals". I changed the title to reflect a new discussion series on "Crime and Rule of Men".) 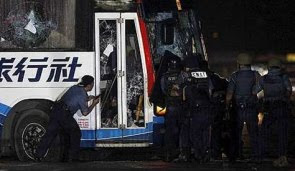 The hostage-taker-criminal in the tourist bus incident yesterday, Rolando Mendoza, was a former police captain. He was dismissed last year because of charges of robbery, extortion and grave threats filed against him and 4 other police officials by an employee of one hotel in Manila.

He was angry, so he has to resort to terrorism, by taking a bus full of tourists from Hong Kong, used the foreign visitors as his hostages to impose his demand -- that he should get back his past position as a police official. Whether he was unjustly charged or not, hostage taking is never a sensible solution to assert one's demand, personal or political.

The focus of public discussions was how the Philippine National Police (PNP) handled the crisis -- why it took them 12 hours to end the crisis, why so many dead hostages, why a lot of questionable, if not idiotic actions were commited prior to the storming of the bus, etc.

As expected, many potential foreign tourists, especially from Hong Kong and mainland China, cancelled their trip to the Philippines. The HK government even issued a "black" travel advisory to their citizens not to visit the Philippines.

A number of blogs in China had some angry and satirical comments against the Philippine police. Some negative comments were directed at the "monkey" Filipinos. See this popular blog about China and Chinese people for non-Chinese-speaker readers, http://www.chinasmack.com/2010/stories/philippines-hostage-crisis-ends-many-dead-chinese-netizen-reactions.html

The big issue is that the criminal, the hostage-taker-killer, is a former government personnel, armed and dangerous. He's got government-issued armalite and ammunitions, government-conducted training. Such deadly combinations when used to threaten ordinary civilians is very dangerous.

I think the criminal was angry that while he was charged (convicted?) as a police extortionist, he knew that many PNP officials are also extortionists. But those guys kept their positions, some were even promoted, so why was he singled out? To get back his position and to become a future criminal in police uniform, he has to do a criminal act of using foreign visitors as his hostages to pursue his personal agenda.

And true to being a criminal, he killed some of his hostages and fought it out with policemen in active duty.

His death though, will not end a bigger danger: the government as breeding ground of criminals in uniforms. Those criminals are not many, they may be few, but even one criminal -- an extortionist, a murderer, a kidnapper, a carnapper, etc. -- is enough to taint the image of the PNP as an institution.

So long as government people do not fully appreciate 100 percent, the importance and value of the "rule of law", the temptation to use their position to perpetuate the "rule of men" will always be there.
-------