Global cooling is getting harsh this year.

Consider the following headlines, all of which refer to July and/or early August 2010events:

2. "Cold wave kills 6 million fish in Bolivia", with a picture of so many dead fish. Authorities there called it "an environmental catastrophe." Not because of global warming but with global cooling.
http://www.topnews.in/law/cold-wave-kills-six-million-fish-bolivia-222874

3. "Snow in Brazil, below zero Celsius in in the River Plate and tropical fish frozen", that also talked about the cold snap in Argentina and Uruguay,
http://www.climatechangefraud.com/climate-reports/7454-snow-in-brazil-below-zero-celsius-in-the-river-plate-and-tropical-fish-frozen

The original article is published in German language, Readers Edition, at
http://www.readers-edition.de/2010/07/02/kaelteste-erste-jahreshaelfte-seit-15-jahren/

The reason for such severe cold snap in South America, and the official appearance of La Nina in the Pacific Ocean, can be seen in this graph. The blue color represents cold ocean water moving fast from east Pacific (S. America) to west Pacific (E. Asia). Data as of July 29, 2010.

So if we wonder why we hardly see the Sun the past few days, expect even darker skies in the coming weeks and months. Would people still consider this as "man-made global warming"?

More news stories of the creeping global cooling can be cited, but let us stop at those 5 above, and focus our attention now on sea ice extent in the Arctic (northern hemisphere) and Antarctica (southern hemisphere).

The pictures and graphs below should convince people that there is no such thing as "ever-melting polar ice", and its lousy conclusions like "ice-free Arctic summer in 5 to 10 years."

There is one site that gives all the most updated data, as of the other day, of the Arctic and Antarctica, http://wattsupwiththat.com/sea-ice-page/

I suggest that readers visit that site regularly to disabuse ourselves of idiotic claims of "ever-melting polar ice", http://wattsupwiththat.com/sea-ice-page/ 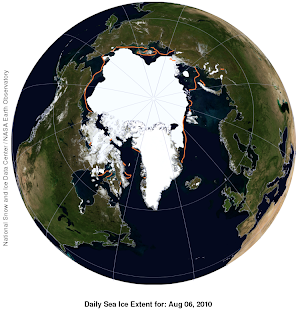 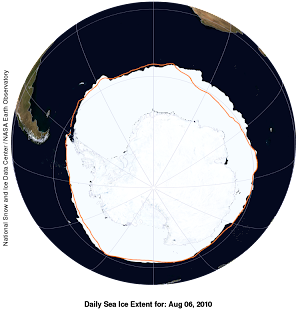 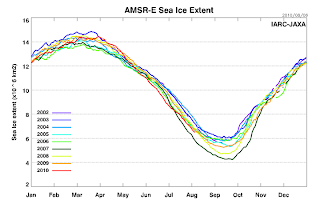 3. Graph, Arctic ice extent, data from the International Arctic Research Center - Japan Aeronautics and Aerospace Administration (IARC-JAXA), as of August 6, 2010. Data for 2010 shows lower than the levels early this decade, but higher than those in 2007 and 2008. 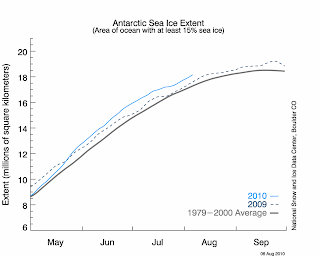